In Syria Anti-IS force says near ‘final’ week of Raqa fight US-backed fighters battling to oust the Islamic State group from Syria’s Raqa were nearing the “final week” of their assault, the campaign’s commander told AFP on Sunday. 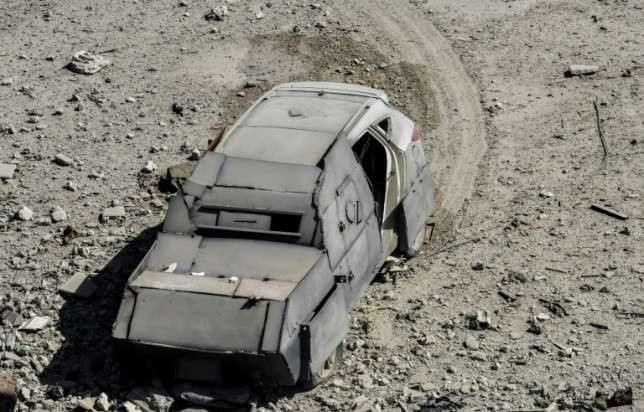 US-backed fighters battling to oust the Islamic State group from Syria’s Raqa were nearing the “final week” of their assault, the campaign’s commander told AFP on Sunday.

The Syrian Democratic Forces have captured around 90 percent of IS’s one-time bastion and are closing in on the jihadists in a pocket of territory near Raqa city centre.

Captured by IS in 2014, the northern Syrian city was the de facto capital of the jihadists’ self-styled “caliphate” until the US-backed assault.

The SDF alliance’s Kurdish and Arab fighters are advancing on IS-held districts from two fronts in the city’s north and east, said Rojda Felat, who heads the “Wrath of the Euphrates” campaign.

Rojda Felat, a Syrian Democratic Forces commander, speaks to AFP on the western front line in Raqa on October 8, 2017

“If the two fronts meet, we can say we have entered the final week of our campaign to liberate Raqa,” Felat told AFP on the western outskirts of Raqa on Sunday.

“Within 3-4 days, we will be able to take the decision to begin the final campaign,” she added.

Felat said fighting was still fierce along the front line, with IS using snipers, suicide bombers and reinforced positions in tunnels to hold up the SDF advance.

SDF fighters have surrounded the hospital and were on Sunday preparing a fresh push around the stadium further north, said Ali Sher, a field commander with the Kurdish People’s Protection Units (YPG), which make up the bulk of the SDF.

Members of the Syrian Democratic Forces at a front line position in Raqa on October 8, 2017

“We will advance at night on foot into new positions around the stadium’s north. It will be the first time we use this military tactic in Raqa,” Sher told AFP.

As he spoke, Sher fed bullets into a rifle magazine in one of several bombed-out apartment buildings taken up by his fighters to monitor different parts of the stadium.

One room provided a clear view of the field’s edge and surrounding buildings.

An anti-IS sniper lay flat on furniture piled in a corner, peering out of a melon-sized hole in the wall, his finger on the trigger.

Another building overlooked the stadium’s abandoned entrance. SDF members said they expected IS fighters were holed up in the complex’s seating areas or underground rooms.

“The battle is in its final steps. When we finish with the area north of the stadium, we’ll be able to attack it and reach Al-Naim,” Sher said.

Al-Naim roundabout in Raqa became infamous for the public beheadings and crucifixions IS staged there during its three-year rule in the city.

Tens of thousands of people have fled Raqa since the US-backed offensive broke into the city in June, but IS is suspected of using several thousand civilians still stuck in the city as human shields.

As the SDF pushed ahead around the stadium on Sunday, more civilians dared to make their escape.

Qandil, a Yazidi fighter based in a building overlooking the stadium, said he was manning his sniper position at 4:00 am when he saw civilians emerging from nearby buildings.

“We gave one group of them water, then about half an hour later, another group of 20-25 came out,” Qandil told AFP.

“The total was around 35 people and we took them all to the rear bases,” he said.

Idris Mohammad was among them.

He fled on foot from his home district near the stadium with his wife and two young daughters, Maria and Serene.

“For almost a week, IS fighters tried to force us into the Al-Badu district to keep us with them but we refused,” said Mohammad.

“In the end we found a way and were able to get out. The SDF picked us up from the street,” he told AFP in Hawi al-Hawa west of the city.

The wife of a suspected Islamic State group fighter waits to be questioned after fleeing central Raqa on October 8, 2017

IS has lost swathes of territory across Syria but has put up a fierce fightback, including in the key eastern town of Mayadeen near the border with Iraq.

Jihadists expelled Russian-backed Syrian troops from Mayadeen on Sunday, just two days after the soldiers broke into the town’s west, according to the Britain-based Syrian Observatory for Human Rights.

Syria’s conflict began with widespread demonstrations against the government but has since evolved into a multi-front war that has killed more than 330,000 people.

On Sunday, at least 11 civilians including two children were killed in suspected regime air strikes on a market in the northwestern town of Maaret al-Numan, the monitor said.