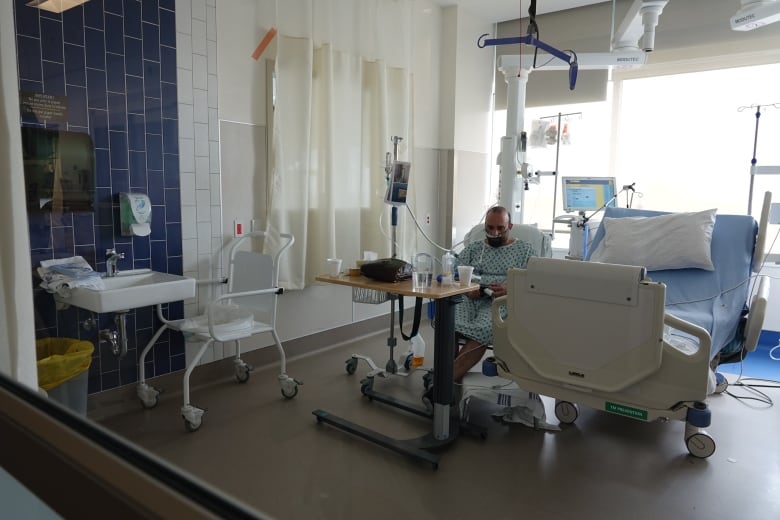 It’s still hard for Ramtin Saeedi to breathe or talk. His words are slow and deliberate. He has to catch his breath between sentences.

“The first day I arrived here, I was in the midst of dying,” the 46-year-old said while sitting in a chair in his room in the intensive care unit at Montreal’s Jewish General Hospital.

He’s behind a sliding glass door in a negative pressure room, with an oxygen tube running through his nose.

Saeedi has been in the hospital since April 13. He said he thinks he caught the virus from his son, a university student studying online at home. The whole family was infected.

In recent days, Saeedi’s condition has improved. He praises the hospital staff who have helped him.

“They have been so kind, it’s a good team,” he said, holding his hand to his chest in a gesture of gratitude.

Across Quebec, the number of COVID-19 cases and hospitalizations appears to have stabilized, although challenges. remain. Hospitals are treating younger patients, often for longer periods.

In the Jewish General’s ICU, the second and third waves of the pandemic have blurred into a relentless grind. The hospital has treated nearly 300 critically ill COVID-19 patients since the pandemic began — and staff know it’s not over yet.

“We’ve been doing this consistently for over a year now, which is exhausting,” said Dr. Paul Warshawsky, head of the hospital’s ICU.

“We’re all kind of tired of it. We’re hoping that the third wave is the final lift.”

In the trenches of COVID-19

A few doors down from Saeedi’s room, Zannatul Ferdush can barely recognize her husband of 29 years, Shamim Mohammed.

The 62-year-old, who has been in the ICU for more than a month, is unconscious and connected to a ventilator to help him breathe.

“For me, it’s a big tsunami,” Ferdush said. “It’s a very dangerous disease and it can ruin your life, your family. Everybody, look at us.”

She holds up a picture on her phone of herself and Mohammed two years ago. They are on a beach, standing in front of the water, smiling happily.

It is a stark contrast from the man now beside her in the ICU. His doctor says Mohammed has lost significant muscle mass and is unable to move any of his muscles on his own.

Ferdush says her husband has been extremely cautious in following public health rules since the start of the pandemic. But he works in a restaurant kitchen, and she believes he caught the virus from a co-worker during their lunch break.

Ferdush and one of their two children also got sick. She is able to visit her husband in the hospital and stands by his bedside, holding his hand, wearing a visor, gloves, an N95 mask and a protective yellow hospital gown.

Dr. Blair Schwartz, one of the ICU doctors treating both Mohammed and Saeedi, says the virus can be a roller-coaster. Understanding its trajectory in different patients can be hard and humbling for a physician, he said.

“The thing we’ve learned with COVID is it will go in whatever direction it’s destined to, and it’s hard sometimes to predict.”

Amid the exhaustion and uncertainty, health-care workers in this ICU say they are also facing doubt from some patients who don’t believe the virus that is making them sick actually exists.

“We have people who have COVID who don’t believe in COVID, which is just awkward because it’s hard to treat them at that point,” Warshawsky said.

“We have to try and persuade people that we really do know what we’re talking about. We’ve treated a lot of patients with this condition at this point.”

Warshawsky said patients in the third wave are younger, in part because many older people are now protected by vaccines. But he says these patients stay in the hospital longer, and more of them need to be put on ventilators.

When Saeedi’s condition improved enough for him to leave the ICU, he was wheeled out of the unit followed by a cleaning crew, there to wipe down any surface he might touch along the way.

He was discharged shortly after, to recover at home.

Patients who pull through and eventually get better is what Schwartz says give him hope for those stuck in the trenches of their illness, as well as for their families.

“That’s the hope that we keep. That’s what keeps the team motivated,” he said.

Schwartz said he wants to pass that hope on to worried family members, too — the possibility that their loved one might also pull through.

“It’s unpredictable, it’s changing,” he said. “That’s the humility of being an ICU doc in COVID.”