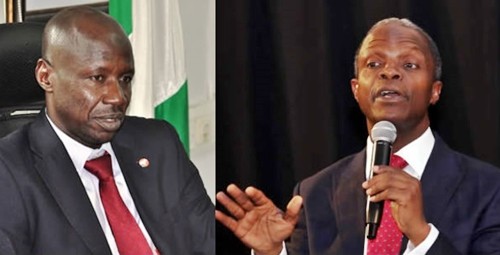 ABUJA – The Resource Centre for Human Rights & Civic Education (CHRICED), Friday, called on the Acting President, Prof. Yemi Osinbajo, to refuse to be cowed, saying Nigerians are fully behind him in his efforts to uphold national security.

The Executive Director of the group, Com. Ibrahim Zikirullahi said under the constitution of the Federal Republic of Nigeria, the Acting President is empowered to deal with any threat to the constitutional order in the country.

Reacting to the recent provocative outbursts from the National Assembly, threatening to impeach him over Ibrahim Magu’s continuous stay in office as Chairman of the Economic and Financial Crimes Commission (EFCC), CHRICED observed that such threat was aim at undermining Nigeria’s democratic and constitutional order, and that, it should “not be treated with a with kid gloves.”

Zikirullahi, in a statement issued in Abuja, added that in spite of President Muhammadu Buhari’s health challenge, there is no vacuum in government, describing the senate threat as a test for the sinister motive by the Senate President, Dr. Bukola Saraki to grab power through backdoor.

The group warned that “there would be severe backlash from the Nigerian people, should these desperate elements make good their threat.

“We call on the Acting President, not to treat this development with a tepid response. In the interest of national security, there is an immediate need for the relevant agencies to be on red alert to thwart the plans of the enemies of our country.

“Despite President Buhari’s health challenge, and the fact that his sworn enemies, the perpetrators of corruption, are daily wishing him dead, there is a constitutionally-recognized Acting President in place.

“There is no power vacuum whatsoever to warrant the conversations that have now become the main preoccupation of the National Assembly, especially the Senate. Any attempt to grab power through the back door, would be stiffly resisted by the people of this country.

“CHRICED again admonishes Acting President Yemi Osinbajo, to assert his powers as conferred by the Constitution by decisively dealing with any threat to national security and the constitutional order.

“The Acting President should understand by now that the arrow-heads of these threats do not believe in democracy; they are only interested in naked power, which they have always used, not in the service of the Nigerian people, but for their own personal aggrandizement. By their nature therefore, the overt and covert activities of these characters without conscience, portend a grave danger to the polity.”

Consequently, Zikirullahi called on “the international community to exert the necessary pressure and send a clear signal that no rascally threat to power grab would be tolerated.