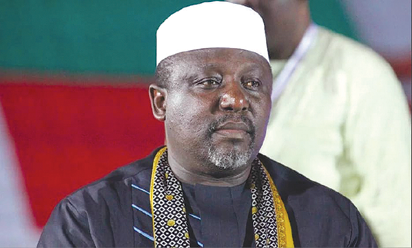 Okorocha disclosed this through a release issued to newsmen in Owerri by his Chief Press Secretary, Mr Sam Onwuemeodo.

He also confirmed that his government had received the current Paris Club refund to the tune of N7 bilion from the Federal Government, adding that salaries would also be paid with the Paris Club refund.

According to the release, “this is to inform Imo people and all those keen in the affairs of the state that the governor, Owelle Rochas Okorocha, has confirmed the state’s own share of the latest Paris Club Fund of N7billion.

“And the money will be used to clear 2017 outstanding pensions since the government had earlier cleared all the past pension arrears up to December 2016 and had then assured to begin to pay the pensioners at the end of every month with effect from January 2017.

“The government kept this promise in abeyance following the steady and disturbing increase in the number of pensioners and the amount involved, worrisomely snowballing to more than N1.5 billion.

“The government would also use part of the refund to pay salary, although the state government does not have any outstanding salary to contend with.”