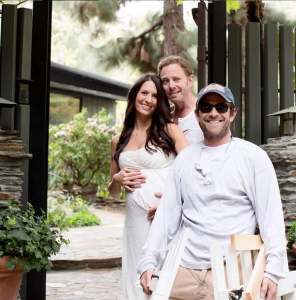 Ziering, 54, posted a sweet throwback photo with his wife, Erin Ludwig, and the late actor via Instagram on Tuesday, March 5. The group were all smiles as Perry held planks of wood and painted gates while his former costar and pregnant wife were in the middle of a photo shoot.

“The day Erin and I were shooting maternity pictures, Luke decided I needed a fenced-in area to keep the baby safe in my backyard,” wrote Ziering, who shares daughters Mia, 7, and Penna, 5, with Ludwig, 34. “Circa 2011. #riplukeperry.” 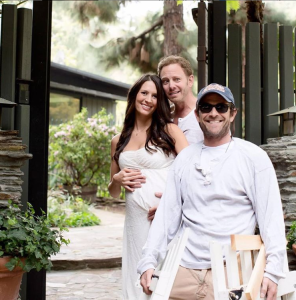 Us Weekly confirmed on Wednesday, February 27, that Perry had been hospitalized after suffering a massive stroke at his home in Los Angeles’ Sherman Oaks neighborhood. He died on Monday, March 4, at age 52.

“Perry was surrounded by his children Jack and Sophie, fiancée Wendy Madison Bauer, ex-wife Minnie Sharp, mother Ann Bennett, stepfather Steve Bennett, brother Tom Perry, sister Amy Coder and other close family and friends,” the Riverdale actor’s rep said in a statement to Us at the time. “The family appreciates the outpouring of support and prayers that have been extended to Luke from around the world, and respectfully request privacy in this time of great mourning. No further details will be released at this time.”

Ziering took to Instagram after the news broke to reflect on his friendship with Perry. “Dearest Luke, I will forever bask in the loving memories we’ve shared over the last thirty years,” he captioned a snapshot of the duo embracing. “May your journey forward be enriched by the magnificent souls who have passed before you, just like you have done here for those you leave behind. God please give him a seat close to you, he deserves it.”

Many of Perry’s other former Beverly Hills, 90210 costars have also mourned him via Instagram. “I’m struggling with this loss and am having a hard time with my thoughts,” Shannen Doherty, who played Perry’s love interest, wrote. Added Randy Spelling, whose late father, Aaron Spelling, produced the show, “My thoughts and good wishes go out to his family. A good guy with a good heart. You will be greatly missed Luke.”