‘I don’t know how I’m gonna go back to the office’: COVID-19 forces women to rethink careers 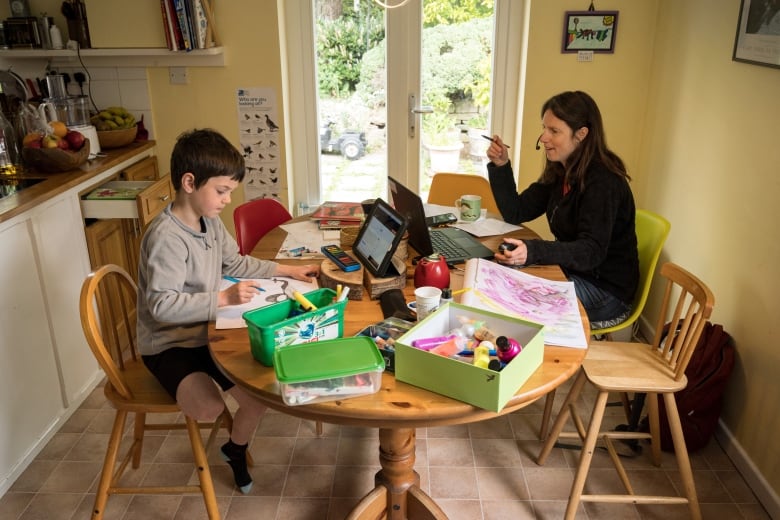 The hushed late-night hours are rare moments of peace for the mother of two, as she attempts to juggle childcare and a demanding professional career during a pandemic.

Dei-Amoah, 47, counts herself fortunate. Her full-time job as a manager of executive pensions at TD Bank in Toronto has continued uninterrupted, shifting entirely to work-from-home.

But demands on her time have grown exponentially. With schools closed, she’s managing online learning for her kids, aged 6 and 10, mediating sibling quarrels, and serving up three meals a day for the family.

Her mental capacity is maxed out, she says, “because it’s like, I’ve got to think about all these things and still think about my work.”

As the slow process of reopening non-essential businesses begins across Canada, Dei-Amoah is one of many female professionals and entrepreneurs struggling with work-life balance.

She’s unsure what to do with her kids this summer, with camps no longer an option, and anxious about returning to the workplace, because she’s immunocompromised.

Women bore the brunt of early COVID-19 job losses in Canada, with female-dominated sectors like child care, education, retail, and restaurant workers among the hardest hit.

It’s a crisis some economists have dubbed a “she-cession.” But, as the pandemic wears on, women’s participation in the coronavirus economy may be heading for even rockier times.

With children at home, and families forced to take on more domestic labour, experts predict growing numbers of working women may reduce hours or opt out of the labour market entirely.

“As we think about a working-from-home environment, especially if schools and daycares are closed, guess what? That is going to affect women and their careers the most,” said Pedro Barata, head of the Future Skills Centre, an employment research institute at Ryerson University.

Barata points to studies of dual-income heterosexual families that have found when both men and women work outside the home, the bulk of child care and household labour still falls to women. The pandemic has exacerbated these inequities, he says.

“This could actually be a step backwards rate in terms of the equality between men and women in the workplace and career paths.”

Workplaces will be dramatically different, if and when everyone returns to work, says one expert, but there could be some advantages. 5:49

The pandemic also forced Dei-Amoah’s husband to work from home, but the children see him as the “fun one.”

At first, Dei-Amoah attempted to tutor her six-year-old daughter with her reading difficulties and tackle her 10-year-old son’s math challenges. But, coupled with her banking job, it wasn’t sustainable.

“I was like, ‘You know what? Screw it. I’m concentrating on their weaknesses, not their strengths,'” said Dei-Amoah.

“We turn in some assignments. But I am not stressing over it because it’s just making my workday worse.”

‘The stress is what’s killing me’

In Lisa Iafrate’s case, the pandemic shattered her business ambitions, literally causing her to lose her hair.

“The stress is what’s killing me… because there’s so much out of my control,” said Iafrate.

Iafrate is a go-getting entrepreneur based in King City, Ont., who quit her job several years ago to launch a company called TaLii Towels that sells compact, antibacterial towels.

Iafrate found success in the trade show market, criss-crossing North America to sell her product. But when the pandemic hit, all the trade shows Iafrate booked this year were cancelled, and her online business dried up.

After weeks of depression, she hatched a plan to turn her towels into facemasks, generating enough revenue to employ her 21-year-old daughter and five local seamstresses.

However, as a 60-year-old single-mother hustling to rebuild her business, she’s exhausted by domestic chores around her house, which now doubles as her home office.

“I’m working three times harder because I have to look after the household as well as my business. And the business is already taking up 50 to 60 hours a week,” said Iafrate.

Barata says efforts to jumpstart the coronavirus economy have focused on investment in male-dominated industries such as manufacturing and construction, but politicians need to recognize this economic crisis is different than past downturns.

“Infrastructure investments are going to be key in terms of getting the economy back to work. But so is childcare. So are opportunities for women in terms of training and retraining,” said Barata.

Dei-Amoah says she’s fortunate her bosses have become more understanding of how and when employees work. Her inbox often gets busy in the evening, between 7-10 PM, because many of her colleagues are pulled into childcare in the afternoon.

“It’s increased people’s understanding of what flexibility is in the workplace,” said Dei-Amoah.

“As long as you get the work done, that is OK.”