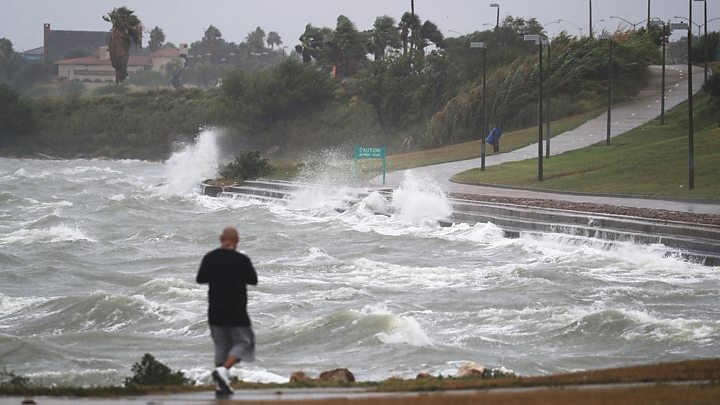 Harvey, currently a category three storm in the Gulf of Mexico, will make landfall on Texas’ central coast late on Friday or early on Saturday.

Greg Abbott has asked for more federal aid for the storm, which may be the worst to hit the US in 12 years.

Mr Abbott said Harvey was now “turning into a very complex and dangerous hurricane”. It is likely to strike at the heart of Texas’s oil refining industry, with Corpus Christi, a port city of 320,000 people, in the path of the storm.

In a letter to President Donald Trump requesting federal aid, Mr Abbott said: “The storm surge, coupled with the deluge of rain, could easily lead to billions of dollars of property damage and almost certainly loss of life.”

How bad is Harvey?

The National Weather Service said on Friday it expected Harvey to make landfall as a category three hurricane, out of a maximum of five.

If it does, it will be the strongest storm to hit the US since October 2005, when Hurricane Wilma struck the coast of Florida.

However, Mr Abbott warned it could even make landfall as a category four. The last category four storm to hit the US was Charley in August 2004.

According to the National Hurricane Center (NHC), Harvey’s wind speed is currently 110mph, though gusts are even stronger.

What are the dangers?

While Harvey is packing strong and potentially devastating winds, the biggest threats to Texas are rainfall and the storm surge.

Oil-rich Houston, the fourth biggest city in the US, could face up to 20in of rain over the coming days, officials there said.

On top of that, the central Texas coast is likely to see a significant storm surge – this happens when low pressure at sea “lifts” tides to a level higher than normal, up to 12ft in this case, and high winds then blow the water inland.

The NHC said it expected “catastrophic flooding” across the coast and in some inland areas throughout south-east Texas.

Parts of Texas are already seeing a storm surge 2.5ft above normal.