How sports and recreation facilities are unequally spread across Montreal 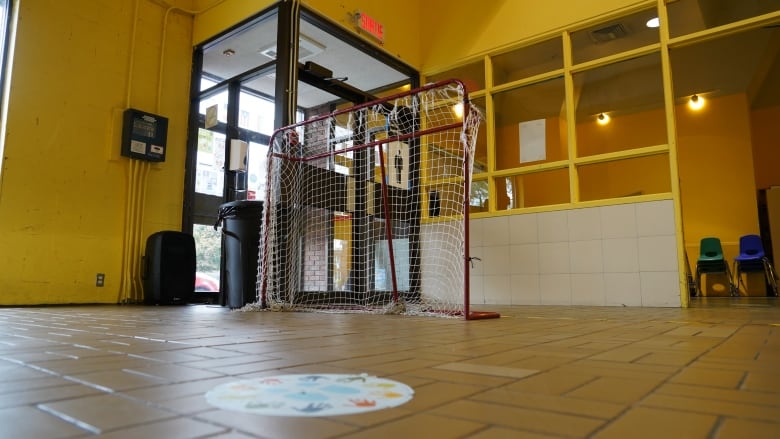 Every day after school, kids gather at the Walkley Community Centre in Montreal’s Notre-Dame-de-Grâce neighbourhood to play soccer, basketball or take part in dance class.

But they have to be careful — the small space rented by the city used to be a McDonald’s, and the restaurant’s old playroom is lined with glass windows vulnerable to an errant throw or kick.

“You can just imagine a McDonald’s without the seating arrangements — and that’s our community centre,” said Sandra Serrano, who runs the centre at the corner of Walkley and Côte Saint-Luc.

“We adapt our activities to what we can, based on the space that we have.”

Serrano, though, dreams of a bigger space that can offer a more complete range of services to the many families who rely on it.

Her borough, Côte-des-Neiges–Notre-Dame-de-Grâce, has the highest number of children of any in Montreal. There are nearly 27,000 kids aged 14 and under.

It also has among the lowest access to recreational facilities in the city, according to a CBC News analysis of data from the City of Montreal.

In examining the data, CBC News found a correlation between average borough income and the number of sports and recreation facilities — both indoor (e.g. pools, arenas) and outdoor (e.g. playgrounds, sport fields).

Near the high end of the spectrum, residents of the affluent borough of Île-Bizard–Sainte-Geneviève have 53 recreational facilities per 10,000 people, while Côte-des-Neiges–Notre-Dame-de-Grâce, one of the poorest boroughs, has the lowest, at 13.2 per 10,000 people.

The findings are consistent with a growing body of research that shows a connection between income and access to services in cities across North America and beyond, said Kevin Manaugh, a geography and urban planning professor at McGill University.

But Manaugh said rectifying those inequalities can be a challenge. In denser parts of the city, which tend to have a lower average income, finding the space for recreational facilities is a challenge, he said.

Making it an election issue

With the Montreal municipal election set for Nov. 6 and 7, Serrano is hoping to hear solutions during the campaign — and in the years to come.

Community centres like hers and others nearby serve a vital role, she said. The Walkley area in particular is home to many new immigrants and low-income households.

The closest recreation centre, Benny Sports Complex, is 1.5 kilometres away — just out of reach for those without a car and a tight schedule. In many cases, it’s too expensive, as well.

Usama Rena, who just turned 21, said that, growing up, the Walkley Community Centre was the “only place we could go and feel safe, with all our friends.”

“It means a lot, because basically it saved us,” said Rena, who now works part time at the centre while studying at Vanier College. He wants to become a paramedic.

Better equipment and improved facilities would be huge for teens who use the centre, said Rena.

WATCH | Usama Rena on why community centres are important:

A safe space for kids

Usama Rena, now 21, grew up in the area. He says the Walkley Community Centre was a place he and his friends were able to go after school. 0:20

In Montréal-Nord, another borough found to have a low level of recreational facilities per capita, all of the main candidates running for mayor, including the incumbent, Christine Black, have promised to make a new sports centre a priority.

Will Prosper, a longtime community activist and the candidate for Projet Montréal, said not enough is being done.

“We have schools that have certain facilities that are not open to all the citizens,” said Prosper.

The nearest large centre, Complexe Sportif Marie-Victorin, is located to the east, on the border of neighbouring Rivière-des-Prairies. But it is part of the Marie-Victorin CEGEP, and shared with residents in Saint-Léonard and Anjou.

Prosper pointed out that Chris Boucher and Luguentz Dort, now local heroes who play in the NBA, both grew up in Montréal-Nord, but had to train at sports centres outside the borough.

“We need to change that,” Prosper said. Black did not return a request for comment.

A ‘sanctuary’ for youth

In interviewing dozens of youth, ages nine to 17, she found community centres act as a kind of “sanctuary,” particularly among low-income and new-immigrant families.

“I think those community centres are really important for young people whose parents may not be at home or just in terms of grounding themselves in Montreal,” she said.

“Those community centres offer programs, but it’s not just about the sports programs that they offer — it’s more about the community that they create and find.”

Simeon Pompey, who grew up in the Walkley neighbourhood, has seen the benefits first-hand. He’s worked in the field of recreation for more than 40 years and ​​sits on the board of directors of Comité Jeunesse N.D.G., the non-profit that oversees both the Walkley Community Centre and the St. Raymond Community Centre.

For the families living in cramped apartments, access to services within walking distance is important, he said.

“We can provide that escape,” he said.

When it first started in the 1970s, the Walkley centre operated out of a residents’ apartment. It has been a challenge to find a suitable space ever since.

Serrano said the scarcity of land and the high price of real estate has made the problem difficult to solve. Other organizations, such as the nearby Loyola Centre, don’t even have their own space.

The Walkley Community Centre has relied on partnerships with the city or school boards to access gyms for some of their programming, but those agreements aren’t always easy.

The centre hopes to be able to offer better facilities if a plan goes ahead to add a community hub to a nearby elementary school, Les-Enfants-du-Monde. The borough put $3.2 million toward the $20-million expansion, which will include a bigger gym and rooms for other activities.

“Whether that happens, we’ll see after the elections,” Pompey said. “What’s on the table for one party may come off with another.”