How much money will Mayweather-McGregor make? 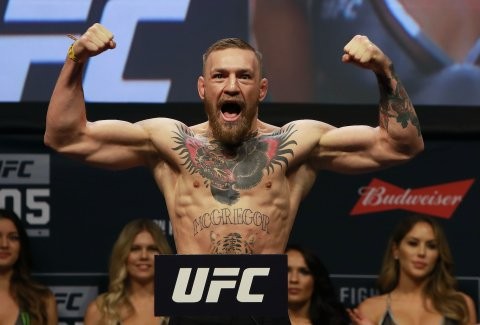 No one talks money more than Floyd Mayweather. His nickname is Money. He’s the figurehead of “The Money Team.” He flaunts his checks, his cars and his winning betting slips.

But there’s a close second and that’s Conor McGregor. McGregor, who collected a $235 welfare check the week before his first UFC fight in 2013, has openly professed his love for cash and has had no problem saying how much he makes — $40 million in 2016, according to the man himself.

So as the talk ramps up to fix the fight that would match up the two biggest money lovers, the question remains: Will it be the most valuable money fight of all time? Mayweather’s May 2015 bout against Manny Pacquiao holds the record, with a total take of $623.5 million. Can Mayweather-McGregor leave it in the dust?

To answer the question, we assembled a team of ticket brokers, sports marketers and those who are presently in and used to be in the business of boxing.

Count on the fight selling out, but don’t count on the average ticket price being as high as Mayweather-Pacquiao. Since the event isn’t a title fight, it might qualify as boxing and certainly doesn’t qualify as mixed martial arts. The crowd will be sold on it being a spectacle. Celebrities, who have had virtually no UFC fights to be relevant this entire year, might pay the big bucks, but “spectacles don’t draw as well as a real meaningful event,” said Patrick Ryan of Eventellect, a ticket management firm.

On the flip side, McGregor will draw more of an international crowd from Europe than Pacquiao drew from the Phillippines. We’re saying average ticket sold is $3,600. Add up all the seats and the gate is $70.2 million, missing the Mayweather-Pacquiao gate by $2 million.

What the fight could do in closed circuit viewing is a tougher call, but the sense is that Mayweather’s name in boxing and McGregor’s name in UFC could equal the $6.9 million achieved for Mayweather-Pacquiao, which would be an incredible accomplishment.

The average price charged for Mayweather-Pacquiao Pay-Per-View was $99. On a remarkable 4.6 million buys, that equaled $455 million.

To understand pricing strategy and appeal, we went to Tammy Ross, who worked for HBO for 25 years, last as senior vice president of HBO PPV. “We felt that $100 was a fair price for Mayweather-Pacquiao,” said Ross, who now runs her own sports TV promotion company called Acclaim Sports and Entertainment. “I think it hurts this fight that people were so disappointed afterwards.”

Fans who bought the Pay-Per-View sued Pacquiao and his promoters Top Rank for a lackluster fight that gained some legal traction when, after the fight, it became clear that Pacquiao had a prior injury.

“I think we thought that there wasn’t going to be anything like that fight again, but if there was, it would be this one,” Ross said. “That’s why I think they should put out the $100 price tag again and let Conor’s mouth do the talking.”

Five sponsors paid $13.2 million to sponsor Mayweather-Pacquiao, led by Tecate, which paid a whopping $5.6 million. Expect an alcohol sponsor to have top billing here, and with McGregor don’t count out whisky brands, which are fighting it out for relevance in a growing category in the U.S. Three movies — “Terminator Genisys,” “Mission Impossible: Rogue Nation” and “Southpaw” also sponsored the fight.

Mayweather got an additional $1 million from Hublot and FanDuel to be featured on his shorts and $1 million from Burger King to have the King as part of his walking-in entourage. Pacquiao’s trunk sponsors were worth $2.25 million to him.

“I think sponsorship for Mayweather-McGregor will outsell Mayweather-Pacquiao,” said veteran marketing executive Ben Sturner of Leverage Agency, which has sold sponsorship packages for top fights. “This fight crosses both sectors, boxing and UFC, and I think anyone who wants to be relevant around the time of that fight takes a shot at paying big bucks to be a part of it.”

McGregor’s potential might depend on how much Reebok will let him do with trunks and other brands. Expect Floyd to take the highest bidders to slap on his shorts. Either way, we’re calling Floyd-Conor to top Floyd-Manny in sponsorship by nearly $4 million.

That Mayweather-Pacquiao got to $1 million in merchandise is amazing. It got there because of Floyd’s tremendous merchandising machine, which includes trademarks and trademark filings to over 60 phrases. One of the phrases that he’s sure to put on shirts, hats, and anything that can be printed on will be 50-0, his record if he beats McGregor.

The fight might not have as much cache, but the Floyd business will be even bigger this time around and you can’t count out McGregor combined with the UFC’s marketing engine.

ESPN Chalk reporter David Purdum estimates that $70 million of that was the fight. This fight won’t even do close to that.

Why? For that we go to Wynn sportsbook director John Avello.

“First of all, you’d have to lay a bunch of money on Mayweather to even win a little,” said Avello.

Mayweather opened at a 25-1 favorite.

“Second, bettors would have to be tentative on the crossover for both fighters,” Avello said, especially of McGregor straight up boxing. And lastly, it’s just not for any title. That’s important.”

That’s why Avello says betting on the fight will generate a total handle of less than half Mayweather-Pacquiao.

Adding up all the major money categories, Mayweather-McGregor will give the historical super fight, Mayweather-Pacquiao, a run for its money, but it will fall short.

When all is tallied up, from all the categories, Floyd’s fight against Manny will be worth $17.4 million more overall.