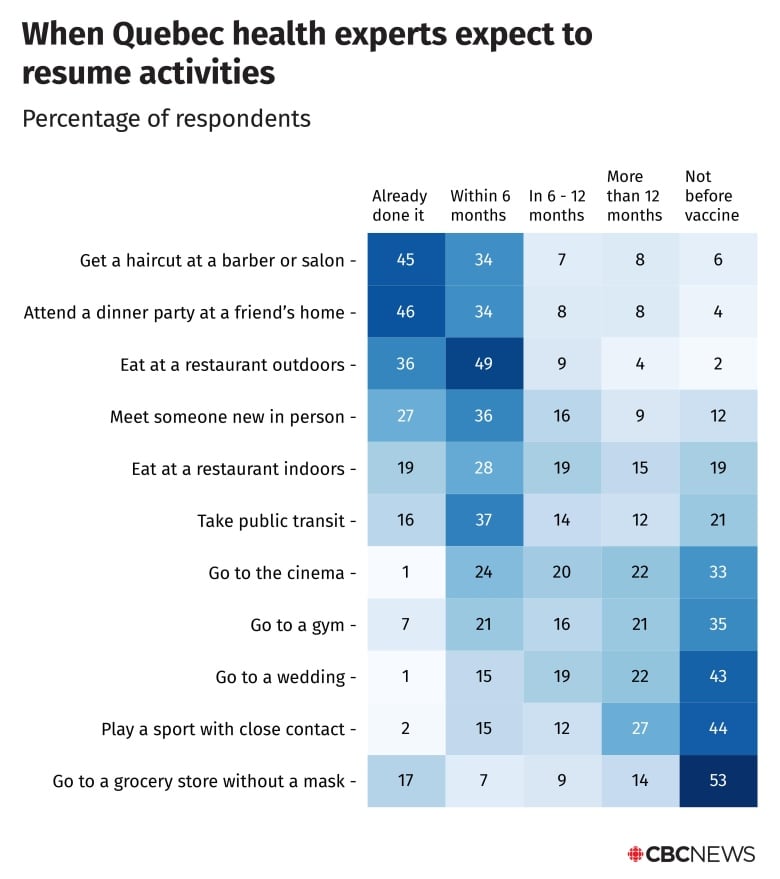 Health experts in Montreal — including ER doctors, epidemiologists and infectious disease specialists — are getting haircuts again and hanging out with friends, but many say it will take a vaccine before they feel safe going to a large wedding or playing a sport like hockey.

CBC Montreal surveyed 170 experts earlier this month from a wide range of health-related domains to find out what activities they feel comfortable doing as the province lifts restrictions on economic and social life.

We also asked them what they thought about the Quebec government’s handling of the COVID-19 outbreak and how the province should prepare for a possible second wave of infections.

Their answers revealed a variety of opinions — reflecting not just the still-evolving science of the coronavirus, but also how risk assessment can be based on personality as much as on the data available.

However, there were several issues around which a consensus emerged. Most of the health-care specialists surveyed don’t plan on joining a big group event, playing a team sport or buying groceries without wearing a mask for the foreseeable future.

But a strong majority have already been to a salon for a haircut, attended a dinner at a friend’s place or eaten outdoors at a restaurant — or plan to within the next six months.

“I actually went to a bar on Saturday, but it was a bar with outside seating where you had to reserve your place in advance,” said Janusz Kaczorowski, a professor and research director in the department of emergency and family medicine at the Université de Montréal.

“Tables were spaced out throughout the parking lot. I have to say, I probably felt as safe there as I would sitting on my terrasse at home.”

Stricter than the government

The vast majority of those surveyed said their personal rules are at least as strict as the guidelines set by the Quebec government — and more than half said their rules are a little stricter or much more strict.

The questionnaire was conducted from July 5 to 12, before Quebec announced its mandatory mask rule, which goes into effect provincewide on Saturday.

Many of those surveyed wanted to see the mask rule brought in sooner. In follow-up interviews, several experts said now that it’s in place, it will ease their concerns about certain activities.

Dr. Eva Suarthana, a medical epidemiologist at the research centre of Montréal Sacré-Cœur Hospital, said she is once again willing to take public transit now that masks are mandatory.

“That is something that should have been done much earlier in the pandemic,” said Suarthana, who began wearing a mask in indoor spaces outside her home in March.

Other specialists said their decisions depend on several other factors.

“For most of your questions, the correct answer is ‘It depends…,'” wrote Jack Siemiatycki, a professor of social and preventive medicine at the Université de Montréal’s school of public health.

“I would not be happy to meet a new person in a small windowless office without knowing anything about them and no meaningful distancing, and that will probably be the case for many months or years.”

The basic hygiene measures we should have been following before the pandemic — including frequent hand-washing — will do a lot to help reduce the risk infection from COVID-19, said Petronela Ancuta, one of Montreal’s leading HIV/AIDS researchers.

“I think we need to find a balance between fear and awareness. Infectious diseases exist. They are not new, but they are serious,” said Ancuta.

She said that the steps we take to avoid getting the flu provide a useful reference point for what is needed to avoid a COVID-19 infection.

On limitations and variations

The CBC Montreal questionnaire was inspired by reporting done by the New York Times about when epidemiologists around the world thought things would return to normal.

It is not meant to be a scientific study. Our sample wasn’t randomized. We contacted 907 health researchers and physicians affiliated with Montreal universities and their teaching hospitals. In all, 170 responded.

You can read more about our methodology below.

Our goal was to produce insights about how health experts familiar with the Montreal context estimate the risks of activities that were once considered routine.

Some respondents noted they found the questionnaire’s wording ambiguous and suggested it would have benefited from a “not applicable” option.

Another limitation of the survey is that it may give the impression that health experts estimate risk based on timelines. But that’s not the case.

“Nobody is counting a certain number of days to be able to do something. They are waiting for evidence that it is safe and appropriate to do so,” Jay Kaufman, a professor of epidemiology at McGill University, said in an email exchange.

“The correct answer to when someone will fly on an airplane, for example, is not three months or six months, it is when transmission on airplanes becomes rare.”

We also asked specialists to rate the current risk of catching COVID-19 in Montreal from 1 to 10, with 10 being the highest risk yet. The answers varied widely, with most responses between 3 and 7.

Dr. Nitika Pant Pai, a researcher and professor of clinical epidemiology at McGill University, assessed the current risk at 7. She said that the resurgence of cases in countries that started to open up is making her extra cautious.

“It is impossible not to consider the fact that you can get COVID from an asymptomatic person. That even if you wear a mask and do social distancing, it’s completely ridiculous to think that you’re not vulnerable,” Pai said.

“I just don’t want to drop my guard. It’s also a personality thing, more than what the data says,” she said.

Others noted their answers were guided by personal experience.

Mireille Schnitzer, an associate professor of biostatistics at the Université de Montréal, is not willing to do many things that have otherwise been sanctioned by public health officials, such as eat inside a restaurant or go to the movies.

Asked why she was reluctant to do so, Schnitzer replied: “It’s easy to understand. I’m seven months pregnant.”

CBC collected 907 emails of health professionals from university and hospital websites and sent them the questionnaire on July 7 and a reminder on July 10. We focused on practitioners and researchers affiliated with university faculties and hospital research centres that are involved in the pandemic, like public health, epidemiology and emergency medicine.

Of the 180 responses, 10 were duplicates. 104 emails bounced back with out-of-office replies or the emails were invalid.

This is the breakdown of professions that responded:

The questionnaire can be viewed here: