How CBC is diving deeper when it comes to newsroom diversity 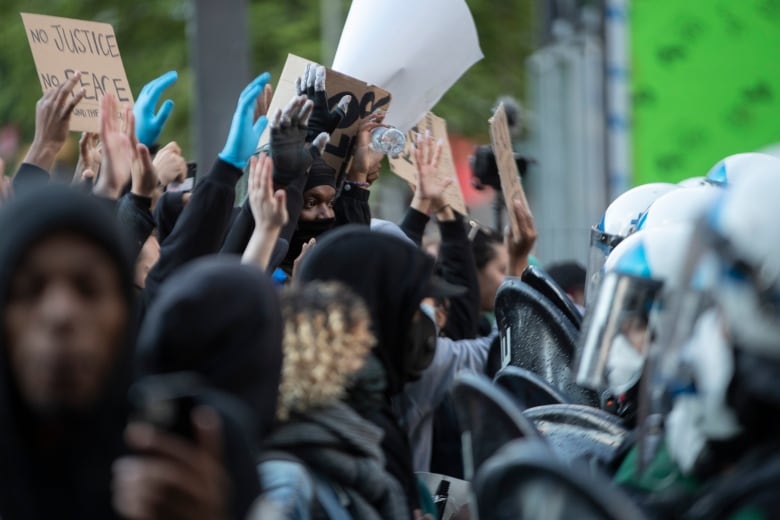 We use this editor’s blog to explain our journalism and what’s happening at CBC News. You can find more blogs here.

Soon after the news broke about the discovery of unmarked graves at the former Kamloops Indian Residential School, we convened a small group of our leaders and Indigenous journalists from across the country to act as an advisory committee for the CBC division of News, Current Affairs and Local.

We knew the story would only grow. There would be more discoveries in many different parts of Canada in the months ahead. We knew there was important accountability and investigative journalism to be done, building on years of excellent work tracking Truth and Reconciliation in Canada. (See Beyond 94, for example.)

We were also aware of the pain and trauma our journalism could create, not only for survivors and their families, but for our own staff with ties to this terrible legacy.

The committee was quick to identify areas in which we could support our staff. We rolled out a special edition of our “Reporting in Indigenous Communities” training course to about 30 leaders and assignment editors involved in deploying people to cover the story. We connected with the Dart Center for Journalism and Trauma at Columbia University to create a training program specific to the residential school story that will help our journalists understand trauma and how to approach people in affected communities, while also managing their own mental well-being.

And we created a dedicated residential school unit to ensure sustained, focused investigative journalism in the months ahead. The unit created an email tip line, wherearethey@cbc.ca, which received more than 200 messages in the first few weeks. It now has a toll-free number: 1-833-824-0800.

That early and proactive impulse to set up a committee and regularly consult with our Indigenous staff as this difficult story emerged resulted in greater sensitivity and understanding — and ultimately better, more nuanced journalism.

It’s a good example of what’s possible when a news organization like ours embraces the call for greater racial representation, equity and inclusion in everything it does, at every level. It’s a step forward on a long journey, with many more steps and undoubtedly years of hard work still to come.

We are 15 months into the cultural and social revolution sparked by the murder of George Floyd. As I’ve written before, this revolution swept news organizations the world over and resulted in some profound self-reflection about how we hire and promote, our core journalistic values and who defines them, and the stories, voices and perspectives we include — or exclude — as we cover the news.

To be clear, we started this important work long before May 2020 in many parts of our organization. We have always had a duty and responsibility to authentically portray this country and, as a result, the root of nearly every inclusion challenge we face are four key questions: Who’s at the table? Who’s speaking? Who’s missing? Who’s deciding?

Here’s a brief update on some of the work happening at CBC News, Current Affairs and Local to keep us on the path forward:

We are participants in the Canadian Newsroom Diversity Survey led by the Canadian Association of Journalists (CAJ). The results, expected this fall, will offer a comparative analysis of the gender and racial makeup of at least 170 news organizations in Canada.

CBC/Radio-Canada is an industry leader when it comes to tracking and reporting on equity and staffing, having done so since the 1980s. As a federally regulated Crown corporation, CBC reports annually on our overall staffing composition per the Employment Equity Act, but many of us want more detail.

Are we reflective of Canada’s demography in the voices you hear, see or read each day? What about behind the scenes? Does management look different from part-time staff? Can we get more detail about specific racial groups as opposed to broad Employment Equity Act definitions such as “visible minority” or terms like “people of colour”?

We saw a great opportunity to get some of these answers in the CAJ initiative.

The measurement is imperfect. For instance, our numbers — a now-outdated snapshot in time as of December 2020 — come from self-declarations on a “cultural census” that we ask staff to complete. Many employees are captured under the broad equity definitions, but they have not completed the cultural census declaration for various reasons, which means we are forced to report many “unknowns” when asked for specific information about ethnocultural identity. Our gender data is binary (CBC is in the process of changing that to include non-binary). Biracial and multiracial staff may self-identify with one or more of the available categories in the survey. How should they be more accurately represented?

Still, the data will offer a baseline and provide some clarity on where we need to focus our recruitment and promotion efforts as a news organization. Here are few of the topline results for CBC’s journalism division, with more detail to come in the CAJ release this fall:

Of senior newsroom leaders in management positions, 22 per cent are people of colour or Indigenous. Here are a few graphs that show breakdowns in more detail:

* Notes on Senior Leadership: As this is a relatively small group of leaders, we addressed inconsistencies in the CBC cultural census data with what we know to be our leadership. We tallied leaders identified under one of the five ethnic categories and grouped everyone else under uncategorized.

We are also months into a review of how our Journalistic Standards and Practices (JSP) — the framework that guides our journalism — are interpreted through the lens of inclusion. A staff-led consultation led to 65 recommendations. We are moving immediately on 20 action items and continuing consultations on the rest. Among the biggest commitments included in that first set of 20:

In addition, more than 25 CBC journalistic programs have been involved in a staff-led content-tracking pilot project that tracks who appears on our airwaves and websites. Each team aims to identify at least three aspects: gender, race/ethnicity and whether or not the subject is speaking about their race or ethnicity. We are also tracking people who have publicly identified themselves as non-binary. Additional customized questions, such as the role of the guest on the program, can be added by the teams participating in this content-tracking project.

The results provide a baseline; a check on our assumptions and intentions around gender and racial equity. We learned, for example, that of nearly 5,000 guests counted across all the participating programs, 60 per cent were male. Hard numbers like that give our teams direction and ensure they course-correct. One consumer program saw that male experts appeared more often than females, for example, and the team made a concerted effort to bring more female guests onto their show.

We learned that 64 per cent of Indigenous guests and story subjects who appeared in our programs during the pilot spoke about their race and ethnicity, compared to 34 per cent of Black guests and story subjects. There is no right or wrong with these figures, considering how prominent the story of the Indigenous experience in Canada has been in recent months of news coverage. But the data forces us to self-reflect and discuss how we should incorporate the perspectives and experiences of these equity-deserving groups in all stories we are doing, beyond just issues related to aspects of their identities.

We aim to make this project a permanent, consistent practice across News, Current Affairs and Local. The staff leading this change have done extensive research and have years of experience in content tracking in Canada. They have already been asked to share their learnings with other newsrooms with similar efforts, including the BBC, NPR and many more.

The goal is clear: We will deepen our journalism and relevance to Canadians by broadening the perspectives at all levels of our organization and in the stories we tell.

Because as Canada’s public broadcaster, with one of the most trusted news services in the country, it is critical we are authentically and truly representing this country and all of its diversity.