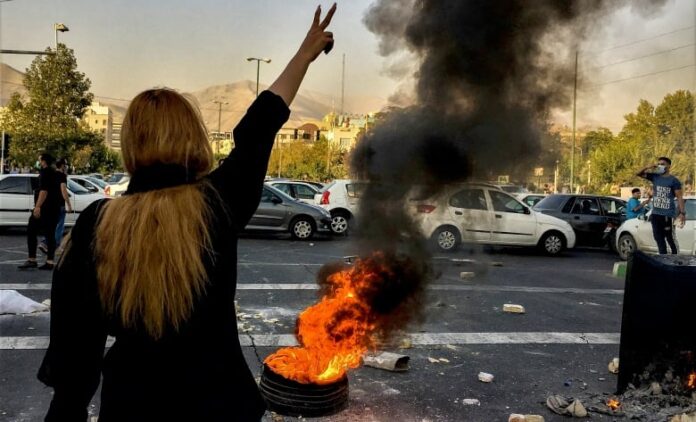 As the Iranian government continues to crack down on its opponents — even executing two protesters in the past week — doctors inside and outside of the country are joining together to document horrific injuries inflicted by the regime.

“The number of people who oppose the regime is very big — perhaps more than 80 per cent or 90 per cent of my colleagues,” said a trauma doctor in Iran who has been treating ghastly injuries inflicted on protesters by the regime’s security forces.

CBC News has agreed not to identify him or reveal any other details about his work, as doing so could compromise his safety.

“I have seen injuries on the legs, hips and face resulting from shotgun pellets,” he said in an interview.

“There have been several cases where they hit them in the forehead — and there was one case in our hospital where a young child was shot in the face and lost both of his eyes.”

The country’s Islamic regime has been shaken by three months of street demonstrations and protests ignited by the Sept. 16 death of Mahsa Amini.

The 22-year-old woman died in custody in Tehran after she was arrested by the country’s morality police for not properly wearing a hijab, which is mandatory under Iran’s Islamic law.

Amini’s death — attributed to police brutality based on leaked medical scans — has triggered widespread street demonstrations and other acts of protest that are ongoing.

Two protesters have been executed by the regime in the past week after widely discredited trials where the young men were denied proper legal representation and executed without the chance of an appeal.

Amnesty International says it identified a further 20 people at risk of execution because of their links to the protests.

“I think it will turn into a revolution,” said the doctor, who believes despite the horrendous consequences of challenging the regime, people will continue to bravely resist.

But for Iranian doctors, treating government opponents injured by security forces is dangerous by itself.

“I treated patients who were injured and shot and needed to have the bullets removed in my clinic — and that caused my office to receive a call from a ‘private’ or ‘unknown’ number — that means it’s a call from the intelligence services,” he told CBC News.

In late October, hundreds of medical professionals who were protesting outside the medical council of Iran were shot in their backs and legs after security services opened fire on them with shotguns.

Getting even basic information out of the country has been difficult, as authorities have attempted to disrupt messaging service platforms such as WhatsApp and Telegram.

Despite that, doctors who have treated patients have still managed to share details of the injuries they’ve been seeing with colleagues outside of the country, including doctors in Canada.

“We try to be their voice,” said Dr. Saeed Zavareh, a Vancouver internal medicine specialist, who tries to stay in contact with colleagues inside Iran.

Zavareh, 53, trained in Iran as a doctor and immigrated to Canada just over 20 years ago.

In the last few months, he said, doctors in Iran have sent him hundreds of scans of patients, many showing ghastly injuries inflicted by the country’s security forces.

“I have seen eye injuries — more than 50 — and that’s only me. In the United States, they have a big database that has around 1,000 cases reported,” Zavareh told CBC News.

During previous uprisings in Iran, such as in 2019, security services killed more than 1,500 people, but this time the tactics are different, Zavareh said.

He believes the aim is to leave people grossly disfigured to dissuade others from taking to the streets.

“Imagine a teenager losing both eyes and walking in your neighbourhood every day — it’s part of the traumatization, part of creating horror for the whole neighbourhood that this is your future if you come to protest.”

Zavareh said that in some cases, he has been able to offer diagnostic or treatment advice based on the photos or body scans of those injured.

On other occasions, he said, Canadian and overseas doctors have been able to send packages through the mail containing supplies, medicine and surgical instruments so that doctors in Iran can set up treatment centres in their own homes rather than work in their clinics.

“They try to make it such a scary place so no one even goes outside — that’s the horror — terrorizing people who don’t want [anything] more than freedom.”

But more often than not, Zavareh said, the most important thing that foreign doctors can do is catalogue the injuries inflicted on regime opponents and collect evidence.

“Every piece of information that comes from Iran is priceless for us. We need more evidence when we want to go ahead and file a case in [an] international court for crimes against humanity,” he said.

The challenges and dangers facing Iranian doctors have been recognized by medical associations across Europe and in North America.

In mid-November, the Canadian Medical Association released a statement calling on Iranian authorities to let doctors do their jobs without interference.

The British Medical Association released a similar statement last week, calling on authorities to “cease persecution of health professionals” who treat those injured by security forces.

“We have had examples of doctors in Iran who have treated protesters and been rushed away to be interrogated themselves and actually punished,” Dr. Raanan Gillon, past-president of the BMA, told CBC News in London.

One of the highest-profile and most worrying cases involves Dr. Hamid Ghareh Hassanlou, an Iranian radiologist who was tortured by police and sentenced to death.

Iranian authorities accuse him of being part of a mob that attacked and killed two members of a government militia, but his colleagues say the alleged confessions are fraudulent and were obtained under duress.

“We are now working to save his life,” said Zavareh, the Vancouver internal medicine specialist, explaining that he has reached out to medical groups around the world and key figures at the United Nations.

“We heard that they are planning to execute him faster than we can [help] him.”

The international networks helping Iranian doctors have grown quickly. In some cases, medical professionals are working through their medical associations or physician colleges, while other associations are more informal.

British dentist Dr. Nader Fallah, who lives just outside London, has been organizing demonstrations and travelling across Europe to pressure governments to impose even harsher international penalties on the Iranian regime.

“The frustration is that we live outside Iran. Initially we felt powerless to help, but in a very quick period of time we have organized multiple associations and groups that hold rallies throughout the world,” Fallah said in an interview near Watford, England, where he was seeing patients.

While Fallah said he accepts that the support the outside medical community can provide to Iranian doctors is limited, he believes by documenting the abuses and acting as a conduit for doctors inside the country, pressure on the Iranian regime can be sustained.

“The more we become the voice of Iran — and with the atrocities against humanity — we find there is more action from European allies [governments] and friends.”

The Iranian regime, however, appears unmoved by the foreign support for the protesters and has brushed aside the widespread condemnation.

“The identification, trial and punishment of the perpetrators of the martyrdom [killing] of security forces will be pursued with determination,” he was quoted as saying by Reuters.

Still, the doctor interviewed by CBC News in Iran said he believes the support from Canada, Britain and beyond is vital and will continue to be going forward.

“The fear to voice your opposition has resulted in this regime remaining in power for too long. I think this fear is dissipating,” he said.

“Every day, the number of people expressing their opposition — and who are brave enough to do so — is increasing.”