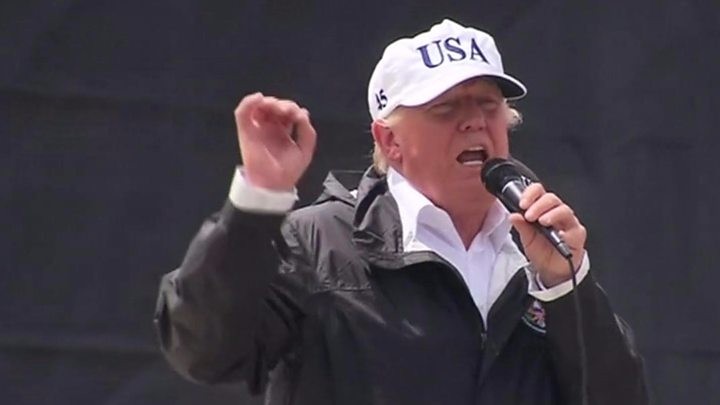 US President Donald Trump is visiting Texas as the state struggles amid record rainfall from a massive storm.

He and First Lady Melania Trump flew to Corpus Christi, where Hurricane Harvey first made landfall on Friday.

Governor Greg Abbott said he wanted the president to understand the enormous challenges that Texans faced.

Unprecedented flooding has driven thousands of people from their homes, particularly in the Houston area where two dams are overflowing.

At least nine people are reported to have died, including six members of the same family whose van was swept away by rising floodwater, and a man in his 60s who apparently drowned while trying to swim to safety.

Rescuers are still trying to reach others that remain stranded after the hurricane, now downgraded to a tropical storm.

In others developments on Tuesday:

Mr Trump attended a briefing on the flooding soon after he landed in Texas but will not be visiting Houston, swathes of which remain under nearly 50in (1.27m) of water.

“The president wants to be very cautious about making sure that any activity doesn’t disrupt any of the recovery efforts that are still ongoing,” White House spokeswoman Sarah Huckabee Sanders said.

Mr Trump said he wanted the relief effort to stand as an example of how to respond to a storm.

“We want to do it better than ever before,” he said.

“This storm, it’s epic what happened. But you know what, it happened in Texas and Texas can handle anything.”

He has already declared a federal state of emergency in both Texas and nearby Louisiana, where Harvey is expected to make landfall again on Wednesday morning. The move releases emergency government funding and other assistance.

Governor Abbott said: “We want him to see and understand the enormous challenges that Texans have faced, and the need for the aid he is providing.”

Engineers have been releasing water from two dams west of Houston to try to stop water spilling into neighbouring communities.

But the water level in the Addicks reservoir – which controls the amount of water in the Buffalo Bayou as it flows into the city – exceeded 108ft (32.9m) on Tuesday, causing it to flow over the top of defences.

Meanwhile, flood gauges on the Barker dam have themselves been put out of action by the deluge.

“This is something we’ve never faced before, so we’re trying our best to wrap around what exactly this water is going to do,” said Jeff Lindner, meteorologist with the Harris County Flood Control District.

The slow-moving storm – currently over the Gulf of Mexico – is expected to continue dumping huge amounts of rain in the coming days over already flood-hit areas.

Residents of the Louisiana city of New Orleans, which marked the 12th anniversary of devastating Hurricane Katrina on Tuesday, are bracing for heavy rain and flash floods over the next two days.