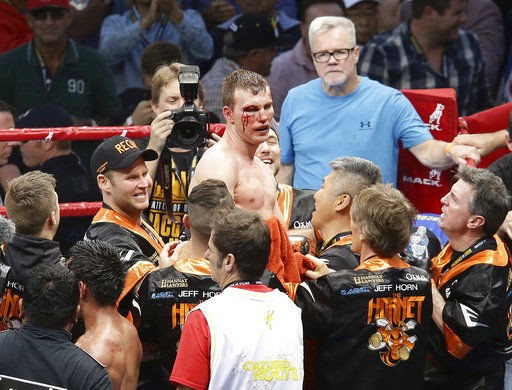 BRISBANE, Australia — Manny Pacquiao had already left town without saying much, even as criticism of the referee in the WBO welterweight world title fight and the judges who awarded a unanimous points decision to a previously unknown Jeff Horn was still pouring in on social media.

The 29-year-old Horn, a former schoolteacher who was given almost no hope of beating the 11-time world champion, was feted by fans and politicians in his hometown on Monday and didn’t care too much about criticism — which started in a TV interview as soon as he left the ring on Sunday after the Battle of Brisbane.

“There will always be a backlash where people say I got lucky, or whatever. There will always be the naysayers saying I didn’t win the fight, but I felt like I won the fight,” Horn, now unbeaten in his 18 fights since turning professional in 2013, said as he basked in the victory on Monday. “Everyone has a right to their opinion. I’m sure I’ve [gained] a lot more fans over there than I’ve lost.”

Pacquiao skipped the formal postfight news conference, his camp saying he needed to get seven stitches in each of the cuts on the top of his head, and also declined other interviews in the dressing room.

Some critics described the result as a robbery and questioned the integrity of the sport.

Immediately after the fight, Pacquiao said he had to respect the decision and noted that he had a clause for a rematch, but he later told a Philippines news channel that he’d been confident he’d won the fight.

His trainers were critical of the referee for not doing more to stop or penalize head clashes and neck holds. And they highlighted statistics that showed Pacquiao threw twice as many punches.

In an interview with ABS-CBN News Channel, Pacquiao thanked some high-profile supporters for letting their feelings be known.

“Thank you for the support and for also believing that I won the fight,” he said in the TV interview. “I’m praying that it will not affect or ruin the boxing industry.”

Reports emerged that a government department in the Philippines wanted the WBO to launch an inquiry into the outcome. The WBO had released the judge’s scores on Sunday night.

All three judges awarded it to Horn, with American Waleska Roldan’s 117-111 score attracting most of the criticism. U.S. judge Chris Flores and Ramon Cerdan of Argentina each scored it much closer at 115-113.

Top Rank promoter Bob Arum said it was a “close fight. It could have gone either way.”

“A couple of close rounds, but you can’t argue with the result,” he said after the fight. “I scored a lot of the early rounds for Jeff. Then I had Manny coming back in the middle. The 12th round, Jeff really won. If you give Manny the 11th, you have it a draw. You give Jeff the 11th, it’s 7-5.”

The 38-year-old Pacquiao had a chance to knock Horn out in the ninth, with the Aussie on the ropes and in big trouble in front of the 51,052 fans at Suncorp Stadium, but couldn’t complete the job. His own handlers agreed that had a bearing on the fight — saying Pacquiao shouldn’t have left it up to the judges.

As he mingled with fans on Monday, his right eye still closed, Horn said he hadn’t paid a lot of attention to the criticism, “but I’ve seen my Facebook and that’s gone gangbusters at the moment.”

“Manny Pacquiao is an absolute warrior, a legend of the sport. He might have come underdone in this fight, I don’t know,” Horn said. “I guess if we have a rematch and he put his all in, he might come in better, I don’t know.”

One thing the fight has done is ensure Horn will have a bigger profile before his next fight, whether that be a rematch with Pacquiao — now 59-7-2 and with three losses in his last eight bouts — or not.

Pacquiao was back in the Philippines later Monday, and had a military guard of honor to welcome him back to General Santos. A unanimous points decision wasn’t what anyone had been expecting.

“It was, I guess, the Manny Show. I can remember watching programs saying the Manny Pacquiao fight in Brisbane — my name wasn’t normally mentioned,” Horn said. “But now hopefully I’m a bit more recognized and I’ve established myself in the boxing community a bit more.”