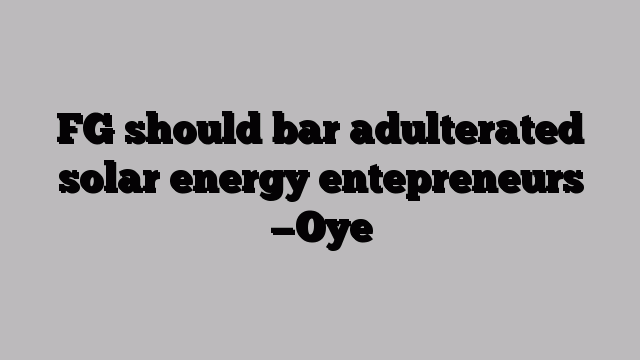 The Senate Committee on Banking, Insurance and Other Financial Institutions has invited the Central Bank of Nigeria, Nigeria Deposit Insurance Corporation and Deposit Money Banks to a meeting on Tuesday over the high interest rates being charged by financial institutions in the country.

The Senate panel has also invited the Manufacturers Association of Nigeria and several other bodies to the meeting based on a motion by the Chairman of the committee, Senator Rafiu Ibrahim.

The President of the Senate, Bukola Saraki, had earlier criticised the charging of high interest rates on loans by Small and Medium-scale Enterprises in the country, a situation he said had forced some firms to close shops.

Saraki had hinted that the Senate would meet with the CBN, the DMBs and other financial institutions on the matter, with a view to bringing down the lending rate.

Ibrahim told our correspondent on the telephone on Sunday night that stakeholders in the financial and manufacturing sectors had been called to the meeting.

“Although the Lagos Chamber of Commerce and Industry is under NACCIMA, we have invited them separately because of the peculiarity of Lagos.”

“We also invited some industry experts to give us their opinions,” he added.

The Senate had last Tuesday said Nigeria’s banking sector was being run by a cartel, a situation which was frustrating the monetary and fiscal policies of the Federal Government, adding that the group of bank owners had become strong that it was manipulating the economy.

The upper chamber of the National Assembly also condemned the high interest rates being charged by the DMBs on the SMEs. The legislature stated that Nigeria’s economy could not survive when it was difficult to run businesses.

The lawmakers had unanimously resolved to mandate the committee to organise a roundtable with the CBN, DMBs, Nigeria Deposit Insurance Corporation as well as other relevant stakeholders and industry experts.

The roundtable is expected to find “immediate, sustainable and lasting solutions that will help usher in a new interest rate regime that supports enterprise development in Nigeria.”

In an interview with journalists in Ilorin, the Kwara State capital, on June 4, Saraki had stated that in an economy where workers were being retrenched and people were losing investments, it was immoral for certain sectors to be making astronomical profits.

He said, “They (banks) will tell you that they are doing business but in doing business, there must be social responsibility. We must be able to sit down and look at ourselves eyeball to eyeball, and we intend to do that; and I can promise Nigerians that we can find a solution. Hopefully with the stability in the forex market, we will now begin to address the high interest rate.

“There is no business that can make money if it is trying to borrow at 28 or 29 per cent. It cannot work and if we cannot get the banks to lend to the real sector and they carry on their money to government instruments, there cannot be growth. So, we must tackle that. I can assure you that I will lead that challenge. We must sit down and discuss it.”

Saraki added, “They are in business to make money but we must look at what money is reasonable in this kind of environment. You may have to reduce that profitability to allow your country to grow. It is that balancing that we need, but in doing that, there must be some incentives. We may have to tell them, ‘Listen, we may have to limit how much you put in government security’.

“What do you do with that extra amount of money? It must go to the real sector. It must go to the business that produce made-in-Nigeria products. They may say that it is too risky to do that. In doing that, we must give them some assistance. This is the kind of negotiation we must make.”

Economic and financial experts had said it would be difficult for the nation to record significant growth unless the CBN took steps to bring down the interest rate.

Consequently, they called on the CBN’s Monetary Policy Committee to reduce the benchmark interest rate during its next bi-monthly meeting.

This, they said, would make the banks to reduce their interest rates on loans.

The issue of Monetary Policy Rate, which some experts believe will help commercial banks charge lower interest rate, had made the CBN to clash with the Minister of Finance, Mrs. Kemi Adeosun, some months back.

Adeosun had asked the CBN to reduce the MPR, currently at 14 per cent, to enable commercial banks charge lower interest rates.

But the CBN Governor, Godwin Emefiele, had said the apex bank decided not to reduce the MPR in order to maintain its primary objective of price stability.

The CBN governor said the MPC was of the view that in the past when the rates were reduced to achieve these objectives, it was later discovered that rather than deploy the available liquidity to provide credit to agriculture and manufacturing sectors, it provided opportunities for lending to traders who deployed the same liquidity in putting pressure on the foreign exchange market.