‘Help Me’: Mike Lee Begs Mitt Romney For An Endorsement 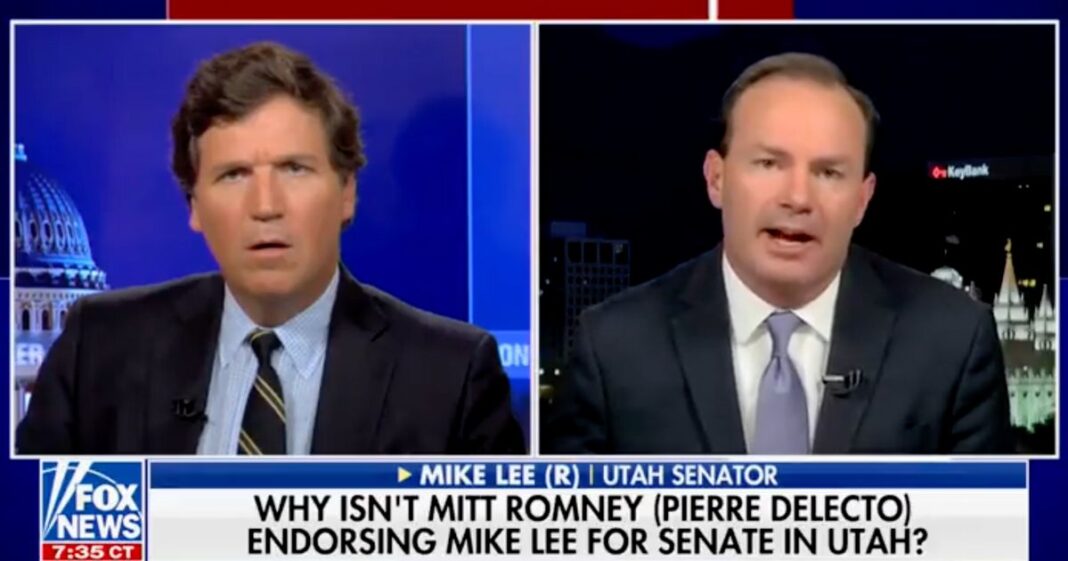 “Please get on board, help me win reelection. Help us do that. You can get your entire family to donate to me,” Lee said of his colleague on “Tucker Carlson Tonight,” which Romney probably doesn’t watch.

“I don’t think Mitt Romney wants Chuck Schumer to continue to be the Majority Leader. If I’m right on that, then get on board. Because that’s exactly what this will lead to,” the senator warned.

Romney is the only GOP senator who hasn’t endorsed Lee’s bid for another term. Earlier this year, the junior senator from Utah said he intended to remain neutral in the race because he considers both Lee and McMullin friends.

“I don’t think endorsements make any difference in a race to speak of. People in the race are my friends. I usually try and avoid situations where they’ve been friends. I may endorse and I may not, but I really haven’t given it any thought at this point,” he said in March, according to The Deseret News.

The two Utah Republicans have taken different paths during their time in the Senate. Although they both hold conservative views on issues, Romney became an outspoken critic of Donald Trump and his efforts to overturn the 2020 presidential election. Lee, a Tea Party darling who was once a critic of Trump, took the opposite tack. He strongly embraced the former president, a position that may now be costing him some voters in Utah.

The Utah Senate race isn’t considered competitive but a recent Deseret News-Hinckley Institute of Politics poll found McMullin within striking distance, lagging behind Lee by 4 percentage points. A significant 12% of voters said they were undecided.

In his interview on Carlson’s program on Wednesday, Lee called his opponent a “closeted Democrat” who has raised millions of dollars from Democratic donors and who has been endorsed by the Utah Democratic Party. The senator didn’t mention that he once voted for McMullin in the 2016 GOP presidential primary in protest of Trump.

McMullin, a former CIA officer and House GOP staffer, recently picked up the endorsement of retiring Republican congressman Adam Kinzinger (R-Ill.), who is helping lead the Jan. 6 inquiry. The independent Senate candidate has made Lee’s support for Trump a big focus of his campaign, calling the senator a “sycophant” for the former president.