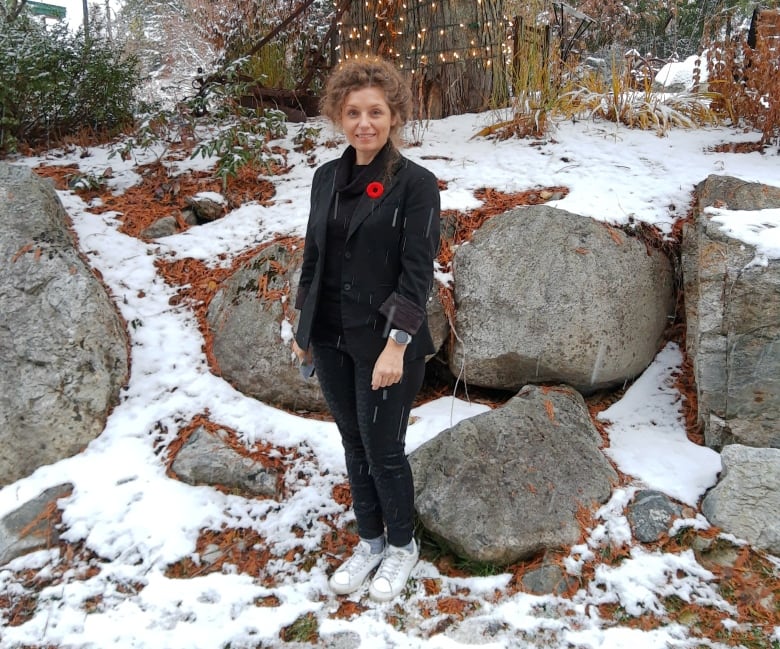 This First Person column is written by Anna du Plessis who lives in Calgary. For more information about CBC’s First Person stories, please see the FAQ.

My mom and my brother eyed my chubby ceramic piggy bank. I met their gaze and nodded my head. Even at roughly six years old, I had a strong sense of duty toward my family. It had to be done. I got to do the honours — SMASH!

My little piggy was in a million pieces.

This sounds like a sad story — like we hit rock bottom. But it wasn’t sad for me. I felt hope, the possibility of freedom.

That smiling piggy I haggled for at a flea market taught me that I had agency, that I could change my circumstances. It was where my adventure of independence, optimism and courage began.

I grew up poor in an abusive, alcoholic household and fought my way from dingy bars in South Africa into boardrooms here in Canada.

The kind of poor I endured is not the kind of poverty you might see on the international news from a war-torn village plagued with disease and starvation but rather a self-inflicted scarcity. The mismanagement of money fuelled my dad’s addiction and keeping up appearances had dire consequences.

My parents were teachers with modest salaries. But all our money went to my dad’s booze buddies — drinks were always on him or lending someone this and then owing someone that. As a child, I spent many hours in the bar with him. But when the drinking stopped, that’s when the shouting and fighting began. His anger was aimed at my mom.

My mom tried her best. She loved us and kept us fed. She took on my dad’s debt, hid his drinking problem from everyone else and worked extra jobs.

I did not want to be a martyr like my mom.

The first time I saw that piggy bank at the market, it was sitting on a table amidst all kinds of other second-hand goods from kitchenware to ornaments. I was only about four years old, but somehow I had the thought that it was going to make things better and that’s why I had to have it.

Then for two years, I saved — everything from my birthday money from my granny to fishing out leftover coins in slot machines at the bar to money I was supposed to put in the collection plate at church. In my child’s mind, I figured Jesus knew we were poor, too.

We smashed the piggy bank in the middle of winter, when our electricity had just been cut off again and the pantry shelves didn’t have a single cracker or soup can left. My mom didn’t tell me to do, it but I volunteered.

I remember wrapping the piggy in a rag and smashing it on the kitchen table. I don’t remember my mom’s face, but I was proud. It had South African rand roughly the equivalent of $200 CAD today — enough to put gas in the car and buy groceries, plus some candles for light.

It changed my life, because it changed my outlook. I suddenly believed my situation was temporary, that I was able to face any challenge and I could make my life better.

But life was still hard. At 14, I survived being hit by a car while walking outside our house. My dad was the driver and he was drunk. I had a concussion, but somehow I got up, walked into the house and passed out again. When I showed up bruised at school the following Monday, I told everyone exactly what happened and spoke my truth without shying away from it.

I was teased about it. I didn’t care. This was temporary.

In my final school year, this courage also helped me convince my mom to move out. I couldn’t protect her from my father’s rage when I wasn’t there. And then I found the courage to move even further away.

My partner and I had a long-term goal of moving to Canada — a country that’s much safer and where we would have the freedom to live without judgment. So in spring 2020, we packed up everything we could and sold the rest.

Two weeks after we got to Calgary, the whole world went into lockdown. I eventually found the job I wanted, but lost it a month later when the company went bankrupt. Another dream smashed temporarily.

But I could rebuild. I’ve learned that. I work in the competitive industry of retail. Applying the skills of frugality and persistence that my piggy taught me, I worked my way up to be a senior merchant.

Despite economic setbacks during the pandemic, I am proud to say that I now work for my dream employer doing what I love. I pitch clothing and other product lines in executive boardrooms and it feels so far removed from those dingy bars and the home I grew up in. Still, I’m grateful now for the childhood I had and especially for that piggy bank. It helped shape me into the person I am today.

I am a fighter. I am scrappy, and I look forward to whatever is next.

As part of our ongoing partnership with the Calgary Public Library, CBC Calgary is running in-person writing workshops to support community members telling their own stories.

Read more from this workshop on the theme Shifting Work:

To find out more, suggest a topic or volunteer a community organization to help host, email CBC producer Elise Stolte or visit cbc.ca/tellingyourstory.