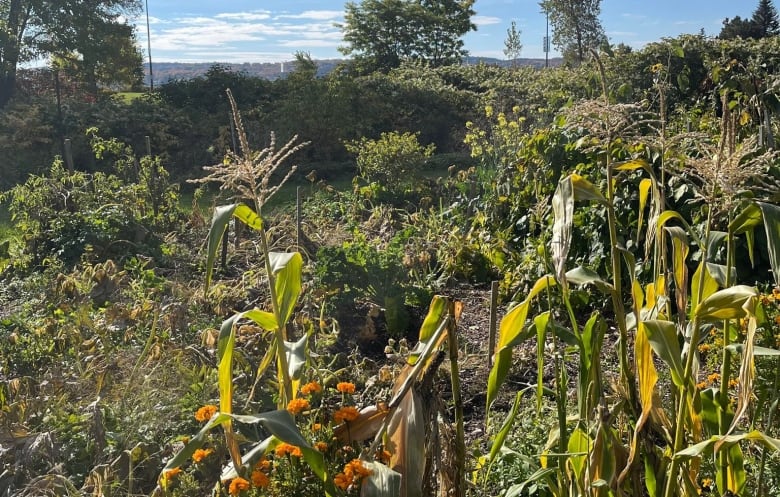 Denis Gilbert started gardening on the vacant green space in front of his Quebec City home 50 years ago.

“I’ve grown the most beautiful tomatoes of my life here,” he said.

It wasn’t long before neighbours started to join him, creating a community garden that lasted five decades.

“The most beautiful memory I have here is the community that we managed to form with the garden,” Gilbert said.

These days, more than 20 residents are cultivating the land that has become known as the Jardin du Chemin du Foulon.

But now those five decades are coming to a halt as a recent soil study found the land to be contaminated and unsafe, prompting the city to shutdown the unauthorized community garden.

“According to the Ministry of Health, the consumption of vegetables grown on this lot could be harmful to health if they are not washed well,” said Quebec City spokesperson Karine Desbiens in an email to CBC News.

Up until this year, the city has tolerated the garden even though it was never given the official OK to operate in the green space. After it was discovered the soil was unsafe to cultivate, the city gave plenty of warning, Desbiens said.

“Since the summer of 2021, several warnings have been issued to gardeners to inform them of the upcoming dismantling of the garden,” she said.

That time to remove the garden has come, said Desbiens, but gardeners have other options as the city now has enough municipal garden space to accommodate nearly 560 people.

Those authorized and city-supported municipal gardens are on properties that are carefully selected based on criteria that include services and accessibility, she explained.

The land that Gilbert and his neighbours have been gardening on is actually owned by Canadian National Railway. Mathieu Gaudreault, spokesperson for the company, said what happens on the land is up to the city as the city leases the property. He directed all questions to the city.

But, contaminated or not, neighbours don’t want to walk away from their beloved, homegrown community garden.

Among them is Lucie Rouillard who has been gardening there for about 10 years. She started a petition that has collected more than 200 signatures demanding the community garden be preserved.

“It was very difficult news to hear recently and we hope that we may still find a solution,” said Rouillard.

She said neighbours are also demanding more information to better understand why the city is closing the garden because it hasn’t been clear.

“We understand the city, at large, supports these gardens,” she said. “It’s just that we feel something wasn’t done correctly here.”

Marie Lafond says she moved to the area about 13 years ago and the first people to welcome her to the neighbourhood were the gardeners.

She described the garden as a beautiful addition to the area, with an abundance of fresh vegetables harvested every year. Often those vegetables are distributed to residents, including Lafond, who doesn’t actually garden on the land herself, she said.

Now she is supporting her neighbours in the fight to keep the garden right where it is, even if the city says it’s closing this week.

“If there is a problem, I am sure it can be fixed,” she said, questioning the lack of information coming out of the city on the issue.

She said the city’s argument that the soil is contaminated doesn’t make sense. It’s clearly not a safety issue as people have been eating vegetables from the garden for 50 years, she said, and the activity there has never conflicted with the rail line or residents.

“There’s something here that’s not clear,” she said. “Who is behind this? That’s the question to ask.”