‘He is coming to his rescue’: Older brother donates stem cells to 7-year-old with rare blood disease 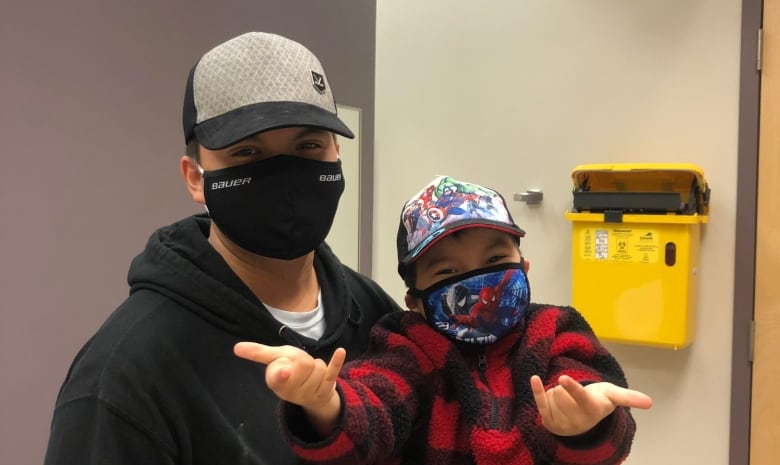 The mother of a boy with a rare blood disorder who has been searching for a stem cell donor for the last four years says a partial match has been found — her older son.

Tanner McLeod was just six months old when he was diagnosed with sideroblastic anemia.

He’s unable to produce healthy red blood cells and must have a blood transfusion every three weeks when his hemoglobin levels drop too low.

Now, thanks to scientific progress and a partial match, Tanner’s brother Teemu, 17, is providing the seven-year-old with a stem cell donation.

The transplant took place on Tuesday evening in Winnipeg.

“It’s really unreal, unbelievable to have someone in my own house to provide a new beginning, a new life for Tanner,” said Miranda McLeod, Tanner and Teemu’s mother.

For the last few years, Miranda has made it her mission to find a possible stem cell match.

Miranda is from Pimicikamak, also known as Cross Lake, so Tanner was more likely to find a match within the First Nations population. But donors are hard to come by.

She founded a grassroots organization — Natamakewin, which means to rescue, to save, or to help someone in Cree — to both search for a match and, more broadly, to encourage people to join the stem cell registry through Canadian Blood Services.

She couldn’t find anyone who matched her son, though.

Teemu is just a 50 per cent match, but Tanner’s doctors said medical advancements make the transplant possible even without a perfect match.

“Tanner understands that his new blood cells are coming from his brother. He is very excited and he is just so proud that his brother is willing to help him to have a healthier life,” Miranda said.

She adds that Teemu is embodying the spirit of Natamakewin.

“I feel like this is what my son is receiving from his brother. He is coming to his rescue.”

She says the disorder affects Tanner’s appetite, energy levels and he turns pale when it’s time for new blood.

She hopes the transplant will work and he’ll be able to live a normal life.

“He loves playing sports. He Rollerblades around the house pretending to be a hockey player. He loves baseball. I hope this transplant will help him fulfil his dreams, doing what kids love to do is play without having to feel like you’re feeling sick or just have no energy,” Miranda said.

But the transplant was the easy part, she says.

After that, “Tanner will wait for the new cells to settle in his body and start developing on his own. This is the part that worries me, that scares me,” she said.

Not everyone who needs a transplant will be as lucky as Tanner, she says, and “have that fortunate experience for a second chance at a healthy life.”

In November, another Manitoba family of a child with a rare immune disease was also calling for ethnically diverse stem cells.

Boston De Castro has hemophagocytic lymphohistiocytosis, which leads his immune system to attack itself, causing his liver and spleen to enlarge. The only cure is a stem cell transplant.

For De Castro, the best chance of a matching donor was finding someone of mixed ethnicity like him — half-Caucasian and half-Filipino, his mother Simone Janetta said.

In November, the family urged people — especially those of mixed ethnicity — to register. A total of 3,000 people signed up in Boston’s name, but unfortunately no match was found.

Instead, Janetta ended up donating her stem cells, as she was a half match.