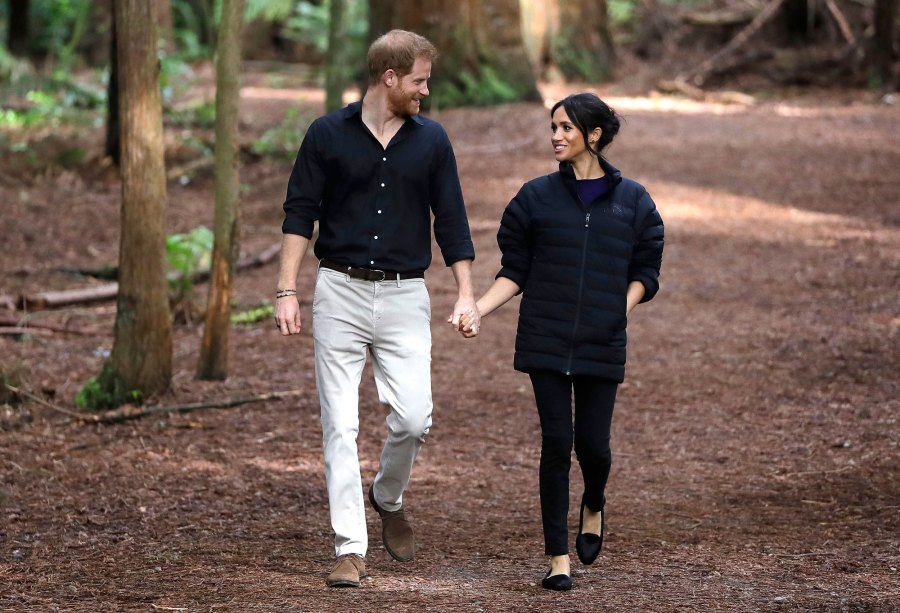 Harry and Meghan Hired Former ‘Tig’ Designer for Royal Website, New year, new look! Prince Harry and Duchess Meghan turned to a familiar face to design their website, which details their “step back” plan that was announced on Wednesday, January 8.

Prince Harry and Duchess Meghan Take a Step Back From Senior Duties: Everything We Know

In coordination with the Duke and Duchess of Sussex’s statement that describes their new approach to their royal duties in 2020 — including splitting time between the U.K. and North America — the couple launched a fresh site to focus all their efforts and future endeavors.

“Very few people were involved in the process, but those who were managed to keep information of the site confidential,” a source told Harper’s Bazaar on Thursday, January 9.

Prince Harry and Meghan Duchess of Sussex walk through a Redwoods forest on October 31, 2018 in Rotorua, New Zealand. Kirsty Wigglesworth/AP/Shutterstock

SussexRoyal.com is the official website of the couple and, according to the publication, it was written by someone that the couple knows and designed by Made by Article. This is the same Toronto-based company that created the Suits alum’s former lifestyle blog, The Tig.

Harry, 35, and Meghan, 38, have seen success on their latest online venture, which was “created as a source of factual information regarding The Duke and Duchess of Sussex,” according to the website. It is focused on keeping visitors up to date on “key information” in regard to their commitments to the “Community, The Monarchy, and the Commonwealth.”

The outlet reported that, as of Thursday, the new site had received “millions of visits” and the pair have been overwhelmed with “supportive messages from charities” and other organizations they’ve worked with in the past.

It launched on the same day that the news of their revised plans for their roles within the royal family shook up the monarchy.

“We have chosen to make a transition this year in starting to carve out a progressive new role within this institution,” the couple announced in a statement published via Instagram on Wednesday. “We intend to step back as ‘senior’ members of the Royal Family and work to become financially independent, while continuing to fully support Her Majesty The Queen. It is with your encouragement, particularly over the last few years, that we feel prepared to make this adjustment.”

The statement continued by sharing the pair’s plans to “balance our time” between their respective home countries, while still “continuing to honour our duty to The Queen, the Commonwealth, and our patronages.”

“After many months of reflection and internal discussions, we have chosen to make a transition this year in starting to carve out a progressive new role within this institution. We intend to step back as ‘senior’ members of the Royal Family and work to become financially independent, while continuing to fully support Her Majesty The Queen. It is with your encouragement, particularly over the last few years, that we feel prepared to make this adjustment. We now plan to balance our time between the United Kingdom and North America, continuing to honour our duty to The Queen, the Commonwealth, and our patronages. This geographic balance will enable us to raise our son with an appreciation for the royal tradition into which he was born, while also providing our family with the space to focus on the next chapter, including the launch of our new charitable entity. We look forward to sharing the full details of this exciting next step in due course, as we continue to collaborate with Her Majesty The Queen, The Prince of Wales, The Duke of Cambridge and all relevant parties. Until then, please accept our deepest thanks for your continued support.” – The Duke and Duchess of Sussex For more information, please visit sussexroyal.com (link in bio) Image © PA

The aftermath that has followed included a statement from Buckingham Palace, headed by Queen Elizabeth II, that noted they were still in “early stages” of discussions with the Sussex family.

A source told Us Weekly exclusively on Thursday that “Harry and Meghan made their statement without the official blessing of the queen. It’s not that they didn’t care — it was a miscommunication.”

“There’s still a rift between the two brothers,” an insider dished on Wednesday. “It’s sad because when they were younger, William would be the first person Harry would go to with big news like this.”

The source added: “William is incredibly hurt, but at the same time he has his own family to focus on and is trying to move forward with his life.”

Despite the backlash they’ve received, Harry and Meghan have stuck to their guns and continued forward with their plans.

“They’re feeling confident,” a friend of the couple told Harper’s Bazaar on Thursday. “Harry and Meghan are aware that they’ll be criticized, perhaps even vilified, for taking control of their lives. But creating a positive future for themselves and their family has always been their priority.”