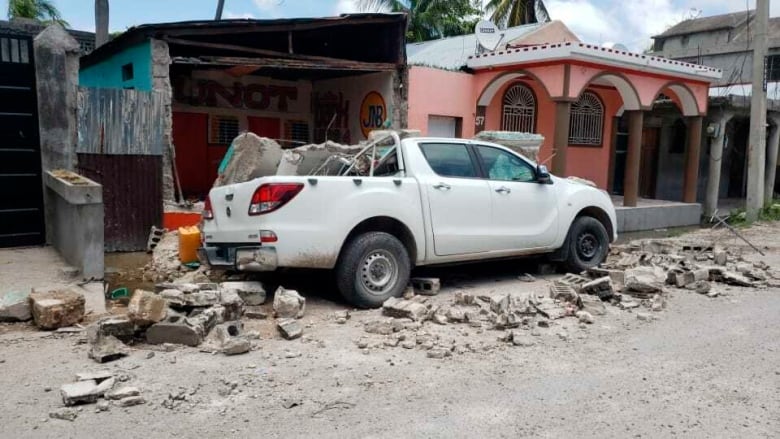 Montreal’s Haitian community is holding its breath as Haiti grapples with a major earthquake that authorities in the country said killed hundreds of people and left hundreds more injured and missing.

The 7.2-magnitude earthquake struck Saturday morning in southwestern Haiti, eight kilometres from the town of Petit-Trou-de-Nippes.

The town is located about 150 kilometres from Port-au-Prince, the country’s capital, which has yet to recover from the devastating quake in 2010 that killed an estimated 250,000 people.

Marjorie Villefranche, a prominent member of Montreal’s Haitian community, said it’s been a scramble for many to try to reach loved ones back home.

“It’s obvious that we’re like, ‘not again,'” said Villefranche, who runs La Maison d’Haïti, a non-profit resource centre for the city’s Haitian community.

“For the community in Quebec, we’re experiencing this with a huge feeling of helplessness. We are far from our loved ones, we are far from the country, we’re trying to understand what’s going on.”

Villefranche and other community leaders — including Frantz Benjamin, a Liberal member of Quebec’s National Assembly who represents the Montreal riding of Viau — formed a crisis unit on Saturday in an attempt to come up with a plan to help those in Haiti and the Haitian community in Quebec.

At a press briefing held at the Viau constituency office Saturday evening, Villefranche said the crisis unit is asking Quebecers looking to help out to direct their financial aid toward the Canadian Red Cross in Quebec, Doctors of the World and Doctors Without Borders.

“In our opinion, these are the three organizations that are the most capable of intervening in times of emergency,” Villefranche said, adding that other directives will be communicated when it comes time to help with reconstruction.

An emergency phone line will also be implemented for Quebecers who have questions about how to help out or who need assistance finding resources to get emotional and psychological support.

“I hope there will be organized help that will come quickly to the people,” Villefranche said. “We hope, too, that the aftershock will not be as terrible as it was for Port-au-Prince” in 2010.

Haiti is embroiled in humanitarian and political crises a little more than a month after President Jovenel Moïse was assassinated in his own home.

Frantz Voltaire, a Montreal-based documentary filmmaker, knows the southwestern region of Haiti well. His family comes from there, although most family members have since moved to other regions.

Voltaire said he is concerned that the region is “a very isolated place,” with limited ways to access it. He said that could make it more difficult to get help to those in need.

“There is only one main road to access the main cities,” he said.

Montreal Mayor Valérie Plante expressed her solidarity with the people of Haiti. “Montreal will participate financially in the international [aid] efforts,” she posted on Twitter.

“My thoughts are with the Haitian people that has to once again experience such a tragedy,” Legault tweeted. “All of Quebec is with you.”