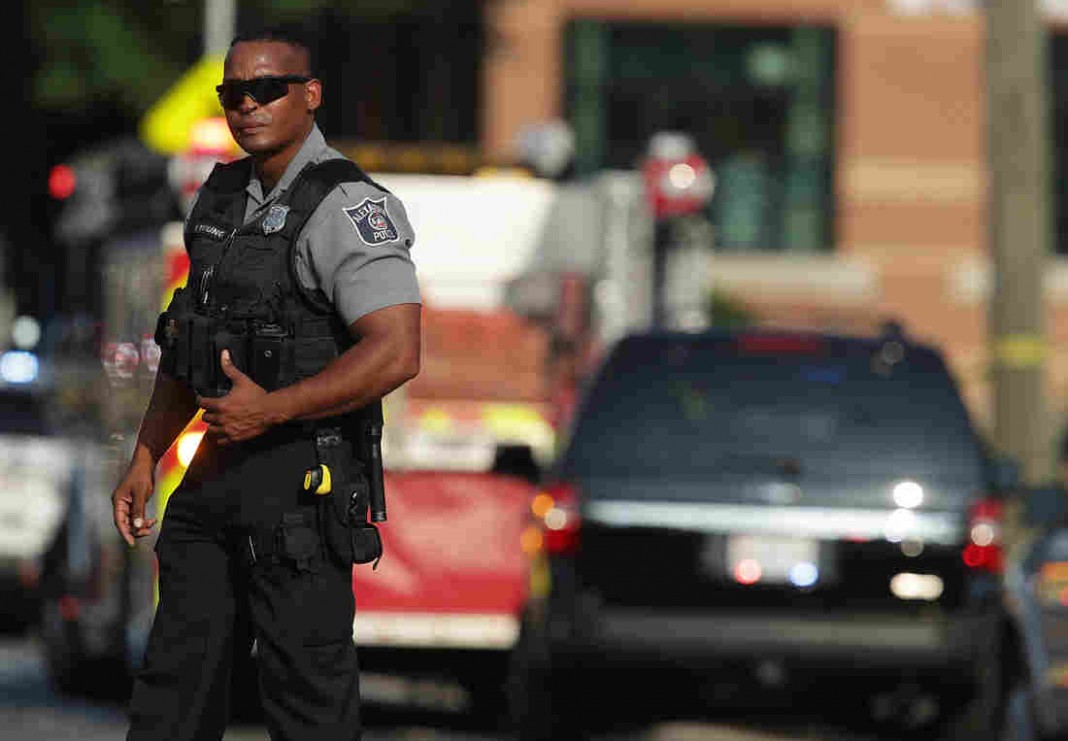 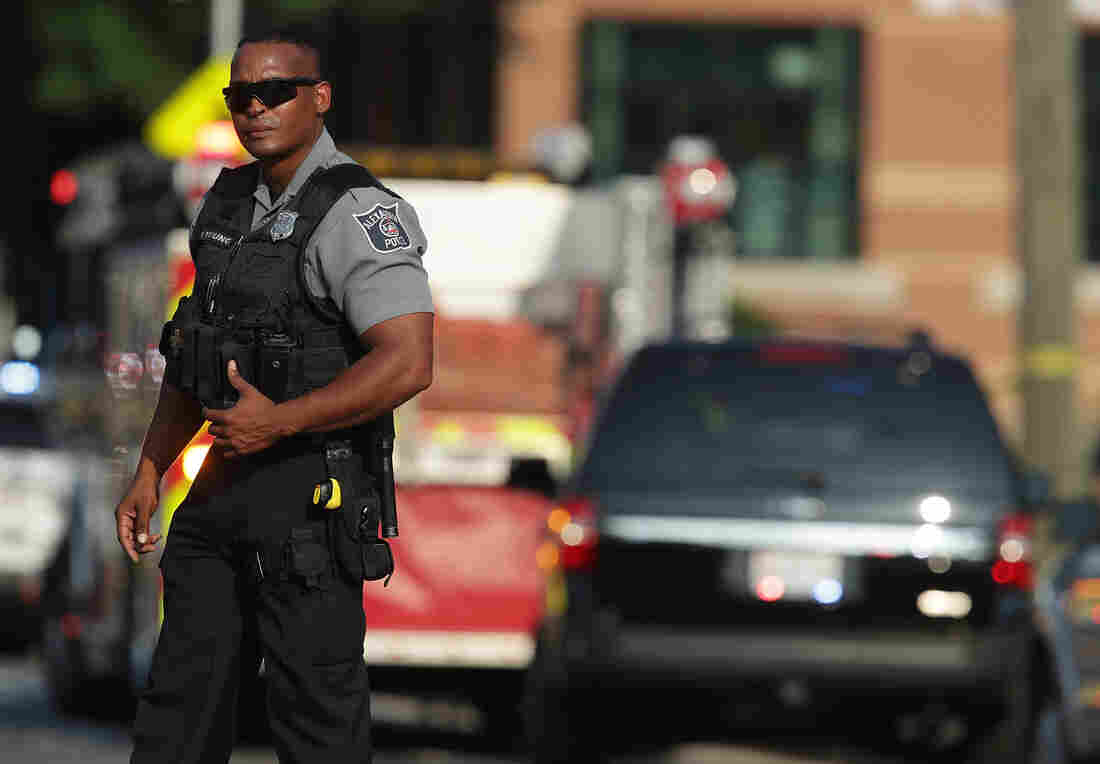 A police officer stands guard near the scene of a shooting Wednesday morning during a Republican congressional baseball practice in Alexandria, Va., just south of Washington, D.C.

A gunman opened fire during an early morning baseball practice for Republican members of Congress on Wednesday, reportedly firing dozens of shots at a field in Alexandria, Va. At least five people were wounded, including Majority Whip Steve Scalise of Louisiana.

“Suspect is in custody and not a threat,” the Alexandria Police Department tweeted. Police Chief Michael Brown says five people were transported to the hospital, including the suspect.

The shooting occurred around 7 a.m. ET in the Del Ray area of Alexandria, just south of Washington, D.C., and about 8 miles from Capitol Hill. Afterward, a helicopter arrived to medevac at least one victim. Most details about the victims’ status are not yet known.

“Rep. Steve Scalise of Louisiana, a true friend and patriot, was badly injured but will fully recover,” President Trump said in a tweet. “Our thoughts and prayers are with him.”

Rep. Steve Scalise of Louisiana, a true friend and patriot, was badly injured but will fully recover. Our thoughts and prayers are with him.

The shooter opened fire at a baseball field at Eugene Simpson Stadium Park, across the parking lot from Alexandria’s YMCA. Gunshots hit the YMCA’s windows, and the building was shut down and the block cordoned off, NPR’s Tom Bowman reports from the scene.

After receiving a call of shots fired at 7:09 a.m., officers were on the scene within three minutes, Chief Brown said. He added that at least two officers fired at the gunman.

Of the at least five people who were wounded, Rep. Mo Brooks of Alabama told CNN that they include a congressional staff member, two law enforcement officers and another officer who was either with the Capitol Police or Secret Service.

Brooks said he saw the gunman holding a semi-automatic rifle in the area behind third base, and that Scalise had been near second base. He told CNN that he tried to help Scalise, saying, “We used my belt to help put a tourniquet around his leg.”

I was present at this mornings GOP baseball practice, but am alright. Prayers for Congressman Scalise & aides that were involved.

NPR’s Scott Detrow reports that a staff member of Rep. Roger Williams’ office was shot and wounded. Earlier reports had claimed Williams, of Texas, was also shot; his office says the congressman was not hurt in the attack.

A local resident who posted a video of the scene after the shooting said, “There were probably about 80 to 100 shots fired over there.”

That resident, Benjamin Childers, added, “We had three members of Congress [who] took shelter in our apartment.”

President Trump has issued a statement:

“The Vice President and I are aware of the shooting incident in Virginia and are monitoring developments closely. We are deeply saddened by this tragedy. Our thoughts and prayers are with the members of Congress, their staffs, Capitol Police, first responders, and all others affected.”

The shooting occurred one day before the annual Congressional Baseball Game, which is scheduled for June 15 at Nationals Park. Pitting members of one party against another, the contest supports charities ranging from the Boys and Girls Clubs to the Washington Literacy Center.

Members of the Democratic Party’s team were practicing elsewhere Wednesday morning; after the attack, they tweeted a photo of themselves taking a moment to think of their colleagues.

The violence disrupted what had been a quiet start to the day in Del Ray, hitting an area where many residents go to work out in the mornings and grab a coffee from a shop around the corner from the YMCA.

As NPR’s Jessica Taylor reports from the neighborhood: “This is people going about their normal mornings, probably not even knowing that there were members of Congress that were practicing a few blocks down the road here. And it just went from really sort of a calm, peaceful morning to utter chaos in here.”