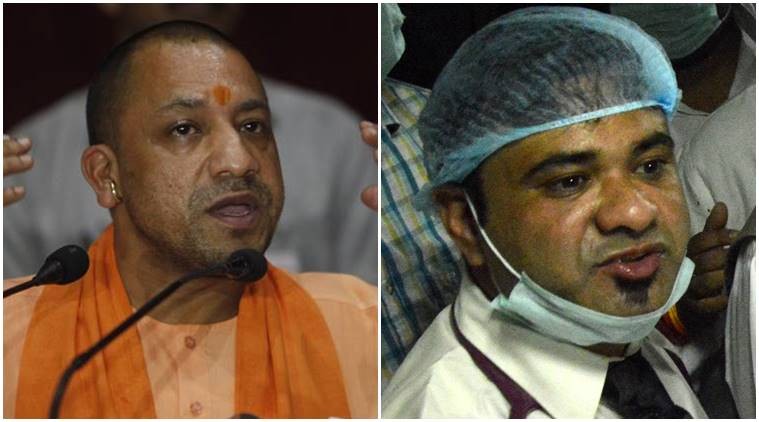 VISITING the BRD Medical College in Gorakhpur three days after 23 children died in its paediatric ward, Uttar Pradesh Chief Minister Yogi Adityanath said the truth should come out, whether the hospital was doing “upchar (treatment)” or “narsanhar (massacre)”.

“The guilty will not be spared and such strict action would be taken by the Uttar Pradesh government that it would set an example for people to work with discipline,” said Adityanath, adding that as the representative of Gorakhpur, no one could feel the pain of children of eastern Uttar Pradesh more than him as he had seen them die before his eyes.

Hours later, Dr Kafeel Khan, superintendent and also in-charge of the ward where the deaths took place, was removed. The administration cited “negligence of duty” as the reason.

Union Health Minister J P Nadda, who accompanied Adityanath to the hospital, said Prime Minister Narendra Modi was reviewing the situation in Gorakhpur on a regular basis and had expressed his concern.

Nadda announced that a Regional Medical Research Centre would be set up in Gorakhpur, at a cost of Rs 85 crore, to study all the causes of infection among children in Eastern Uttar Pradesh. It would assist the state government in preparing better protocols for treatment, he said.

Claiming that he had not been informed about the delay in payment of oxygen by the hospital, Adityanath said, “This is my fourth visit to BRD after becoming the Chief Minister. Whenever I have come here, I have inspected the encephalitis ward and have asked about the facilities needed to strengthen the services. I had visited on July 9 and then on August 9, I had visited all the senior officers, including commissioners of two divisions and CMOs of all the seven affected districts… I had repeatedly asked if there was any problem related to AES (Acute Encephalitis Syndrome), then inform me. I have been fighting for its cause since 1997. I am surprised that all of them told me they would find a solution to the problem.”

He said that when he last visited BRD Medical College, its principal and the Head of Department were part of his meetings.

On the direction of the PM, Nadda said, a high-level team of experts from the Government of India, including Dr Satish Challani, Head of the Paediatric Department at Safdarjang Hospital, Delhi; Dr Sushma Nangaia, Head of the Neo-natal Unit at Lady Hardinge Medical College, Delhi; and Dr M K Agarwal, Deputy Commissioner Immunisation, Union Health Ministry, were in Gorakhpur to find out how patients were being treated and suggest better protocols in the future, especially for AES.

Adityanath said he had asked Chief Secretary Rajiv Kumar, who accompanied him to the hospital, to personally inquire into both “the cause of death of the children” and also “the reason for oxygen supply shortage”. “Hum nishkarsha par pahunche ki is pure prakaran ki jaanch awashyak hai (We have decided that an inquiry into the entire episode is a must),” said Adityanath, adding that he wouldn’t let this happen again.

Adityanath said he had fought for the children of Eastern Uttar Pradesh from “sarak se sansad (roads to Parliament)” and added that not just in Gorakhpur but anyone because of whom any life is lost across the state would not be spared. “Itni kadhor karyawahi Pradesh sarkar karegi ki woh manak banegi logon ke anushashan mein rehke karya karne ke bare mein (The state will take take such strict action that it will become a marker for how to work with discipline).”

The CM said BRD Medical College caters to over 5 crore people of Gorakhpur and neighbouring areas, has about 950 beds and over 3,000 to 5,000 people visit it every day. Ninety-eight children are admitted in its NICU at present, he added, while hinting that things were not that bad at the community health centres in neighbouring areas.

Telling the Congress “not to do politics and show sensitivity over the issue”, Adityanath said Ghulam Nabi Azad should not forget the statement he gave as Union Health Minister while visting BRD Medical College. “He had said then that he cannot do much in the cases because it is a state subject,” said Adityanath.