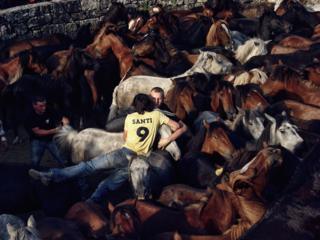 The creative community EyeEm has announced the 100 finalists for its annual photography competition. Split into 10 categories, the awards received more than one million submissions from 100,000 photographers in 150 countries.

The shortlisted images will be exhibited at the Berlin Photo week in October when the category winners and Photographer of the Year will be announced.

Here is a selection of the finalists’ work:

In the Photojournalist category, David López Fernández took this photograph of A Rapa das Bestas, a traditional celebration in the village of Sabucedo, in Galicia, Spain.

Here, the semi-wild horses which are left to roam freely throughout the year are rounded up so their owners can delouse them, trim their manes, and brand the foals.

Sandra Morante’s photograph in the Traveller category shows the moment a young Buddhist novice looked at the photographer during a ceremony at a temple in Larung Gar, in the Sichuan province of China.

In the Creative category, Caterina Theoharidou submitted this image from Italy which she says is “a union of two souls”.

Katerina Mavrodi’s submission from Russia in the Portraitist category is entitled The Unintended and aims to mix stylistic elements of Victorian art and art nouveau.

Dimpy Bhalotia captured this image at a camel fair in Rajasthan and it is one of the finalists in the Traveller category.

In the Creative category, Jumo Avilés aims to explore ideas of care, protection and delicacy in a metaphorical way to understand our current relationship with nature.

Gaile Juknyte’s entry taken on a crowded commuter train in Shinjuku, Japan, was entered in the Street Photography section.

Marlon Villaverde took this photograph of a Holy Week procession in his home town of Lucban in the Philippines, which was submitted under the Photojournalist category.

Bimo Pradityo submitted a photo in the Mobile Photographer category of a batik craftmaker in Yogyakarta, Indonesia.

In the Foodie category, Cecilia Di Paolo’s entry symbolises how she feels about moving from place to place every year and having to start again.

Reinold Aryee’s photo was taken in Canary Wharf in London after a portrait shoot, and was submitted under the Architect category.

All images copyright of the individual photographers named.