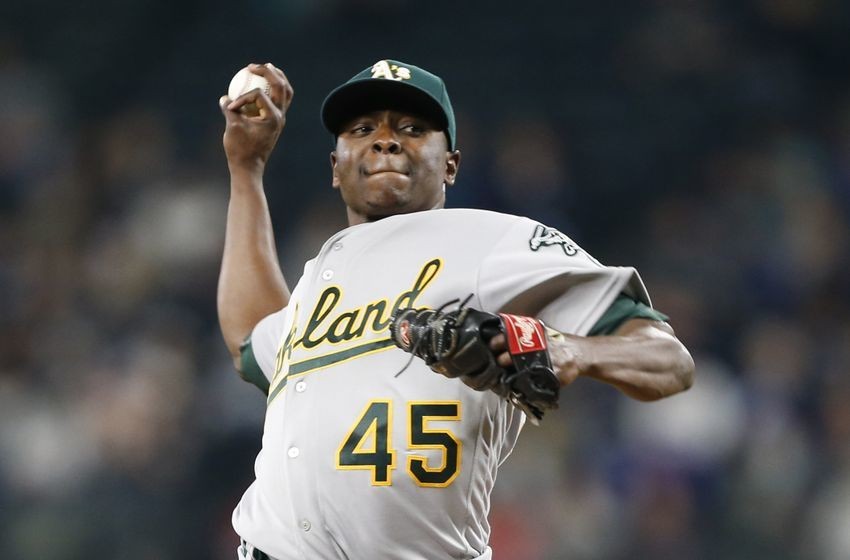 I guess you win some, you lose some, amiright? Tonight was on the losing end, as the A’s battled hard, but ended up on the short end of the stick after a freak play in the sixth took out both Ryan Healy and the A’s chances of winning the game. And it’s funny, the A’s had plenty of later chances to recover and take the lead, but two really horrific at-bats by Yonder Alonso and Khris Davis after one really great at-bat by Rajai Davis stranded the bases loaded with first two, and then three outs. The A’s had a million chances to win this game; they racked up 14 hits, after all, but just couldn’t maximize their scoring opportunities. Blackburn probably deserved better than he got.

The A’s were first on the board right out of the gate tonight, as back-to-back-to-back singles by Rajai Davis, Marcus Semien and Ryon Healy plated their first run. To be honest, Steven Matz probably thought he was re-living his last start; the one where he couldn’t retire a batter. But suddenly, Khris Davis hit into a double-play, Chapman struck out, and the A’s were retired instantly with only a single run to show for their first inning.

Paul Blackburn’s first two innings were perfect as he set down the Mets in order. He recorded the first two outs of the third easily enough, but a bloop (by the pitcher, no less) and a blast, as they say, cost him dearly the next two batters, and just like that, it was 2-1 Mets. The A’s would rally in the fifth as a single from Rajai Davis and a “stolen base” (read: picked off and made it to second, after the replay was overturned) and a single from Semien tied the game. They would even take the lead as Semien stole second, moved to third on a Healy single and scored on a Khris Davis sac fly. It must be said, I’m not sure I’ve ever seen anyone as conservative as our third base coach. I must have looked up three, four, or five times tonight with a runner being held on third base. Not that I want to call him any “alpha male” names (tm the Mets’ announcers), but I would appreciate a little more aggressive base-coaching, to be honest.

With the A’s leading 3-2 in the sixth, Blackburn finally found trouble. A lead-off walk and a one-out single ended his night, and a sure-fire double-play, absolutely-smoked ball to first should have ended the inning had it not taken a wretched bounce off Healy’s head to load the bases instead of ending the inning. The subsequent single plated two, giving the Mets the 4-3 lead, but as the A’s recorded the second out by miles at third as the baserunner tried to advance, an ill-advised throw by Matt Chapman (not his best game) threw the ball into the outfield corner in which no A’s players resided. The Mets scored their fifth run easily.

A walk and a blast (Conforto’s second of the game) increased the Mets’ lead to 7-3 and the game was all but over, except for the A’s great opportunity at an eighth inning comeback. A single by Joyce opened the inning and a one-out double by Phegley put runners on second and third (again, a looooooooooong one out double failed to score the run). Jed Lowrie came through with an RBI pinch-hit single to bridge the deficit to 7-4. Rajai Davis put together an incredible at-bat to load the bases for the A’s and Marcus Semien’s single plated one more, to put the score at 7-5. Change pitchers.

Yonder Alonso popped up the second pitch he saw for the second out, and Khris Davis struck out to end the inning, and the A’s hope for the rest of the night.

Sean Manaea will take the mound for the second game of the series; we’ll see you back here at 4:00PM tomorrow. Pass the wine.