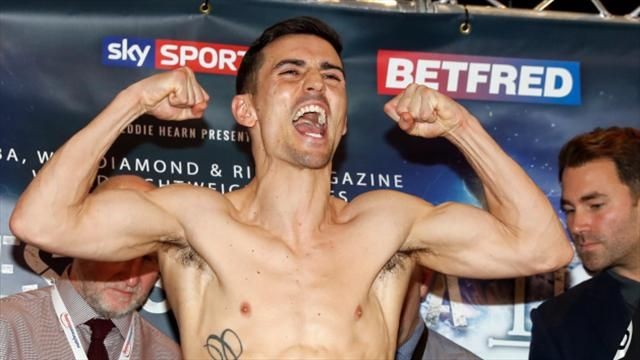 Former world titleholders Anthony Crolla and Ricky Burns, both coming off losses, will meet in a lightweight fight and look to make a statement that they deserve another title opportunity.

“What a fight between two great warriors,” Hearn said. “Both Anthony and Ricky are in similar places in the careers and they know that this absolute must-win. Knowing these two like I do this is going to be a fight until the finishing bell with neither taking a backward step. It’s an all-British super fight between two great [former] world champions.”

Crolla (31-6-3, 13 KOs), 30, won a lightweight world title by fifth-round body-shot knockout against Darleys Perez in their November 2015 rematch and he made one successful defense against dangerous puncher Ismael Barroso before losing the belt by competitive decision to Jorge Linares last September. Then Crolla lost a much more lopsided decision to Linares in their March rematch, leaving Crolla having lost two fights in a row.

“All I want to do is be involved in big fights and Ricky Burns is a three-weight world champion. I’ve got a lot of respect for him,” Crolla said. “He’s a great fighter and only lost to the very best. I’m looking forward to going to battle and putting on a display for the fans. Camp started a few weeks ago and I’m in a good place.

“It’s at a good time for both of us. A win puts us back in the mix for titles. I’m not going to say the loser has nowhere to go, but it’s going to be a tough road back. We’re both coming off losing our world titles and the incentive is to win the fight and get back in the frame. I could have a tune-up fight on the undercard of somewhere and an easier opponent to get me back into things and then a big fight after but I’m not interested in that.”

Burns has won world titles at junior lightweight, lightweight and junior welterweight and is one of Scotland’s most decorated fighters. He is Scotland’s only three-division titleholder. He won a vacant junior welterweight belt by eight-round knockout of Michele Di Rocco in May 2016, defended it by decision against Kiryl Relikh in October and then lost the belt by one-sided decision to Julius Indongo in April.

Now he is moving back down to lightweight to face Crolla.

“It’s going to be a great fight,” Burns said. “People want to see it and now the deal is done I’m looking forward to it. It doesn’t bother me where I fight. There will be a good crowd coming down from Scotland. It’s a fight the fans have been getting up for and I’m sure they will turn up in their numbers. When I held world titles at [junior lightweight] and lightweight, Crolla’s name was always mentioned but it never happened. He’s a great guy and a great fighter. I don’t think you’ll get much trash talk in the buildup. The best man will win on the night.

“Crolla just fell short with Linares. Although he lost twice he didn’t take a beating. It’s a make or break fight for the both of us. Even before I fought Di Rocco I always said I just want to take it one fight at a time. I’ve been the same the whole way through my career but fingers crossed a win here can lead to bigger things. It’s going to be hard, tough fight. The two of us will come out and go for it. The fans are the real winners.”