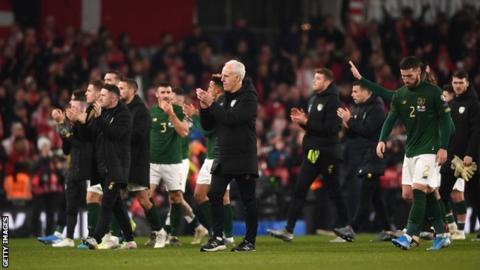 Football News A valiant performance, a vibrant atmosphere and players collapsed on the turf at the final whistle – the Republic of Ireland could be forgiven for feeling a painful sense of deja vu after their failure to beat Denmark ended their hopes of automatic Euro 2020 qualification.

They have been here before, of course. Their 1-1 draw with the Danes came 10 years to the day after Thierry Henry’s infamous handball for France in a play-off game robbed them of a place at the 2010 World Cup.

There was no injustice this time, at least, and once the sense of dejection dissipates, Mick McCarthy and his players will realize this was a very different story.

A story, also, that is not yet over, as the Republic will now contest the play-offs in March, where they are likely to be away to Wales, Slovakia or Bosnia-Herzegovina in the semi-final.

For much of the campaign such a prospect would have been a daunting one for the Irish, but after a rare performance of positive attacking play – where Matt Doherty’s 85th-minute equaliser prompted a frantic final onslaught which ultimately fell just short – they ought to feel a sense of optimism.

“Play as well as that against other teams and we can beat anyone in the play-offs,” said McCarthy.

A glimmer of hope after a difficult campaign

The Republic are well versed in the play-offs, having not qualified for a major tournament automatically since 1994 – needing play-offs for the 2002 World Cup and the 2012 and 2016 Euros.

This time, they have benefited from a change to the qualifying system which means that, remarkably, they could actually have lost their past 21 games and still been in these play-offs as a result of being in Nations League Division B.

It is fortunate they have that fallback as, while they went within one goal of an automatic spot at next summer’s tournament, in truth they have been largely underwhelming. This was probably the only good performance of their eight Group D matches.

There were some highs – late equalisers against Switzerland and Denmark, in Copenhagen. But they rode their luck in both games and ended the campaign with only three narrow wins, against Georgia and Gibraltar – ranked 90th and 196th in the world respectively.

It is not only that, but the football has been poor and tough to watch at times, a fact that made their increased attacking intent against the Danes all the more frustrating – too little, too late.

The Republic have scored only seven goals in eight qualifying games – four headers, one own goal, a direct free-kick and one goal from a shot from open play. Only 14 of the 55 countries in qualifying have scored fewer and they are all in the bottom two of their groups – and some have a game left to come.

The Republic ranked 36th for shots per game, with 12. Cyprus, Luxembourg and Kazakhstan were among the countries to have more attempts at goal, while for shots on target they ranked 42nd.

Perhaps because of the short-term nature of McCarthy’s position – when he was reappointed as manager a year ago it was also announced that under-21 boss Stephen Kenny would succeed him after Euro 2020 – there has been little incentive for him to blood young players.

Until this final game against Denmark, there has not been much sense of progression,

But despite those issues, the Republic can yet end this campaign on a high. Their play-off opponents are not yet clear but they are likely to be Bosnia-Herzegovina, whom they beat in the Euro 2016 play-off; Wales, whom they beat in 2018 World Cup qualifying; or Slovakia, against whom they have never lost in five meetings.

Better times around the corner under Kenny?

Whether the Republic qualify for next summer’s finals or not, there are significant reasons to be optimistic.

Kenny, who will replace McCarthy next August, has a reputation for playing good football. His U21 side are top of their European Championship qualifying group with a style of attractive football arguably not seen in the senior team since the first McCarthy era around the 2002 World Cup.

It is hoped he will bring an end to the largely pragmatic football of the past decade under Giovanni Trapattoni, Martin O’Neill and McCarthy MK II.

Dubliner Kenny led his side to the Toulon tournament semi-finals in the summer and they currently top a European Under-21 Championship qualifying group containing Italy and Sweden.

They drew 0-0 with Italy in front of 7,231 fans in Dublin’s Tallaght Stadium – a year after 2,325 watched them at the same venue lose 6-0 to Germany. The Republic have never qualified for that tournament in 15 previous attempts.

A progressive manager, who has always maintained playing a direct style of football is not in the “Irish DNA”, Kenny led Dundalk to the Europa League group stages in 2016 and won four League of Ireland titles with the club.

He has used a 4-3-3 formation with the U21s, with his players confident on the ball. Troy Parrott and Aaron Connolly have played for McCarthy’s senior team after good U21 performances, while Michael Obafemi, who has won a senior cap too, and Adam Idah are also at Premier League teams.

The last time there was so much hype around a Republic of Ireland youth team was the 1997 and 1998 era under Brian Kerr.

Kerr led the Irish to third place in the Under-20 World Cup in 1997, losing 1-0 to Argentina in the semi-finals. The following year he guided them to Under-16 and Under-18 European Championship glory – beating Italy and Germany in the respective finals.

Damien Duff, who was in the Under-20 squad, and Robbie Keane, a member of the Under-18 team, went on to excel at the 2002 World Cup, where the Irish were unfortunate to lose to Spain on penalties in the last 16.

If Kenny can bring another gem like that with him – perhaps Parrott, who was on the bench against Denmark – then the future may be bright indeed.