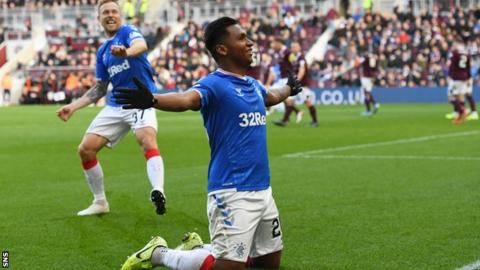 Football News
Rangers missed the chance to return to the top of the Scottish Premiership despite coming from behind to earn a draw in a testy game against Hearts at Tynecastle.

Steven Gerrard’s side were deposed from the summit after Celtic’s win over Ross County on Saturday and remain second by virtue of having scored one goal fewer than their Old Firm rivals.

The Colombian rammed in from close range just before the break to level after Japanese loanee Meshino lobbed in from the edge of the box six minutes into a frantic contest.

The point edges Hearts ahead of Edinburgh adversaries Hibernian and into 10th place in the Premiership, with both having won just once in their opening nine league matches.

Hearts live up to Levein’s billing

Rangers arrived full of confidence on the back their best top-flight start since 2010 and having won their last seven meetings with Hearts – including their last three visits to Tynecastle.

But Hearts manager Craig Levein announced defiantly pre-match that, despite the overwhelming statistics against them, it was a “day to take risks”. And a side with a makeshift defence in which Aidy White was handed a rare start began the game with a spirit that belied their recent form.

Heeding Levein’s desire to go “toe-to-toe” with the visitors, Uche Ikpeazu sent a header crashing off the underside of the crossbar within the opening seconds.

The powerful striker, back from injury, was roughing up the Rangers defence and, when captain James Tavernier was woefully short with an attempted back header, Jake Mulraney’s shot was blocked by Allan McGregor and on-loan Manchester City midfielder Meshino was on hand to loft it over the stranded goalkeeper.

Gerrard had urged his side to “embrace the pressure” of taking over at the top of the table, but they looked shaken as Nikola Katic, having returned to the side days after signing a contract extension, constantly complained about Ikpeazu’s challenges and McGregor earned a booking as he raged red-faced at a refereeing decision.

The visitors’ only threat had come from a long-range Steven Davis header by the time they were handed the equaliser by some slack defending.

Newspapers this week linked 17-year-old Aaron Hickey with Manchester City and Queens Park Rangers, but he was looking less comfortable having been switched to right-back to make way for White and was culpable on two counts.

Having conceded a needless corner, he was the one detailed to be marking Morelos, but the striker was unmarked as Katic’s header fell invitingly at his feet and he despatched low into the far corner.

By then, Rangers had been gradually imposing themselves on hosts, who were increasingly being pushed deeper towards their own penalty box and that continued after the break.

Yet the Glasgow side, perhaps with a few tired legs after nearly half their team returned from international duty, rarely looked like turning pressure into a winning goal.

Hickey, looking more comfortable at left-back after White went off with a bust nose, rightly survived a penalty shout when Scott Arfield threw himself to the ground and his side secured a deserved point.

Man of the match – Michael Smith

After weeks of being criticised for poor performances in front of their home crowd, this was an afternoon when many of the Hearts players can take confidence from their efforts.

Meshino took his goal extremely well and Ikpeazu was a constant menace to the Rangers defence, but it was one of the home rearguard who once again put in a shift to be proud of.

Michael Smith may well be edging towards the latter stages of his career, but wherever the Northern Ireland defender is asked to play, he just gets on with the job without any fuss.

Shots on Target
Home4
Away1

James Tavernier (Rangers) wins a free kick in the defensive half.

Jamie Brandon (Heart of Midlothian) wins a free kick in the defensive half.

Nikola Katic (Rangers) is shown the yellow card for a bad foul.

Sean Clare (Heart of Midlothian) wins a free kick in the defensive half.

Uche Ikpeazu (Heart of Midlothian) wins a free kick on the right wing.

Borna Barisic (Rangers) wins a free kick in the defensive half.

Sean Clare (Heart of Midlothian) is shown the yellow card.

Borna Barisic (Rangers) wins a free kick in the attacking half.

Substitution, Heart of Midlothian. Andrew Irving replaces Jake Mulraney because of an injury.

Ryan Kent (Rangers) wins a free kick in the defensive half.

Uche Ikpeazu (Heart of Midlothian) wins a free kick in the defensive half.

Attempt saved. Glenn Whelan (Heart of Midlothian) right footed shot from outside the box is saved in the centre of the goal.

Steven MacLean (Heart of Midlothian) is shown the yellow card.

Aaron Hickey (Heart of Midlothian) wins a free kick in the defensive half.

Attempt blocked. Uche Ikpeazu (Heart of Midlothian) right footed shot from the left side of the box is blocked.

Connor Goldson (Rangers) wins a free kick in the attacking half.

Nikola Katic (Rangers) wins a free kick in the attacking half.

Attempt missed. Ryan Kent (Rangers) right footed shot from outside the box is close, but misses the top right corner.