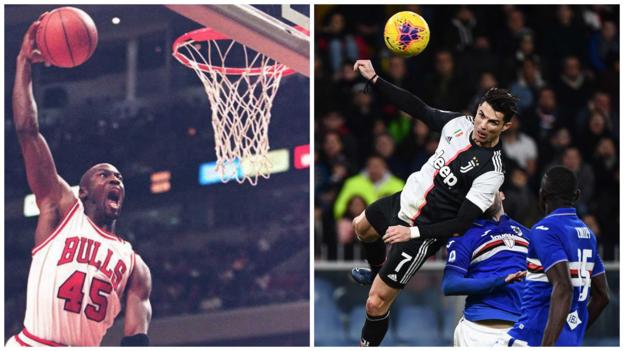 Football News : Cristiano Ronaldo Juventus forward defies gravity with jump, Football News “Ronaldo did something that you see in the NBA, he was up in the air for an hour and a half.”

That was Sampdoria manager Claudio Ranieri’s assessment of Cristiano Ronaldo’s gravity defying leap to score in Juventus’ 2-1 win against his side on Wednesday night.

The 34-year-old Portuguese produced a leap of 71cm as he met Alex Sandro’s cross at the back post at a height of 8.39ft (2.56m) – higher than the crossbar (8ft) – before heading home. His waist was at the height of the defender’s head.

It was the sort of skill seen by the likes of LeBron James and James Harden in the NBA.

Speaking after the game Ronaldo, who has scored 12 goals this season, said: “The goal was nice, but I am especially happy to have helped the team to get the three points.”

But he later compared the jump to Chicago Bull’s legend Michael Jordan, tweeting: “CR7 AIR JORDAN” with an airplane emoji.

Former Manchester United and Real Madrid forward Ronaldo has now scored 55 league headed goals over the past 10 seasons, which is at least 14 more than any other player in the continent’s top five leagues.

Mick Clegg, a former strength and conditioning coach at United who worked with Ronaldo, told BBC World Service: “It doesn’t surprise me that he can still jump like that at the age of 34 because of the way he works.

“To be able to leap that high you’re using the power which is strength and speed together. With Cristiano, the emphasis has always been on speed. So as he’s growing older he’s actually getting stronger but he’s maintaining the speed which is massively important.

“Speed comes from the brain. Everybody thinks it’s going to come from the body but it’s actually your brain’s interaction with the body that creates the speed to be able to jump that high.

“Over the years we did plenty of box jumps, single leg box jumps and double footed box jumps, on and off, that sort of thing but it’s your speed of getting your feet and your body working together as a unit that will ultimately give you that height.”