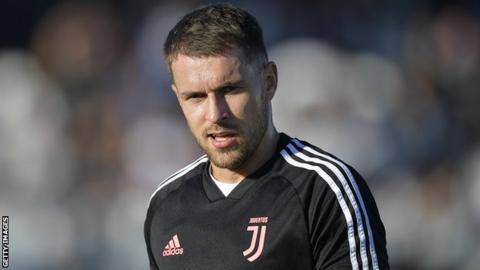 Wales will be without Juventus midfielder Aaron Ramsey for Thursday’s Euro 2020 qualifier against Slovakia.

The 28-year-old did not travel with the rest of the squad because of concerns over his fitness.

However, Wales manager Ryan Giggs is hopeful Ramsey will be available for Sunday’s match with Croatia in Cardiff.

“He felt a bit of tightness in his adductor (muscle). He trained today and we‘re hopeful he’ll play on Sunday,” Giggs said on Wednesday.

“The physio has stayed back to work with him for a couple of days.”

Wales are fourth in Group E, four points behind leaders Croatia, but have played a game fewer than the rest of the teams.

Ramsey is yet to feature in Euro 2020 qualifying because of injury and last played for Wales in November 2018.

He sat out Juventus’ win over Inter Milan on Sunday, with coach Maurizio Sarri saying the midfielder, who was on the bench, felt a twinge in his abductor’s muscle while warming up at half-time.

Ramsey has impressed in Italy since making his Juve debut on 18 September, scoring once in five appearances for the club he joined on a free transfer in the summer.