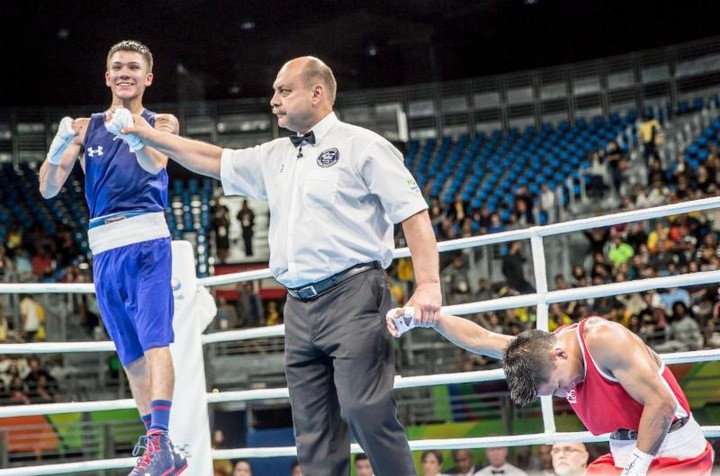 Flyweight Nico Hernandez, who claimed a bronze medal for the United States at last summer’s Rio de Janeiro Olympics, will be back in action for his third professional fight on Sept. 23, promoter John Andersen of KO Night Boxing announced Thursday.

The 21-year-old Hernandez (2-0, 2 KOs) will take on Francisco Lapizco (8-5, 2 KOs), 22, of Mexico, in the six-round main event at Hartman Arena in Park City, Kansas, not far from Hernandez’s hometown of Wichita, Kansas.

Nico Hernandez, left, is thankful that his third pro fight will occur in Park City, Kansas, not far from his hometown of Wichita. Adrees Latif/Reuters

“I’m very fortunate that my promoter, John Andersen, has worked hard to make my third pro fight at home,” said Hernandez, who also boxed at Hartman Arena in his second fight on June 17. “I’m very excited to be able to show boxing at its best.

“My opponent has never been stopped. Obviously, he has more professional experience than me, and I understand he likes putting pressure on his opponent. I want to be the first to stop this guy. I also want the boxing world to know I’m coming for belts. Champions should get ready for Nico Hernandez.”

Hernandez knocked out Patrick Gutierrez in the fourth round of his pro debut March 25 and then stopped Jose Rodriguez in June.

Lapizco is coming off a six-round decision win in January but had lost his five previous fights in a row by decision.

“This fight is a step up for Nico against a proven opponent who goes rounds,” Andersen said. “It’s time for Nico to step up, as well as the city of Wichita, in terms of supporting him. This is a major event on Sept. 23rd that will bring national attention, not only for Nico, but to Wichita.

“We have an opportunity to put Nico, all of Kansas, on the national map in boxing. We have a multifight deal to showcase Nico at Hartman Arena. After the Sept. 23rd show, we’ll announce his final fight of 2017.”