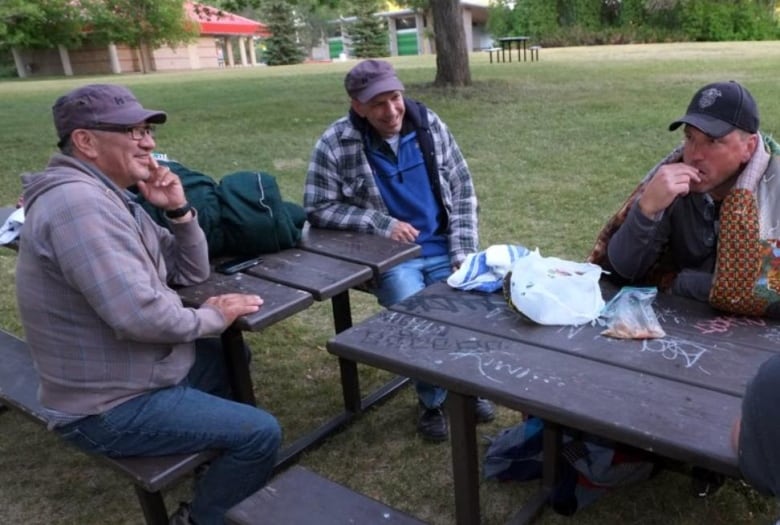 The effort to bring Pope Francis to Canada for a long-awaited apology over the Catholic Church’s role in running residential schools can be traced back to a 2016 conversation between two seemingly homeless men on a downtown Saskatoon sidewalk.

Those men — one a bishop and the other a First Nations chief — had just spent the night in a park, struggling to stay warm in the unseasonably cool June air.

It was part of a 36-hour event organized by a local shelter for HIV-positive new mothers. Chief Felix Thomas of the Saskatoon Tribal Council was paired with Bishop of Saskatoon Donald Bolen. They were given used clothing and small sleeping bags, but they had to find food, identification, health care, washrooms and other essentials.

“We spent a lot of time together that weekend, became really good friends,” Thomas, now chief of the Kinistin Saulteaux Nation, said in an interview on Friday.

What started as a conversation bore fruit this week, when the Vatican announced that Pope Francis has agreed to come to Canada at a date to be determined. In a brief statement, the Vatican said the Canadian Conference of Catholic Bishops has invited the Pope to make an apostolic journey to Canada “also in the context of the long-standing pastoral process of reconciliation with Indigenous peoples.”

‘We both realized we needed to do more’

Thomas and Bolen, who later in 2016 was named archbishop of Regina, had first met four years earlier at a Truth and Reconciliation Commission (TRC) event, where survivors such as Ted Quewezance and Eugene Arcand shared painful personal stories about the schools and the disastrous legacy it left on their communities.

But Thomas said the key moment came during the homelessness event — far from the microphones and spotlight. He and Bolen were on the sidewalk panhandling, hoping the Saturday brunch crowd would spare some change.

“People would just walk past us. They ignored you. You were invisible,” Thomas said.

“I told Bishop Don, ‘If they can ignore you, then in their mind, the problem doesn’t exist.’ But if you ignore a problem, it will never be solved.”

Thomas and Bolen, who was not available for an interview on Friday, talked about homelessness. Thomas noted that most of the homeless people on Saskatoon’s streets — queuing at the food banks and shelters — were residential school survivors or their descendants.

“We both realized we needed to do more, something substantive for survivors,” he said.

Thomas said there were many needs, but one common refrain emerged in the months and years after the TRC event: Survivors wanted to hear an apology from the Pope, on Canadian soil, as the TRC recommended in its final 2015 report.

“We call upon the Pope to issue an apology to survivors, their families and communities for the Roman Catholic Church’s role in the spiritual, cultural, emotional, physical and sexual abuse of First Nations, Inuit and Métis children in Catholic-run residential schools,” read No. 58 of the TRC’s 94 calls to action.

“We call for that apology to be similar to the 2010 apology issued to Irish victims of abuse and to occur within one year of the issuing of this report and to be delivered by the Pope in Canada.”

Thomas and Bolen consulted widely with survivors. One common location for the visit emerged — Wanuskewin Heritage Park, just north of Saskatoon. It’s been a gathering place for Indigenous people for more than 6,000 years, according to archeological records.

Wanuskewin also has geographical significance, Thomas said. The greatest concentration of residential schools sat on the treaty territories of central and southern Saskatchewan.

Thomas pictured thousands of people sitting in the sprawling river valley for the ceremony, which would incorporate various Indigenous traditions. The main building could host another, more intimate, ceremony or meeting between the pontiff and survivors.

“They could really tell their stories,” he said.

Thomas secured the support of the First Nations in the regional tribal council, followed by the Federation of Sovereign Indigenous Nations, the Assembly of First Nations, Saskatchewan Premier Brad Wall and others.

Thomas and Bolen, as well as respected Catholic First Nations elders such as Harry Lafond, then worked with church officials. The Canadian Conference of Catholic Bishops supported the plan, Thomas said.

In an interview on Dec. 14, 2016 with CBC News, the Vatican’s ambassador, or apostolic nuncio, in Ottawa, Archbishop Luigi Bonazzi, said reconciliation was a top priority for Francis and noted that “every effort” would be made to arrange a visit.

“If something wrong was done and something remains to be done, you do it,” Bonazzi said at the time.

In March 2017, Bolen and other western Canadian bishops raised the issue of a visit during a personal meeting with Pope Francis at the Vatican.

Thomas said they kept waiting for a response. Months passed. Then, in 2018, Canada’s bishops issued a statement saying Francis was sympathetic but “could not personally respond” with an apology.

Thomas said it was extremely disappointing. But the Vatican’s position appears to have changed.

This week’s announcement by the Vatican comes after the discovery in the summer of hundreds of unmarked graves across the country. A CBC News investigation has also raised questions about all three elements of the Catholic Church’s $79-million compensation pledge to survivors.

Canadian bishops, spurred by the efforts of Bolen and other Saskatchewan church leaders, recently promised a new five-year, $30-million fundraising campaign for survivors.

Thomas said much has changed since 2016, but the invitation to Saskatchewan stands.

Thomas, survivors and others have said Francis must not come empty-handed. They want compensation and full records disclosures as part of any apology.

He said survivors shouldn’t have to wait another five years for compensation, given the Vatican’s multibillion-dollar portfolio of property, artwork and gold reserves.

But it’s also imperative that he come to Wanuskewin to showcase the resilience of Indigenous people and their culture, he said.

“It could happen and it should happen,” Thomas said. “Everything is in place. This is unfinished business.”