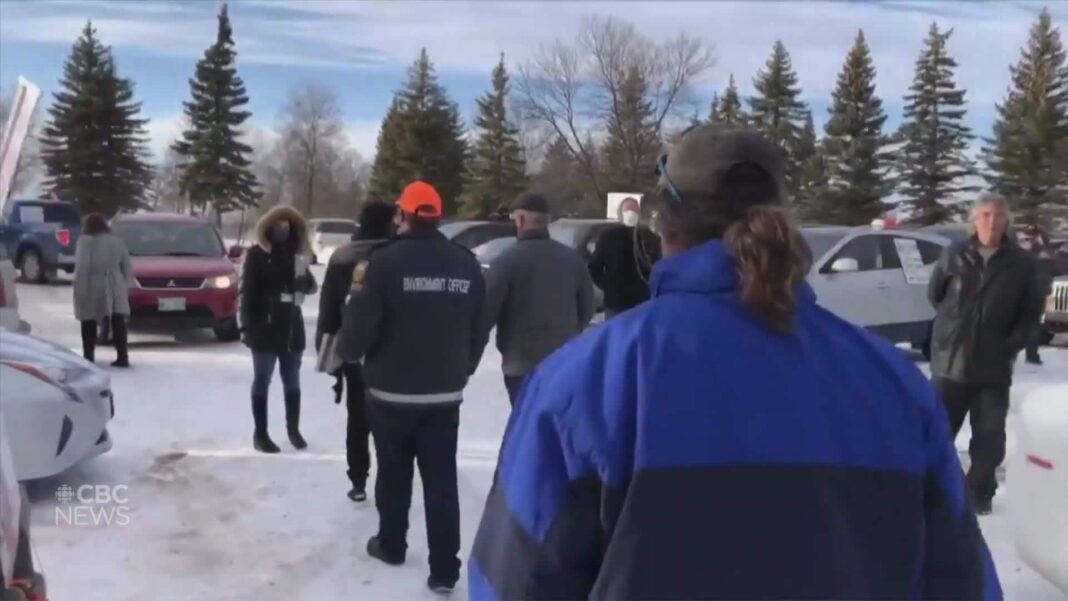 Less than an hour after Manitoba announced its highest single-day jump in COVID-19 deaths, dozens of people gathered in Steinbach to protest heightened public health restrictions implemented in Manitoba this week.

More than 100 people, including children, gathered Saturday afternoon in Steinbach, a city located roughly 50 kilometres southeast of Winnipeg, to protest against additional restrictions that came into effect on Thursday. The entire province is now in the red, or critical, level on the province’s pandemic response system.

Eva Enns, 21, participated in Saturday’s protest because she’s concerned the government is overreaching with its emergency powers by separating friends and family.

“I can’t get together with my friends like I used to,” said Enns, who lives out in the country. “It’s depressing.

“I’m not mad or angry… I just feel the measures that we’re taking aren’t right.”

Protesters were observed not practising physical distancing, or wearing protective masks. Some protesters wore other face coverings that obscured their faces, such as a Guy Fawkes mask, popularized by the film V for Vendetta. 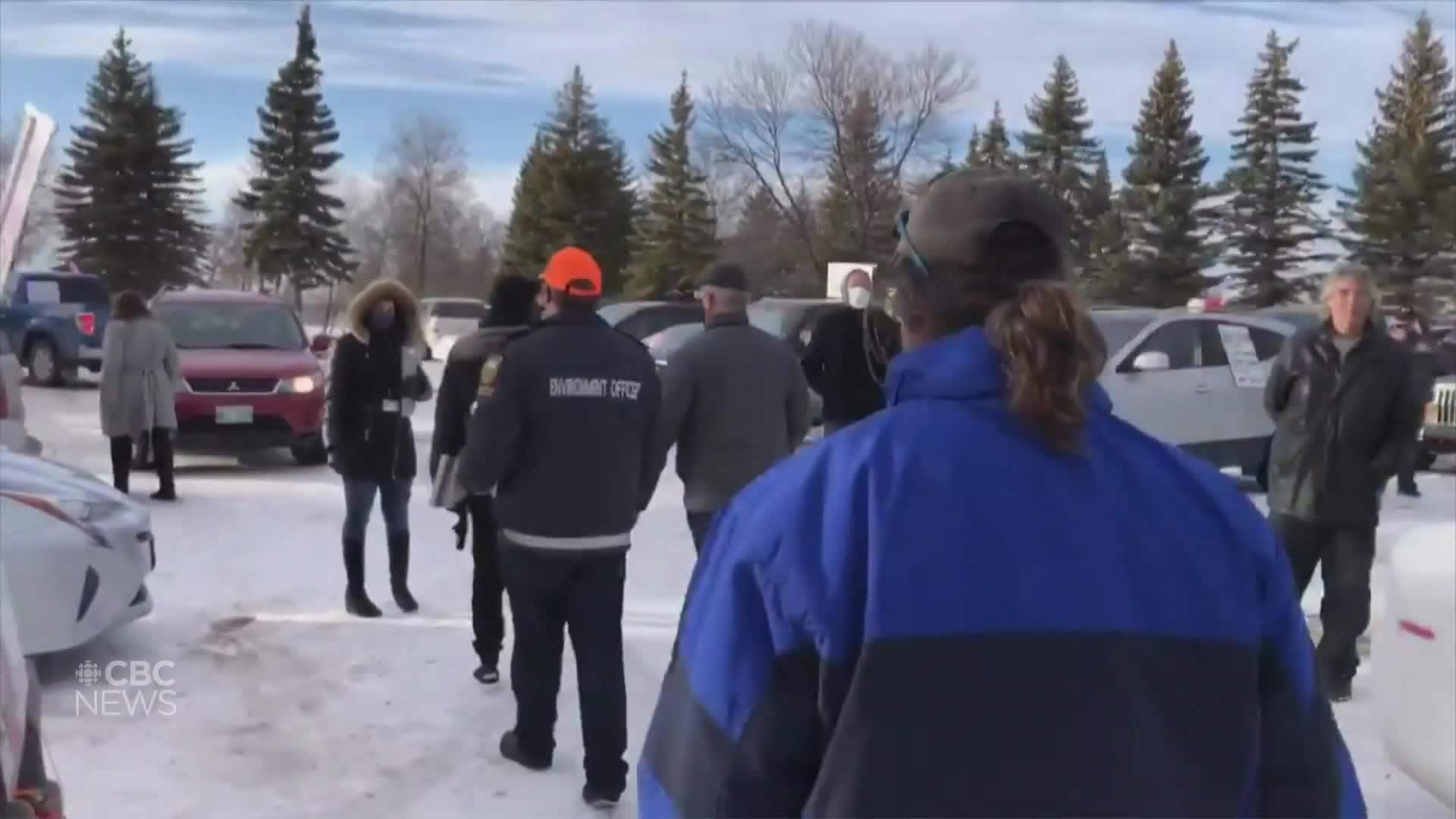 Some protesters could be heard cursing at enforcement officers issuing fines to people who broke public health rules. 0:26

Shortly before 3 p.m. Saturday, provincial environment and health officers who were in attendance started issuing fines to some of the people participating in the protest. Some protesters, in turn, could be heard shouting profanities at the officers.

One of the people issued a fine was Lewis Weiss, the elected reeve for the rural municipality of La Broquerie, which neighbours Steinbach.

Manitoba RCMP blocked vehicle access to the rally, but didn’t issue any tickets, a spokesperson for the RCMP said in an email.

“The RCMP used a measured approach during today’s event and will be working with Manitoba Public Health to further investigate breaches of the public health order,” said Const. Julie Courchaine.

“The RCMP respects individuals charter right to peacefully assemble while balancing that with the safety of the public.”

Some counter-protesters, like Bambi Bertholet, were also present but remained in their vehicles.

Bertholet, whose daughter works in health care, has been monitoring the COVID-19 cases in Steinbach and the evolving situation in the Bethesda Regional Health Centre. She felt obliged to come out Saturday to show “not everybody in Steinbach is against masks or all of the restrictions that are happening.”

“People are being treated in their cars [at Bethesda] right now, and then these guys want to come and do this?” said Bertholet. “I get that there’s a right to protest, but I have a right too.

“I feel really sad that they would come here, especially now… People are dying and the hospitals are full, and you’re still living in this denial? I just don’t get it.”

Bertholet said she is wondering what it will take for residents to clue into the seriousness of the situation.

The protest comes a day after a nurse, who works in the emergency room at Bethesda, said the facility is over capacity and the workload on staff isn’t sustainable.

It also began less than an hour after the Manitoba government announced 15 more people have died from COVID-19. The deaths occurred from Nov. 2-13, but mark the largest number of COVID-19 deaths reported on a single day in Manitoba.

Another 239 cases of COVID-19 were announced in Manitoba on Saturday. Forty of those were in the Southern Health region, which includes Steinbach.

Chief Provincial Public Health Officer Dr. Brent Roussin said the restrictions now in effect are the strictest the province has seen throughout the entire pandemic.

Retail businesses deemed critical, such as grocery stores and pharmacies, are only allowed to operate at 25 per cent capacity. Other retail businesses must close, but some can operate via curbside pickup or delivery.

Restaurants cannot offer dine-in, but can offer take out or delivery. Gyms, fitness centres and sports facilities must close. Businesses like barber shops and hair and nail salons must also shut down.

Religious and cultural services are prohibited unless they are held virtually.

Masks must be worn in indoor public places. Gatherings are restricted to a maximum of five people under the current public health rules. However, Roussin said this week that no one should be socializing with people they don’t live with.

Provincial fines for individuals who break public health rules are $1,296, while businesses can be fined $5,000.