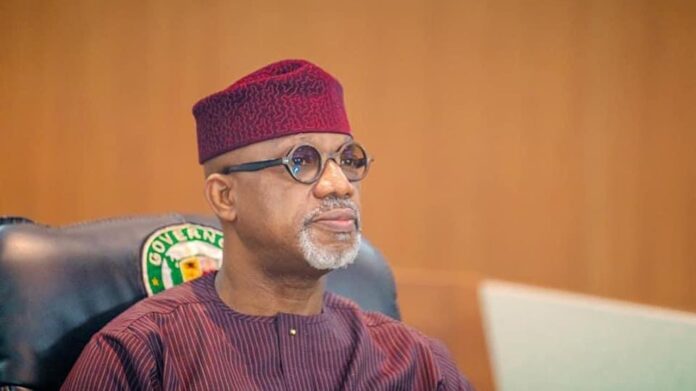 Time is fast running towards the March 11, 2023 governorship election coming up two weeks after the presidential and National Assembly polls scheduled to hold on February 25. Unlike the previous experience, the forthcoming gubernatorial election in Ogun State is so consequential that it can be regarded as a major defining moment for the future political career of some of the state actors who are hell-bent on stopping the incumbent governor, Prince Dapo Abiodun from his re-election bid.

It is no longer news that some of his adversaries are tirelessly working with the opposition to achieve their vindictive desire to foist a particular choice of candidate on the people of the state at all costs. For an unknown reason, they are unrelenting in their determination to halt the swirling tide of support and the goodwill the APC-led administration in Ogun State has been enjoying since the inception of Governor Abiodun in 2019.
It is a road they have passed through before and they know where it led them. It is, therefore, rather curious that they are still treading the same old path. As we already know, disagreement is an essential part of the dynamics of the power game. In a democracy, people are bound to disagree to agree. But disagreeing should not be allowed to take a better part of us.

As the Bible makes us understand, there is time for everything-time to disagree and agree; time for genuine introspection, and time for reconciliation. There is nothing wrong with a disagreement if it is based on principles of justice, fair-play, and equity.

However, when a disagreement is borne out of malice, vindictive drive, or narrow self-exclusivity, it often leads to endless acrimony. That is why it has been difficult to find a common ground between the authentic leadership of the APC and the members of the dissident group who are vehemently opposed to the popular will of the people.

In this case, the prolonged disagreement that has caused a loud disquiet within the party has nothing to do with either the government or the people of Ogun State. Rather, it is about self-preservation instinct, hence the frantic effort to thwart the continuity agenda of the present administration supported by all well-meaning citizens of the state. It is the backlash of the old politics of bitterness arising from the opposition of former governor Ibikunle Amosun to the emergence of Prince Dapo Abiodun as the governorship candidate of the All Progressives Congress (APC) in the 2019 general election.

The power play intrigue that culminated in the adoption of Hon Adekunle Abdulkabir Akinlade as the anointed candidate of the Allied Peoples Movement (APM) at the twilight of the last administration is already a familiar story and needs not to be retold here. But as we can all recall how the group rebuffed all entreaties to make the party work together with a united front, including the effort of President Muhammadu Buhari to broker peace at a dinner organised at Presidential Villa, Abuja, the dissident group insisted on doing it in their own way.

In the final analysis, they suffered a crushing defeat in the last election, while APC and its candidate, Prince Dapo Abiodun, won with a landslide victory. Not only that the party swept 15 seats in the state House of Assembly as well as good outing in the National Assembly contests, the dismal outing recorded by the group also left in its trail the perceived feeling of betrayal and the crisis of confidence that has continued to dog the relationship between the former governor and his estranged anointed candidate.

Though Akinlade is still licking the wound, he has since moved on. But by opting for the opposition Peoples Democratic Party (PDP) to play a second fiddle, he has undoubtedly reached the nadir of his political career. Akinlade lost relevance in Ogun State politics the day he decided to follow the dictates of his godfather to contest the last governorship election against Prince Abiodun on the platform of a relatively new party that had no structure. By so doing, he has wittingly or unwittingly cut short his political career. By accepting to go a step down the ladder to be the running mate of the PDP’s governorship candidate, Oladipupo Adebutu, he has lost the fervor and the steam that can sustain his relevance in Ogun State politics.

So also his erstwhile political godfather who has thrown his weight behind the candidate of the African Democratic Congress (ADC), Mr Biyi Otegbeye, having earlier adopted PDP for a possible alliance against Governor Abiodun. Either way, the option is not an alternative to the APC. Those who have been following the recent events in Ogun State politics could see the APC waxing stronger in the last three and a half years of the administration of Governor Abiodun in spite of the antics of his detractors. Today, the party is far more united, more formidable, and stronger than the way it was before the inauguration of this government because many of the party supporters who had been wrongly misled into the political wilderness have since retraced their steps and joined forces with the mainstream faction of the party.

That apart, virtually all who-is-who in the state have thrown their weight behind Governor Abiodun to actualize his second-term bid in order for him to continue the good work he has been doing. From traditional rulers to the traders’ association, market men and women, civil servants, students’ unions, transport unions, organized labour, and artisans, everybody has keyed into the vision of the governor to turn the state into an investment destination of choice. It, therefore, goes without saying that support for Governor Abiodun’s re-election bid has become a movement swirling across the length and breadth of the state. At different times on their different occasions, nearly all revered traditional rulers in the state have endorsed the administration’s continuity agenda. In the same way, all other relevant stakeholders have given their blessings to the sustained campaign for the continued sustenance of the developmental progress the state has recorded in the last three and a half years of the administration.

Some few months ago, enthusiastic party faithful had witnessed the homecoming of some former government functionaries from across the local governments, pledging their readiness to support the Abiodun administration to actualize its laudable programmes. Notable among the former members of the immediate past administration who have joined forces with Governor Abiodun to take the state to the next level are Senator Lekan Mustapha, representing Ogun East Senatorial District, former Deputy-Governor to Amosun, Chief (Mrs) Yetunde Onanuga, former Commissioner for Local Government and Chieftaincy Affairs, Hon. Jide Ojuko; former Commissioner for Health, Dr. Babatunde Ipaye, former Commissioner for Environment, Mr Bolaji Adeleye, and several others who have equally seen the light and returned to the mainstream Ogun APC, pledging their loyalty to the party and the governor.

With the support of all the relevant stakeholders, one can see the APC and its governorship candidate in 2023 coasting home to victory along with his deputy, Engineer Noimot Salako-Oyedele. They remain unbeatable.

Here is another opportunity for reconciliation and amends. As they say, if you cannot beat them, you join them. Former governor Amosun should swallow his pride, eat the humble pie and reconcile with Governor Abiodun if he wants to remain relevant in the scheme of things. Otherwise, it would be self-delusion for him to think that he can fight the sitting governor and win the battle. It is a fundamental error of judgement to think that he can wrest control of the party from the incumbent governor, which is the primary reason for his already nose-diving political relevance in Ogun State power politics.

There is a good lesson to learn in this scenario. One is for people to know that God is the absolute Sovereign Who appoints whom He pleases into power. While it is true that everyone has the right to scheme and aspire to lead, the ultimate power to turn such a dream into reality belongs to God. He alone can sanction or degree people’s elevation to positions of authority. By insisting on the candidature of Akinlade for the 2019 governorship election against the popular wish of the people, Amosun played God, whereas, Prince Abiodun’s emergence as the APC flag bearer had a divine anointing from the onset. That is why he has been able to survive all the antics of his detractors who are hell-bent on wresting power from him by stopping his re-election.

This Scheming for equal power sharing has shown that no lesson has been learned. In all of this, they have forgotten nothing and learned nothing. Their extreme pride and arrogance won’t let them kowtow to the party’s line of discipline or authority of the governor. The experience before and after the last elections has shown that the individuals concerned cannot be appeased.
In his futile effort to reassert himself, the former governor was recently overheard saying he remains a formidable force to be reckoned with. That was self-comforting rhetoric. In practical reality, it was an open admission of his diminishing political relevance.
But the dust had settled, then another bombshell fell. This time around, the Ogun State chapter of the National Rescue Movement (NRM) raised the alarm that Senator Amosun was plotting to replace all its candidates for the 2023 general elections with those of his adopted candidates. Even though the claim is unsubstantiated, associating his name with everything that is politically wrong in the state shows that something fundamental is amiss. It smacks of desperation to achieve some selfish ambition. The problem with power is an obsession. Once you have a taste of it, it dominates your whole life and it is all you think about. Amosun is already obsessed with power. And it doesn’t have to be so if the desire for it is for the good of the people, hence the need to eat the humble pie isn’t too late.