Federer Cruises To Victory After Comeback 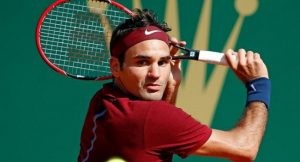 Top seed Roger Federer resumed his comeback on the grass with a 6-3 6-1 demolition of Japan’s Yuichi Sugita in the Halle Open first round on Tuesday (June 20), with the Swiss looking sharper than in last week’s shock loss in Stuttgart.

The 18-time grand slam winner won the Australian Open as well as Miami and Indian Wells before skipping the entire clay court season to prepare for an assault on an eighth Wimbledon title and the U.S. hardcourt season.

The 35-year-old’s first match last week at the Stuttgart Open was a flop when he suffered a shock loss to German veteran Tommy Haas who was ranked 302 at the time, despite leading for a set and a half.

But Federer, an eight-time winner on Halle grass, was in complete control against world number 66 Sugita — a lucky loser who replaced injured Lu Yen-Hsun — on Tuesday.

The world number five required a little longer after he wasted three match points at 5-0 before breaking Sugita again to clinch the match after 52 minutes.