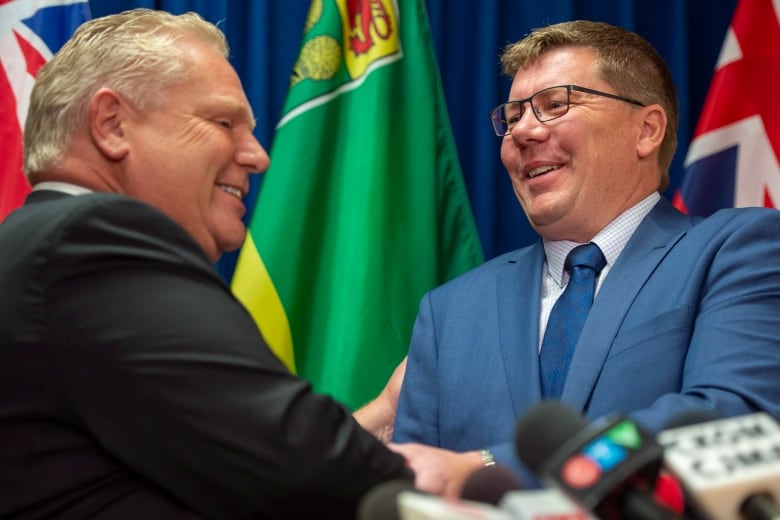 The premiers of Saskatchewan and Ontario met in Toronto on Monday to talk trade, drawing the ire of a federal minister less than a week after the two provinces decided not to send officials to a meeting of federal, provincial and territorial representatives on trade in Vancouver.

“It’s extremely disappointing to see Ontario and Saskatchewan play political games with such an important economic file after being the only provinces absent from the table at last week’s meeting in Vancouver on Internal Trade and the USMCA,” said federal minister of Intergovernmental Affairs Dominic LeBlanc in a statement.

“The Premiers need to stop putting their partisan interests ahead of the growth of the economy and the well-being of Canadians.”

On Monday, Saskatchewan Premier Scott Moe and Ontario Premier Doug Ford held their second meeting this month to discuss trade and voice their shared opposition to the federal government’s carbon plan. Ford was in Saskatoon on Oct. 4 to meet with Moe and Saskatchewan business leaders.

On Monday, the two premiers signed a memorandum of understanding to begin bilateral discussions to lower trade barriers between the two provinces.

“I am so proud to have a partner like Premier Moe work with us to make new jobs, new investment and new growth a reality in both provinces,” Ford said.

Ford said he “looked forward” to working with other province’s to bring down trade barriers. 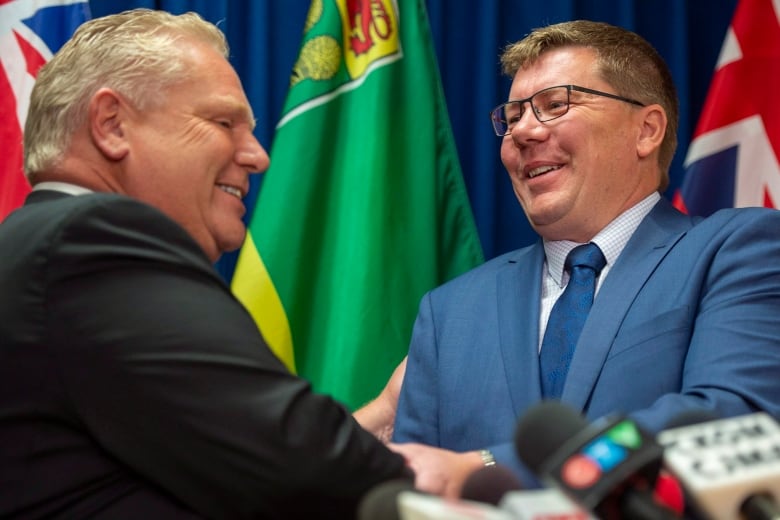 Ford and Moe after speaking about their shared opposition to the national climate plan while in Saskatoon on Oct. 4. (Liam Richards/Canadian Press)

When asked about missing the meeting last week in Vancouver, Moe said, “it is my understanding that there was six provinces not present.”

“I was disappointed that Ontario and Saskatchewan were singled out in that communication but there were six provinces that were not present at that meeting,” Moe said.

LeBlanc’s office sent the attendees list of both the ad hoc meeting of internal trade ministers and the briefing on the USMCA held on Oct. 25. According to the list provided by the minister`s office, each province and territory had at least one representative, with the exception of Saskatchewan and Ontario.

When Ford was asked why he did not send representatives he said, “we just signed an MOU and we’re going to move forward on that MOU and I’ll keep it at that.”

Ford said Canadian premiers “spent hours” talking about first aid kits at a recent meeting “when we should be doing something a little more productive. We’ll get this done and other provinces can join.”

On Monday, Saskatchewan’s Minister of Trade Jeremy Harrison defended not attending the meetings in Vancouver.

“It was an ad hoc meeting called by the feds with nowhere near the amount of notice that generally be put into these things,” Harrison said.

LeBlanc’s office said the invitation to the Vancouver meeting was sent on Oct. 5.

“I’ll tell what the purpose of the meeting was it was political and it was partisan,” Harrison said.

Harrison said premiers have raised the issue of a lack of competitiveness and that the federal government has been avoiding dealing with it.

Harrison said an “official” internal trade meeting has been called for the end of November, which the government plans on attending.

Harrison pointed out that British Columbia’s trade minister did not attend the meeting despite it being held in Vancouver.

On the MOU signed between Saskatchewan and Ontario, Harrison said the two province’s had been working on it with some intensity for the last seven to 10 days.