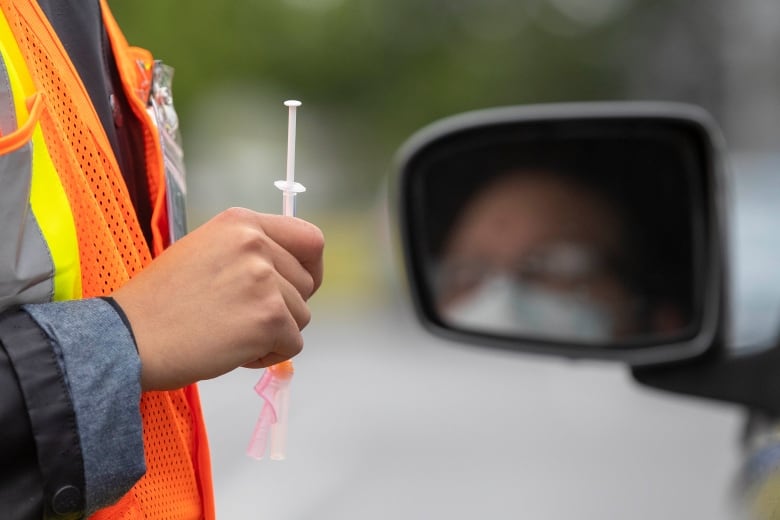 Transport Minister Omar Alghabra announced today that the federal government will soon require that all public servants be vaccinated — a mandate that he said will also be implemented by Crown corporations and other federally regulated businesses in the coming weeks.

While Canada’s vaccination rate is among the highest in the world — 81 per cent of all eligible Canadians have had at least one dose — Alghabra said the country “must do better.”

“We need to reach as many Canadians as we possibly can,” he said.

After a blitz in April and May, the number of new first doses being administered daily has been stuck at well under 100,000 since mid-June.

There are still more than 5.7 million people over the age of 12 who have chosen to forgo a shot altogether, or to wait for a later date. The number of unvaccinated Canadians is roughly equivalent to everyone living in the Vancouver, Calgary and Edmonton metropolitan areas combined.

Starting as soon as next month, the vaccine will be made mandatory for federal employees and those working in some federally regulated industries (airlines and railways, among others) in an effort to boost stalled vaccination rates.

The government says it also “expects” that other employers in federally regulated sectors — like banking, broadcasting and telecommunication — will require vaccination for their employees. “The government will work with these employers to ensure this result,” the government said in a statement announcing the new mandate.

There are more than 300,000 federal public servants and tens of thousands more people are working in industries that fall under the federal labour code.

Alghabra said the government will work expeditiously with public service unions and employers to get the mandate in place “by the end of October” at the latest.

The Public Service Alliance of Canada — which represents more than 215,000 workers, primarily in federally regulated sectors — welcomed the announcement and said it will help to keep workers and the public safe.

“PSAC supports measures to increase vaccination rates, including vaccination requirements for federal public service workers to protect our members, their colleagues and our communities,” said PSAC President Chris Aylward in a statement.

He added that any information collected as part of the forthcoming vaccine mandate must respect workers’ “legal right to privacy.”

This is not a recommendation. Intergovernmental Affairs Minister Dominic LeBlanc said that all public servants and some employees in federally regulated sectors must comply with the vaccine mandate or risk losing their jobs.

“This is a mandatory requirement to go to work in a federal workplace or work in the government of Canada,” he said.

“Obviously, there will be certain individuals for medical reasons that will not be able to be vaccinated and the appropriate officials will work with them to ensure that the appropriate measures are in place.”

There is growing concern about a fourth wave of COVID-19 as cases start to climb again across much of Canada, with the increase being overwhelmingly driven by unvaccinated people in western provinces. 1:54

Beyond the mandatory vaccination requirement for federal employees, Alghabra said, a similar mandate will be extended to “certain travellers.”

“Vaccine requirements in the transportation sector will help protect the safety of employees, their families, passengers, their communities and all Canadians. And more broadly, it will hasten Canada’s recovery from the COVID-19 pandemic,” he said.

Asked when these measures for travellers would take effect, Alghabra said the government is developing “a measured and practical approach to requiring vaccines in these sectors as quickly as possible.”

With a fourth wave of new infections poised to hit Canada in the coming weeks, experts say boosting vaccine coverage will protect the country’s health care system from again being overwhelmed by COVID-19 patients.

To date, the vast majority of new infections have been among the unvaccinated, even though they make up an increasingly smaller segment of the population.

There have been a number of “breakthrough” cases among the fully vaccinated but early data suggest those with two doses of a COVID-19 vaccine are much less likely to require hospitalization or die from the virus.

Proponents of mandatory shots maintain it’s the best way to develop herd immunity, protect the collective health of Canadians and rid the country of a very serious disease. Almost universal vaccine coverage has eradicated other diseases, such as polio and tetanus.

Critics, meanwhile, say that requiring vaccines is a heavy-handed approach that could lead to discrimination against the unvaccinated.

In a statement, a spokesperson for Conservative Leader Erin O’Toole said vaccines are “the most important tool in the fight against COVID-19” and the party encourages “every Canadian who is able to get one.”

But when asked about the federal mandate, the spokesperson said that “Conservatives support Canadians’ right to determine their own health choices.”

Before the new requirements were announced Friday, Conservative MP David Yurdiga, who represents Fort McMurray, Alta. in the Commons, said a government plan to make vaccination mandatory for federal bureaucrats was “another example of the Liberals using severe government overreach for political gain.”

Yurdiga said forcing these workers to get a vaccine is a “tyrannical” idea that should give all Canadians pause.

“Canadians deserve the right to liberty, whether they choose to be vaccinated or not. Mandating the vaccine as a requirement to work would be the beginning of a slippery slope,” Yurdiga said.

The MP said such a policy would punish Canadians for “what they choose to do with their bodies.”

“Instead of calling an election in the middle of a pandemic, Justin Trudeau should focus on working with provinces to help everyone get a vaccine,” Singh added.

While there’s certain to be resistance from some circles, at least one federal public service union said Friday it’s open to the mandate.

Debi Daviau is president of the Professional Institute of the Public Service of Canada, which represents 60,000 bureaucrats across the country. She said in a media statement that the union “welcomes all efforts to increase vaccination coverage in Canada.”

“That includes a vaccine policy in the federal government that makes vaccines more accessible to our members and accommodates legitimate reasons for which an employee may not be vaccinated.”

Mark Porter, executive vice-president of people and culture at WestJet, said the airline would be “working diligently to implement the government’s policy on mandatory vaccines for airline employees.”

“Vaccinations are the most effective way to ensure the safety of our guests and employees, while curbing the spread of COVID-19,” he said, promising to work with employees who may have questions about the new requirement.

Goldy Hyder, president and CEO of the Business Council of Canada, said requiring vaccines for some workers is “absolutely the right thing to do.

“These measures should be implemented as soon as possible” so that Canada can avoid further pandemic-related economic disruption, he said.

“We must do better if we hope to avert a significant fourth wave. Canadians and Canadian businesses cannot endure any more lockdowns.”