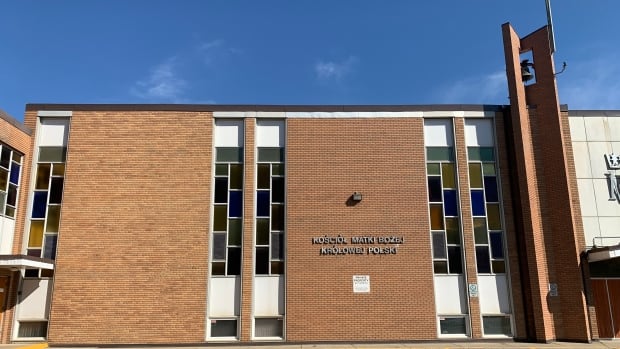 An Edmonton Catholic priest has been placed on indefinite administrative leave after denying reports of unmarked graves at former residential schools.

Rev. Marcin Mironiuk, a priest at Our Lady Queen of Poland Parish in Edmonton’s Old Strathcona neighbourhood, referred to news of unmarked graves at residential school sites as “lies” and “manipulation” in church on July 18.

He apologized for his comments on Tuesday, at the request of the Catholic Archdiocese of Edmonton.

In a statement on Friday, the archdiocese called his words “thoroughly unacceptable” and said Archbishop Richard Smith made the decision to place Mironiuk on leave on Thursday.

The archdiocese said an apology from Mironiuk will be read during masses at the church this weekend.

In his July 18 remarks, Mironiuk said he visited a First Nation in Kamloops, B.C., and asked to see the “mass graves” at the grounds of a residential school.

Tk’emlúps te Secwépemc First Nation said in May that preliminary findings — from a survey by ground-penetrating radar, combined with previous knowledge and oral history — indicated 215 children had been buried on the grounds of the former Kamloops Indian Residential School.

Since then, visitors asking to see the site have been common according to Tk’emlúps te Secwépemc Coun. Jeanette Jules.

She says 13 families have designated days this month to enter the area and pay their respects.

“That’s what we’re doing, before we allow anybody else to come,” she said.

Jules said Mironiuk should have been placed on leave as soon as he made the statements and should receive cultural sensitivity training.

She says a lot of elders in her community still believe in the Catholic Church but that it has refused to accept responsibility or formally apologize for the abuses it committed against children through the residential school system.

“We will continue to move forward on our path of what we know on the oral tellings, the oral truths, the histories of our people, and that’s what we’re going to go by,” she said.

According to the Archdiocese, Mironiuk’s Polish superiors, the Oblate Fathers of Assumption Province, will determine the priest’s future.

A priest in Winnipeg drew similar criticism in July after saying, in a series of sermons, that residential school survivors lied about being sexually abused so they would receive more money during the settlement process from the federal government.