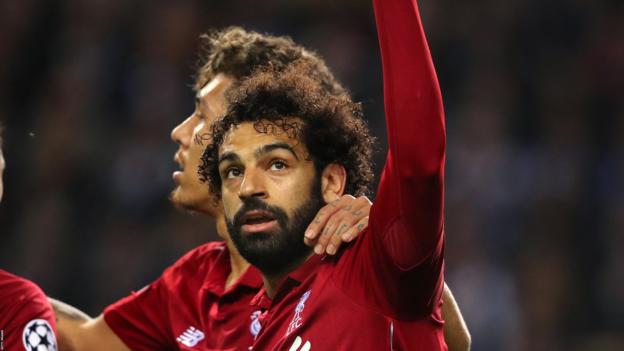 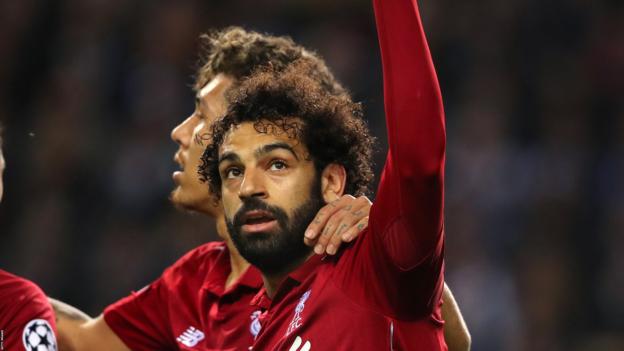 Liverpool swept aside Porto with a thumping 6-1 aggregate victory to set up a mouth-watering Champions League semi-final tie with Spanish champions Barcelona.

The Reds had been forced to survive an early bombardment in the saturated Estadio do Dragao, before Mane opened the scoring with a sliding effort – from Salah’s scuffed shot – which was confirmed by VAR.

Salah stroked in a second after the break from a superb counter-attack before Real Madrid-bound defender Eder Militao pulled a goal back for the hosts.

Liverpool reasserted their authority though with close-range headers from Firmino and Van Dijk sealing an impressive victory.

Remarkably Porto had looked capable of capitalising on a sluggish Liverpool start until Mane’s goal swung the momentum of the second leg back in the visitors’ favour.

Until then Liverpool were the beneficiaries of errant finishing from the home side – with Moussa Marega notably failing to convert any of his five chances in the opening 20 minutes.

Liverpool will face Barca – who beat Manchester United in the last eight – in the first leg of their semi-final at the Nou Camp on Tuesday 30 April (20:00 BST).

Liverpool excel in defence and attack

Mane, Salah and Firmino were all scorers when Liverpool thrashed Porto 5-0 in their last-16 tie at this venue in February 2018.

And like in that game, the Reds’ attacking triumvirate were again on the mark in another emphatic win that was underpinned by the clinical nature of their finishing.

Senegalese forward Mane’s anticipation brought Liverpool’s opener, with his 22nd goal of the season ensuring he is already two goals better off than his tally in 2017-18.

Mane and Salah’s goals arrived with the Reds’ first two efforts on target – with Salah’s strike in particular highlighting the threat Klopp’s side pose when they break with speed.

Firmino and Trent Alexander-Arnold were both involved before Salah took a touch to control the full-back’s pass and then dispatched a left-foot shot past three-time Champions League winner Iker Casillas.

While Liverpool impressed in attack with Firmino heading home the third, the strides they have made in defence were also key against relentless opponents.

Klopp paid out over £140m on Netherlands defender Van Dijk and Brazil goalkeeper Alisson to strengthen the spine of his team, and the duo again proved their worth.

Van Dijk excelled, making nine clearances – more than any other player – before his late goal, while Alisson’s positioning enabled him to gather several Porto attempts on goal with the minimum fuss.

While Porto delivered a display brimming with intensity and application, they ultimately lacked the firepower to turn the tie into a meaningful contest.

There was plenty of intent, signalled by Jesus Corona’s whipped effort inside 40 seconds, but when Porto did work openings they lacked the accuracy and power to breach the Liverpool defence.

Those final-third troubles were exemplified by Marega who had 10 shots across both legs of the quarter-final without scoring.

The Mali forward had registered goals in six consecutive Champions League appearances before coming up against opposition operating on a different level.

He twice hurried efforts when well placed required more composure with the scoreline at 0-0 on the night.

His first, a half-volley from 12-yards, was snatched at and ricocheted wide off his left shin and he then was unable to add enough power to a right-foot shot on the turn that was well saved by Alisson.

Militao’s header from a corner did provide a consolation goal but it did not prevent Porto from relinquishing their 100% home record in the competition this season.

‘It was always going to be a whirlwind’ – what they said

Liverpool boss Jurgen Klopp, speaking to BT Sport: “We played better this season. It was always going to be a whirlwind here and that was what it was. In the second half, the energy level dropped for Porto and we could control the game and score the goals.

“We are more experienced, that is clear. We had difficult away games and we knew it would be the same as at City and Roma last year. It is all good. A difficult game but we go to the semi-finals.

“It is first time for me to play Barcelona, apart from in friendlies. I am looking forward to that.”

Porto coach Sergio Conceicao: “Liverpool only had four shots on goal and scored four goals, which demonstrates the quality of their team.

“At first we did well at all levels. The one time our opponents entered our penalty area, it was a goal. We deserved more, the public deserved more, but we gave a very positive image of Portuguese football. Our Champions League was fantastic – we can not forget the campaign. Liverpool is a very strong team.”

Liverpool travel to Cardiff in the Premier League on Sunday 21 April (16:00 BST).