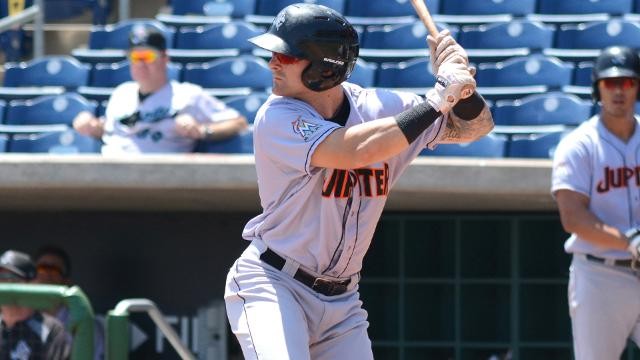 Of course, Athletics Nation provided plenty of great draft coverage here last week. But I thought I’d also take the opportunity to share my take on the A’s top 11 picks from the first 10 rounds of the draft here as well. And because you can never have too much draft coverage, you can also check out the debut episode of the Athletics Farm Podcast featuring our 2017 Draft Recap Special, which also includes an interview with A’s 6th-round draft pick, lefty Logan Salow from Kentucky.

But before you do that, you can also get my take on the A’s top draft picks right here. We’ll be learning a lot more about all the A’s top picks in the coming days and can look forward to getting the chance to see much more of them at Vermont or Arizona, or possibly even Beloit, this month. You can always keep tabs on the A’s top prospects and all the daily action in the A’s minor league system on Athletics Farm – speaking of which, A.J. Puk is set to make his Double-A debut for Midland on Monday! But let’s take a quick look right here at what we know about some of the team’s top new talent…

With their first pick in this year’s draft, and the sixth overall selection, the A’s took toolsy high school outfielder Austin Beck. The North Carolina native possesses a rare combination of power, speed and defense that made him a popular top ten pick on most draft boards. The 18-year-old impressed the A’s front office during a private workout at the Coliseum last week, and the team believes his speed could allow him to stick as a center fielder. He’s got a good enough arm to serve as a successful right fielder as well. But it’s his raw power potential that really intrigues most observers. Scouts believe Beck’s got a special bat. He underwent ACL surgery late in his junior year, which left him sidelined for most of the summer and fall of 2016, but he returned to action with a vengeance. Physically bigger and stronger than before, Beck wielded an almost unstoppable bat for his high school squad in 2017, batting .590 while belting 12 home runs and 11 doubles over 28 games for North Davidson.

With their second selection, and the 33rd overall pick, in the Competitive Balance Round A, the A’s took speedy shortstop Kevin Merrell out of the University of South Florida. The 21-year-old has a well-earned reputation as a solid contact hitter. His .384 batting average was best in the AAC this year, and he led his team in batting average in each of his three seasons with South Florida. But his bat isn’t all he has to offer. Many felt that Merrell might possibly be the fastest player in the draft, and he swiped 56 bases in 67 attempts over his three years at USF. He primarily played shortstop this year, but mainly played second base the previous season. And with his undeniable speed, many feel that Merrell may eventually end up in center field.

And finally, with their third selection, and the 43rd overall pick, in the 2nd round, the A’s took slugging outfielder Greg Deichmann out of LSU. Profiling as a bit of a Matt Olson type, the left-handed power hitter was LSU’s home run, RBI and walk leader this season. The Louisiana native played first base earlier in his college career, but his strong arm has made him an effective right fielder. And his power and plate discipline continue to improve. In his sophomore year, he hit .288 with 11 home runs and 19 walks, while in his junior season, he hit .320 with 19 home runs and 48 walks in almost the same number of at-bats. With his mature frame and advanced approach, as long as he lives up to expectations, the 22-year-old Deichmann could be a fast-mover through the system.

Allen is a bit reminiscent of another A’s middle-infield prospect, shortstop Richie Martin, who was the team’s top pick in 2015. Like Martin, Allen’s biggest tools are his speed and his defense. And also like Martin, he hasn’t shown a lot of pop. The key for both players will be how the bat develops. They both undoubtedly possess the defensive skills to stick at shortstop in the major leagues. But, unlike Martin, the 18-year-old Allen was drafted straight out of school and has a lot more development ahead of him. In addition to having good range and a strong arm, the San Diego native is also said to have good baseball instincts and an excellent attitude.

Though he doesn’t seem to possess a lot of raw tools, Toffey is a guy who seems to get the job done on the field. He was Vanderbilt’s best hitter this year, leading the team with a .354 batting average and a .602 slugging percentage, while also leading the SEC in walks. The 22-year-old managed to compile his biggest home run total this year while also posting his lowest strikeout rate. Despite Toffey’s collegiate success, some question whether his bat will really play at the major league level. But there’s no doubt that he’s able to provide solid defense and a strong throwing arm at the hot corner, and he also seems to possess a real passion for the game.

Sanchez is a big-bodied backstop with a strong throwing arm. Evaluators have not only been impressed by the strength of his arm but also its accuracy. The 18-year-old has flashed a pretty solid set of skills as a receiver despite his age. He also has the ability to hit the ball hard all over the field. There’s bound to be a bit of a long development process for any teenage catcher, but his strong throwing arm and ability to hit the ball with authority makes Sanchez a potentially worthwhile long-term investment.

After battling control issues over his first three college seasons, Salow put it all together this year to emerge as one of the top relievers in the SEC, compiling 12 saves and a 1.95 ERA while serving as Kentucky’s closer. The 22-year-old’s best pitch is a slider that’s effective against both righties and lefties, but he also possesses a low-90s fastball as well as a serviceable changeup. And with three pitches in his arsenal, there’s been talk that the A’s might consider giving Salow a shot as a starter.

Dunshee was Wake Forest’s Friday night starter in both his junior and senior seasons. The 22-year-old led the team in wins and strikeouts in each of his last two seasons while averaging just a little more than 9 strikeouts per 9 innings in both campaigns. Dunshee struck out 10 or more batters three times in his junior season and was drafted by the Cubs in the 14th round last year but elected to return for his senior season at Wake Forest.

The most important thing to know about Howard is that, yes, he really is 6’9″ – talk about a downward plane! Like Dunshee, Howard led his squad in both wins and strikeouts in each of the last two years. He’s also averaged just a little over 9 strikeouts per 9 innings this season. The St. Louis native worked primarily out of the bullpen during his freshman and sophomore seasons but has really succeeded since taking on a starting role.

Poche was the second selection for the A’s out of LSU this year after taking outfielder Greg Deichmann in the 2nd round. Baseball America named the Louisiana native a second-team All-American in his freshman year and he led his team with 10 wins in his senior season. The 22-year-old throws a lot of strikes with a fastball that sits 90-91 mph and a solid curveball. San Diego took him in the 14th round last year, but he decided to return to LSU for his senior season.

The son of Washington coach Lindsay Meggs, Jack grew up around the game. During his junior season, he was named to the All-Pac-12 team and the Pac-12 All-Defensive team. He profiles as more of a defense-first outfielder with some on-base ability but not a lot of pop.