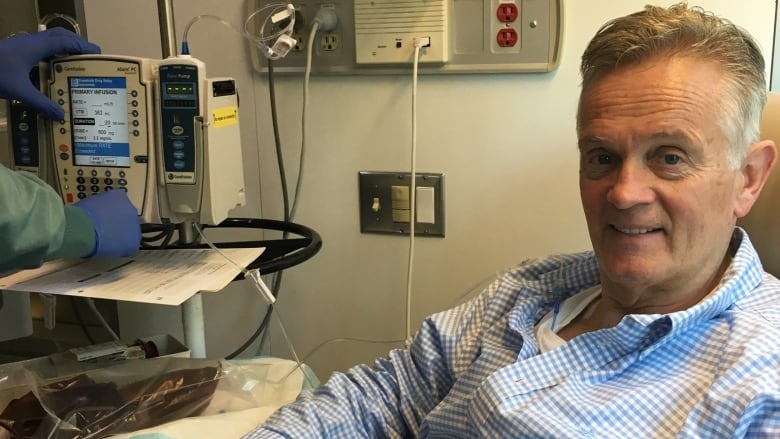 Before pancreatic cancer took his life in April, John Rothwell made his dying wishes clear: if mourners wanted to donate to a cause in his name, the money should go to an educational fund he and his family set up.

Instead, family and friends unwittingly paid for a product that puts money into the pockets of companies profiting from grief, says his son.

“My family felt taken advantage of. We were obviously in a pretty vulnerable situation, anybody who’s lost somebody they love knows that.”

Rothwell knew the obituary would be on the website of the Mackey Funeral Home in Lindsay, Ont., so he made sure it included a request for mourners to consider donating to the educational fund, in lieu of flowers.

What no one told the family is that Frontrunner — a Kingston, Ont.,-based marketing company that runs the funeral home’s website and many others across the country — uses obituaries to sell what it calls “memorial” trees and other products.

The obituary included links that said “Plant a tree in the memory of John Rothwell” and led to a different website where mourners paid for products the family knew nothing about, says Nathan.

“Family and friends spent money out of their own pockets for what they thought were my dad’s wishes,” Nathan said.

Though much more money was eventually donated to the educational fund, he says the situation was “unsettling.”

Frontrunner charges $39.95 to plant a tree which, Go Public found, is often a seedling that’s donated by outside organizations and governments and which are planted by students or volunteers, according to the Canadian Institute of Forestry (CIF), the non-profit group that co-ordinates the plantings.

Frontrunner wouldn’t tell Go Public how much it makes off those sales, or how much it gives to the CIF. But two not-for-profit tree-planting organizations say the cost of planting a seedling ranges from 20 cents to $5.

After Nathan complained and got a lawyer involved, Frontrunner removed one of the tree purchase links, doubled what mourners paid for the trees, and donated that money — more than $2,000 — to the educational fund.

But it continued to offer the trees on the memorial page of the obituary, removing them only after Go Public asked why the company was still selling trees after the family complained. In an email to Go Public, Frontrunner CEO Jules Green said some links “inadvertently remained.”

“The family is trusting them with all these arrangements… directing funds where they should go, I would think that’s integral in the agreement that was signed between the family and the funeral home,” he told Go Public.

“This should really teach the funeral home a lesson… They should know what’s going on on their website and I find it to be problematic that they didn’t,” Orenstein added.

The family didn’t proceed with legal action. Frontrunner says it did nothing wrong.

The company tells Go Public its links are added to obituaries as a default, and that it is each funeral home’s responsibility to inform them if mourners want them removed.

“Our all-in-one platform helps ease the burden surrounding a very difficult time in families’ lives by providing them with personalized, memorable, and meaningful ways to commemorate their loved ones,” Green wrote.

In another email to Go Public, funeral home owner Linden Mackey says this way of selling to mourners is “an industry standard” consumers expect.

Not so, says David Brazeau, communications manager of the Bereavement Authority of Ontario (BAO), the provincial funeral industry regulator. He says it’s not standard and that families must be clearly informed.

“It’s really important that families … understand what’s in their contract and specifically what’s in the death notice to prevent this sort of surprise from happening, because it’s really unfair to the families and may not represent the wishes of the family or the deceased,” he said.

The BAO later warned consumers and funeral providers that a failure to disclose advertising on an obituary is unethical and illegal under the Funeral, Burial and Cremation Services Act.

The act, and its rules, do not apply to the marketing company.

Contract says nothing about tree ads

The contract the Rothwells had with the funeral home lists commissions it gets from other third-party companies, including an online florist, a monument company and a company that makes memorial keepsakes, but nothing about obituaries being used to sell trees.

Mackey admits he failed to disclose the Frontrunner links verbally or in the contract, and says his funeral home’s contracts will make any sales commission clear moving forward.

After hearing from Go Public, he also removed the memorial product ads from the Mackey Funeral Home’s website.

Mackey says over a three-month period, he got an $85 commission from Frontrunner, which he thinks is for all purchases made on his website. But he says he’s not told the specifics about his commission.

Some of the money from the tree sales also goes to the Canadian Institute of Forestry which receives what it calls “a nominal portion” for its role in coordinating the plantings.

The CIF wouldn’t say how much money it gets from Frontrunner, citing “contractual obligations.”

The number of trees planted from those sales is also unclear.

In 2019, a federal court found a different company’s efforts to make money off obituaries and memorial-themed products was illegal after the website Afterlife broke copyright laws.

Unlike Frontrunner and Mackey Funeral Home, which had the family’s permission to post the obituary (but not the ads), the website Afterlife was copying and pasting obituaries from other websites without families’ permission.

The class-action lawsuit involved St. John’s mother Raylene Manning who, two years after her son’s death, learned the obituary and poem she wrote for him was being used to sell digital sympathy products like candles and cards.

“I literally hit the floor. It was like someone had kicked me right in right in the heart. I was so upset,” Manning told Go Public.

“[I thought] are these people profiting from our loved ones that have passed?”

Afterlife shut down after it lost the $20-million lawsuit for copyright infringement — what the judge called “obituary piracy.”

But that didn’t stop its director, Pascal Leclerc, from continuing to sell memorial products through another website, Echovita.com.

The FAQ section of that website says it doesn’t copy and paste obituaries, and only posts “death notices consisting of basic facts: names, cities, and dates.”

Still, Echovita is the subject of two complaints filed with Quebec’s consumer protection office and at least a dozen informal complaints online, mostly allegations that its republished obits contained serious errors that confused and upset mourners.

In an email to Go Public, Leclerc says any complaints are “addressed diligently and in a timely manner” and necessary corrections are made.

As for situations like the Rothwells’, where obituaries are not lifted from other sites but still being used to make money, the BAO says it wasn’t aware of the problem until Go Public brought it to their attention. Official complaints from consumers about obituaries are rare.

One reason could be because it often falls outside the jurisdiction of some provincial regulators, whose legislation says nothing about obituaries.

For example, Alberta and Saskatchewan’s funeral regulators say they have heard of the problem, but neither province’s funeral service legislation says anything about online obituaries, and neither regulator has jurisdiction over companies operating outside the province.

Nathan Rothwell isn’t sure what the solution is, but says Canadians need to know what’s happening so they can protect themselves.

“When this issue was brought to my attention,” he said, “there is no question that I thought about my dad and what he would do in this situation.

He would not have let it go [so] I decided to pursue it… to protect others from this happening.”