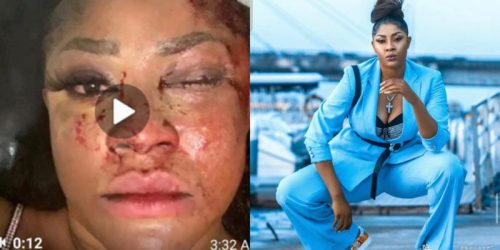 According to Yabaleftonline, a  Nigerian Twitter user who is a Medical

might have not been completely truthful with the alleged assassination attempt

on her life which has been dominating the Nigerian Media Space since last weekend.

I saw Angela Okorie’s videos. I sympathize with her but one thing glaring is that her narration and evidence don’t correlate at all.

Let’s start by stating the information she gave. She said she was attacked by assassins, they sprayed bullets for 30 minutes. No help came. She showed the aftermath videos of her self, her car, her xray.

As someone whose close relatives have escaped assassination. And lost a family friend to them, I know they don’t spend 30 minutes on a target they can finish off in 2 mins. Its armed robbers that may waste such time cos they are trying to steal as much as they can.

The only time even armed robbers spend such time spraying bullets is when robbing a bullion van or bank. Looking at the way the glasses shattered, it’s unlikely to be bullet proof. So the 30 minutes shooting sounds weird.

Let’s go into details. There is no scratch or bullet mark on the body of the car in a 30 mins gunfire. This means that either they were shooting at close range, they target very good or the glasses were not broken by bullets. 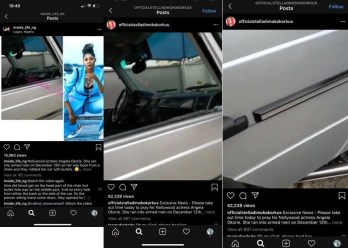 It brings the question again. If it was 1 or 2, they would have left her dead or in critical condition. And the biggest question, the glasses were broken, they had full access to the car, why didn’t they finish the job. How come the windscreen wasn’t damaged.

Now to the part that first caught my attention. The X-ray. Pellets have very high density and are distinct from bone in xrays. What I saw is either not metal pellets or the xray was of poor quality. And as you can see, they’re just hanging above the skin, no penetration.

This is how they usually look in Xray. Almost white. 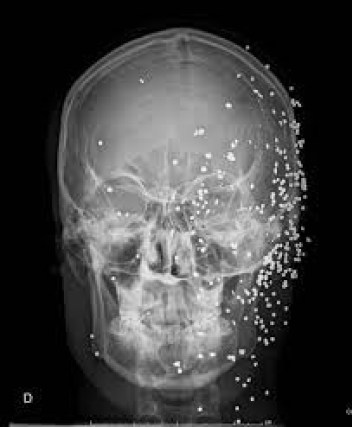 Glass was my suspicion. This is how glass looks on xray. Similar intensity with bone. More similar to the one she posted. 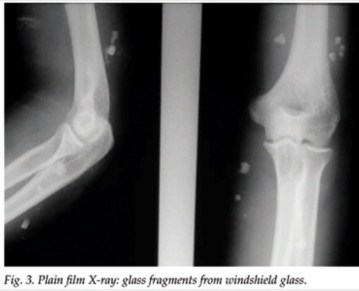 Gunshots being sprayed for 30minutes is not something that only 10 ppl will talk about. Not to talk of 1 person. In this present age, it will trend before we know she was the victim.

Back to evidence. I don’t want to screenshot her face but the injuries are not consistent with bullet wounds. Looks like someone that was in an accident or brawl. And the cuts look like glass. I may be wrong.

One big question, if it was robbers and not assassins, why lie?

Hmmmm. Now the controversial part, What will make one lie about their attacker.. First 2 things that come to mind, guilt and shame.

In Nigeria, what kind of attacker will make a victim feel some guilt or shame to expose.

Whatever you think, its your own opinion. But the only fact established in this thread is that the narration and evidence provided don’t tally. And I actually didn’t see any reason for someone that was attacked by unknown ppl to provide so much evidence. That raised brows already

If she’s actually lying out of guilt or shame and not clout or something else, what do you think the reason is among those 4 options?