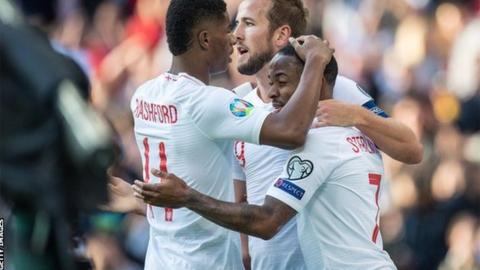 Football News Marcus Rashford says England’s attacking play is “frightening” and has the potential to inspire the Three Lions to a successful Euro 2020.

Gareth Southgate’s side’s 38 goals in 2019 is the most the national team have scored in a calendar year since 1908.

They ended their Euro 2020 qualifying group with seven wins out of eight and 37 goals, with 20 of those scored by Harry Kane and Raheem Sterling.

“I think it is a good combination,” said Manchester United’s Rashford.

“But we have played games without that particular front three and it is frightening what we can do as a group of attackers.

“I think all of these games are just gearing you up for the summer and if we go into the summer anywhere near the sort of form we have been in recently then it will be a successful tournament.”

Despite an international break in which England scored 11 goals – a 7-0 thrashing of Montenegro to secure top spot in Group A followed by a 4-0 win in Kosovo – former Premier League striker Chris Sutton said captain Kane is not certain of a starting place in the side.

Kane scored a hat-trick against Montenegro and has taken his Three Lions tally to 32 goals, making him sixth on the country’s list of top scorers.

He also won the Golden Boot at the 2018 World Cup, but Sutton told BBC Radio 5 Live he does not consider him a certain starter next summer.

“Going into the game against Kosovo, I thought two players were cemented in [England manager] Gareth Southgate’s starting XI, and that would be Harry Maguire and Sterling,” said Sutton.

“If you look at Harry Kane’s form in the Premier League this season, you would say that Tammy Abraham has played better this season for his club.

“It is not an easy decision, but if you strip everything back and look at club form in the Premier League this season, Kane would be third choice behind Abraham and Jamie Vardy.

“It’s good for Southgate that Kane is being pushed.”

Kane has six goals in 11 games in the Premier League for Tottenham, while Abraham is the English top-flight’s second-highest scorer this term with 10 in 12, one behind Leicester City talisman Jamie Vardy.

Abraham, 22, scored his first goal for England against Kosovo.

Southgate ‘realistic’ about his own future

While Southgate is planning for next summer’s European Championship, he also has one eye on the World Cup in Qatar in 2022,

Southgate will head to Qatar for Liverpool’s Club World Cup campaign next month and will look at potential team bases.

But he said the past fortnight, which featured a high-profile confrontation between Sterling and Joe Gomez, was a reminder that no England manager can afford to plan too far ahead.

Southgate said his future will “depend very much on how we get on next summer”.

“When you have a week like you’ve had, you sense that people can fall out of love with you and if there isn’t a warmth for you to continue, then that can start to affect the team,” he added.

“So, I’m realistic about how quickly those tides can turn, but we’ve always planned short, mid and long term over the past eight years.”