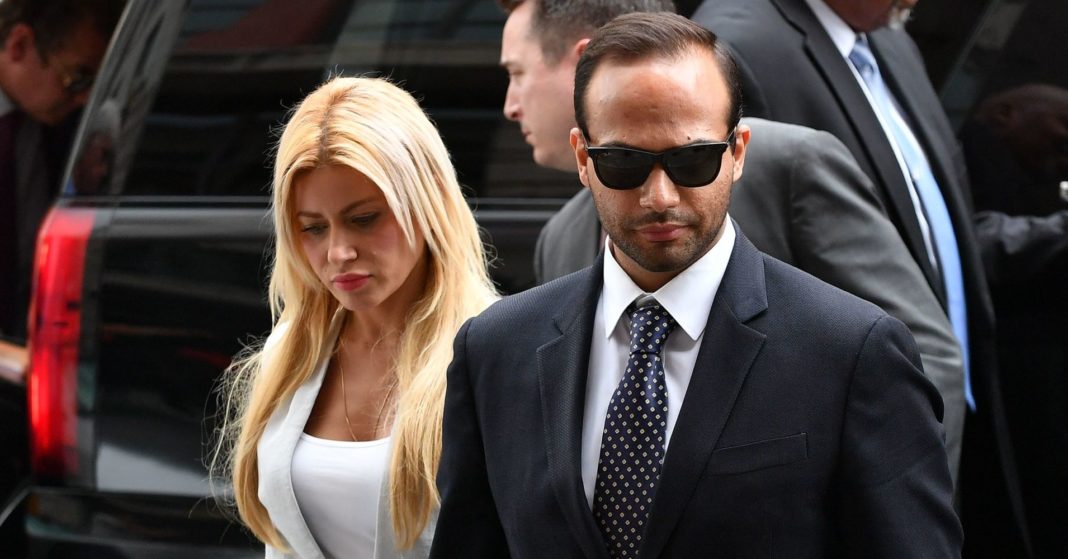 Papadopoulos’ attorneys had filed two requests in November to U.S. District Court Judge Randolph Moss asking to delay the start of his prison time. In a Nov. 16 court filing, his lawyers told the judge that the outcome of a separate appeal challenging the legitimacy of Mueller’s investigation “may directly impact the validity of Mr. Papadopoulos’s prosecution and conviction.”

But Moss denied the request, saying Papadopoulos had “failed to carry his burden of demonstrating that a delay in the execution of his sentence is warranted.”

Papadopoulos, 31, pleaded guilty in October 2017 to lying to the FBI as part of Mueller’s ongoing probe of Russian interference in the 2016 election and potential coordination between the Trump campaign and the Kremlin.

Papadopoulos will be incarcerated for 14 days — a much shorter period than the six months initially recommended by the special counsel — and will also pay a $9,500 fine, serve 200 hours of community service and remain under supervised release for a year after his release.

President Donald Trump had mocked the special counsel in a tweet after Papadopoulos’ sentencing.

In a statement, Papadopoulos’ lawyer Christopher LaVigne said his client will not appeal the “unfortunate” decision:

“The Court’s decision not to stay Mr. Papadopoulos’s incarceration is an unfortunate result in an inequitable case. At sentencing, Judge Moss himself acknowledged that he did not see ‘any reason in the record to conclude that Mr. Papadopoulos had any desire to aid Russia in any way, to do anything that was contrary to the national interest.’ Nevertheless, for practical reasons, Mr. Papadopoulos has decided not to appeal the Court’s decision or move to overturn his plea. Given the immense power of the Special Counsel’s Office and the costs to Mr. Papadopoulos of continuing to fight, he will serve his sentence tomorrow, and hopes to move on with his life.”

As a foreign policy advisor on then-candidate Trump’s presidential campaign, Papadopoulos met with professor Joseph Mifsud who had ties to Russia in early 2016. In late April, Mifsud told Papadopoulos that Russians had “dirt” on Trump’s political opponent, former Secretary of State Hillary Clinton, including “thousands of emails,” according to the special counsel’s court filings.

Democratic National Committee members’ stolen emails, which U.S. intelligence officials say were hacked by Russian operatives, have appeared to become an increasing focus of Mueller’s investigation. Some individuals who appeared to have some connections to whistleblowing site WikiLeaks, which published thousands of those emails, have since come under intense scrutiny by investigators.

Papadopoulos had lied to the FBI about the date and nature of his interactions with Mifsud. At his sentencing, Papadopoulos said “I am deeply embarrassed and personally ashamed” for lying to the federal agents.

But after his sentencing, Papadopoulos began to speak up on Twitter and in interviews about a conspiracy to undermine Trump’s candidacy during the election. In since-deleted tweets, Papadopoulos called pleading guilty his “biggest regret”; in a television interview in October, he said he was “considering withdrawing his agreement” with the special counsel.

CNN reported that Papadopoulos will surrender at a federal prison camp in Oxford, Wisconsin. A spokeswoman for that prison did not respond to CNBC’s requests for comment.