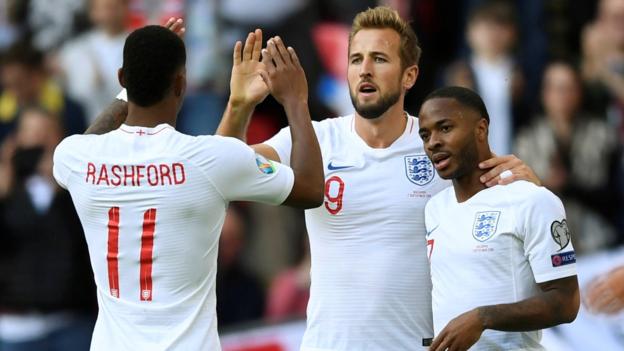 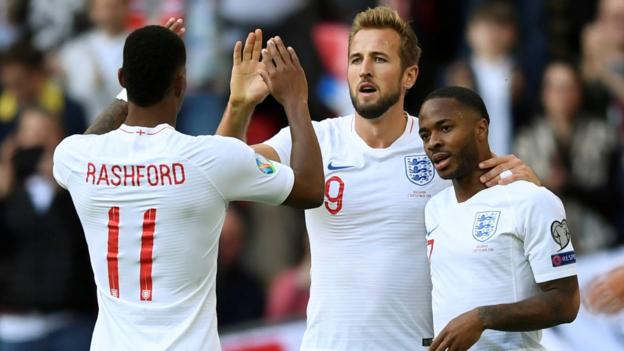 England boss Gareth Southgate says his frontline is as exciting as any team’s.

World Cup Golden Boot winner Harry Kane hit a hat-trick in Saturday’s 4-0 win over Bulgaria, with Raheem Sterling netting the other and Marcus Rashford playing alongside them.

“I think that they’re as exciting as anything,” said Southgate before Tuesday’s Euro 2020 qualifier against Kosovo at St Mary’s.

England are top of their qualifying group, with three wins from three, but only one point above Kosovo.

“I remember going to Spain and thinking ‘well, a really tough game, but actually you look at our front three and their front three on the night and I felt that we were strong’,” he said.

“And I’ve got to say, we’ve got Sancho and [Chelsea youngster] Callum Hudson-Odoi who are going to push, and really push, so I think that it is exciting.”

Tottenham striker Kane has scored 25 goals in only 40 caps, as well as winning the Premier League Golden Boot twice.

Manchester City winger Sterling is in electric form, with seven goals in six games for club and country this season, while Manchester United’s Rashford has scored seven England goals by the age of 21.

Sancho, who is still only 19, has scored 17 times and set up 27 goals in 60 games for Bundesliga side Dortmund.

Asked if his forwards know they can be among the best, Southgate said: “They have great humility. I think they possibly don’t, because they sometimes don’t view themselves as others do.

“I think whenever we’re judging games, all of us look at what hasn’t gone well and sometimes we can overlook the brilliant things that they do, that maybe other countries don’t have.”