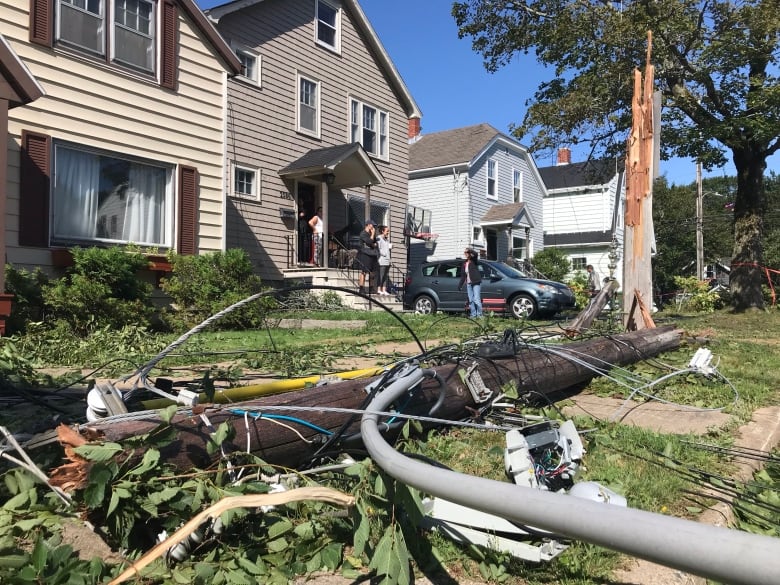 Nova Scotians were dealing Sunday with streets littered with massive downed trees, branches and snapped power lines in the wake of Dorian — a powerful storm that battered the province with torrential rain and hurricane-force winds.

Halifax was hit particularly hard by the storm, which arrived in the region Saturday afternoon as a fierce Category 2 hurricane and was downgraded to a post-tropical storm later in the evening when it made landfall near the capital city.

Trees were uprooted and resting on homes in the Halifax area, their roots exposed as they lifted up the surrounding sidewalks.

Some cellphone networks were affected by the storm or by the lack of power and crews were out making repairs.

People could be seen collecting debris from their yards in a cool, crisp wind Sunday morning, as municipal crews worked to remove larger branches.

Nova Scotia Education Minister Zach Churchill announced that all public schools in the province would be closed Monday as crews worked to assess the safety of school buildings and properties.

There was widespread damage in the coastal community of Herring Cove, N.S., just outside Halifax.

Resident Chris Lowe said around 4 p.m. Saturday, he started noticing debris washing into the lake next to his house.

On Sunday morning, the remnants of a shed and dock, a dinghy boat, red jerry cans, yellow buoys and other debris were piled high in Powers Pond, which sits close to the coast.

“It was a shame to watch it happen because we knew it was someone’s property, possibly someone’s livelihood,” said Lowe, adding that he’s not sure who is responsible for cleaning up the mess.

“It was pretty surprising…. We just thought how terrible it was and we were just worried about what was happening over on the cove side.”

Darrell Power, who also lives in Herring Cove, said he was one of many people in the area who lost wharfs and sheds.

He said boats were smashing against the shoreline Saturday, and some of those are likely damaged.

“This blue boat and white boat were just like dinky toys in the water. I’ve never seen anything like it, and 65 years I’ve been here,” said Power, standing on a breakwater scattered with large boulders Sunday morning.

In his opinion, Dorian was “way worse than Hurricane Juan.”

There were two kayaks, two tubes, a paddle board and “45 years of collecting nautical memorabilia” in the boat house.

On Sunday, people were swimming to the boat house to try and retrieve items from it.

Reyno said there were a lot of memories in the boat house.

“We used to have our Canada Day parties there and our New Years, they would do the big jump for our New Years jump,” Reyno said, referring to the annual Polar Bear Dip.

Power surmised the amount of damage to property in the Herring Cove area is likely close to $1 million.

More than 300,000 customers were still without power around 3 p.m. Sunday. Nova Scotia Power said 400,000 of its customers were in the dark at the peak of the storm.

The company warned it could be days before some people’s lights come back on as crews must cut apart trees and restore lines.

Hundreds of Canadian Armed Forces members were deploying the Halifax region to help with cleanup efforts, and hundreds more were standing by.

Dorian also left a trail of destruction in Cape Breton, where some city streets and rural roads were blocked by downed trees and power lines.

Troops were also mobilizing on the island — Sydney’s Victoria Park armoury — to help with the cleanup.

Comfort stations were opening on the island Sunday afternoon for those who need to charge electronic devices or to grab a hot drink.

The Kejimkujik National Park on Nova Scotia’s South Shore will be closed until further notice because there’s no power in the park and there are many downed trees, as well as broken trunks and branches that pose a safety risk to visitors. Parks Canada will provide an update on Wednesday at noon AT.

Shelley Allen, who lives in Queensland, N.S., said Conrads Road — which has been battered by past storms — was generally not impacted by Dorian.

“It wasn’t as bad as I expected,” said Allen, adding that her driveway washed out.

Hillary Harris, who lives on Preston Street in Halifax, said her family was watching as the storm lashed a large tree in front of their home.

“We were looking at this tree outside our house and noticing that the trunk was wobbling a bit, sort of like a wiggly tooth,” said Harris, standing on her deck in front of the uprooted tree.

“The paving stones started lifting. We could see the ground coming up, and that was really worrying. At one point we all ran to the back of the house.”

Harris said the tree then started to fall, taking power lines down with it.

“It was exciting and scary and we were sort of helpless to do anything,” she said. “I’ve never seen anything like it.”

“Anyone that didn’t do any upkeep on their sheds or cabins along the water, their wharves, they’re just completely destroyed,” she said.

One building on East Ketch Harbour Road, that she believes is a shed or a cabin, was severely damaged.

“It’s completely shattered,” she said. “The roof is just on the ground, it completely collapsed.”

The storm also battered homes and roads along the coast in Eastern Passage, N.S.

Martha Elkins and her husband Lyle live along Shore Road, just across from the ocean. As the storm roared into the region Saturday, it started flicking baseball-size stones across the road and onto their property.

“A little bit frightening, but I’ve been through several hurricanes, it was not the worst,” said Martha Elkins.

“There was so much water in the front of our yard here it almost went up to our steps,” her husband added.

Martha Elkins said “storm gawkers” then began pulling up next to their home.

“It was a circus. During the height of the storm there were sometimes 12 cars in front of the yard,” she said, adding that those people put themselves in danger, and she feels such roads should be closed during bad storms.

The lack of power prompted people in the Halifax area to descend upon open Tim Hortons restaurants for breakfast Sunday morning. Dozens of cars could be seen lined up on streets in Halifax and Dartmouth.

Emergency officials said such lineups were blocking roads and obstructing cleanup efforts. They warned people to stay off the roads.

There were no reports of injuries as a result of the storm, but a large crane toppled onto a building under construction in downtown Halifax. The province issued a stop work order for the construction site.

Dorian strengthened to a Category 2 hurricane as it approached the Maritimes with winds gusting up to 141 km/h in some areas. It weakened to a post-tropical storm as it made landfall around 7 p.m. Saturday, although winds were still high.

By 9 p.m. Saturday, 131 millimetres of rain had fallen in Baccaro Point, N.S. — on the province’s southwestern tip — while 70 millimetres was recorded at Halifax Stanfield International Airport.