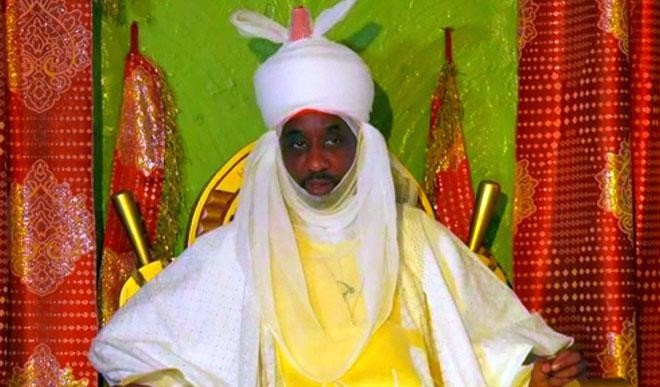 The Emir of Kano, Muhammad Sanusi II, on Thursday met with the Acting President, Yemi Osinbajo, behind closed doors for over two hours.

The meeting which started at about 2.40pm with Sanusi’s arrival was held inside Osinbajo’s office at the Presidential Villa, Abuja.

The traditional ruler emerged from the venue of the meeting at about 4.50pm into the waiting hands of State House correspondents.

He however refused to answer any question on the purpose of his visit.

He concentrated on exchanging pleasantries with some presidential aides and other members of staff as he made his way out of the premises.

As of the time of filing this report, no official statement has been issued on the agenda of the meeting and its outcome.

It will be recalled that the Kano State House of Assembly recently dropped the investigation they instituted against the Emir following a letter written to the lawmakers by the state governor, Alhaji Abdullahi Ganduje.

Ganduje had in the letter mentioned Osinbajo as one of the prominent Nigerians who intervened on behalf of Sanusi.

The Acting President had this week commenced a series of consultations with critical stakeholders over the quit notice some youths in the North handed down people of the South East to leave their region on or before October 1.

He had so far met separately with leaders of thought from the North and South East on Tuesday and Wednesday respectively.

Osinbajo will thereafter on Thursday next week meet all the parties together at a bigger meeting.

No date has been fixed yet for his planned interactions with members of the Nigerian Governors Forum on the same matter.