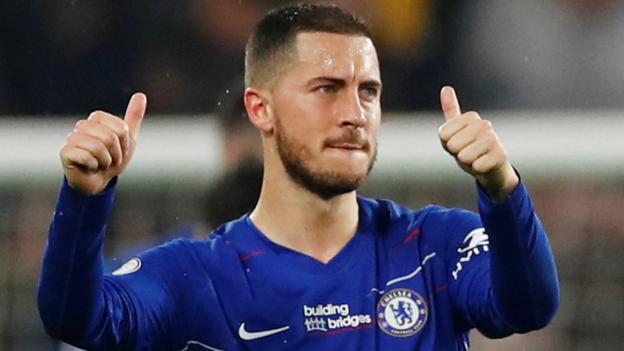 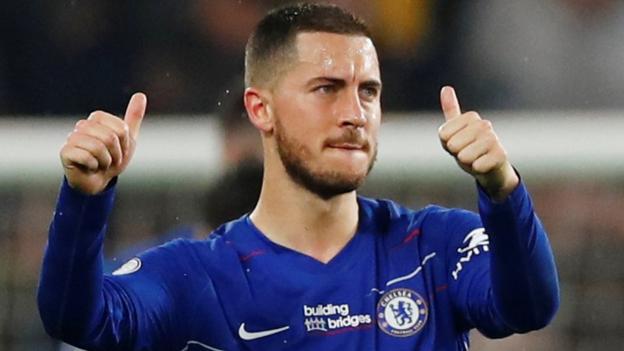 Reports on Monday suggested Real Madrid are eager to secure a £100m deal for the 28-year-old Belgium international.

Hazard later scored twice, including one of the goals of the Premier League season, in a 2-0 win over West Ham.

“Eden played a wonderful match. When he is able to play like this we are lucky because it is easy to win.

“£100m is too cheap in this market – we have seen in the last windows every price.

“The club agrees with me [about wanting to keep Hazard].

Speaking to BBC Radio 5 Live, the Italian added: “I hope that it is not true. Every coach wants to keep a player like him.

“It’s a disaster when a player like Eden decides to change team. It’s very difficult to find another player at the same level because in the world there are only two or three players at the same level.

“We have to try something different [if he leaves], not find another Hazard. In this moment he is unique.”

Real manager Zinedine Zidane said last week he has “always appreciated” Hazard, but any deal could be complicated by the Blues having been placed under a transfer ban.

They cannot register new players until January 2020 for breaking rules over the signing of foreign under-18 players. Their appeal against the decision will be heard by Fifa on 11 April.

When asked about West Ham fans singing that he was off to Real Madrid in the summer during Monday’s match, Hazard – whose contract expires in the summer of 2020 – said: “They are wrong. For now, I am just focusing on Chelsea until the end of the season.

“We still have a lot to do and then we will see.

“We have won three in a row. For the mentality, it is good to keep going. Top four and the Europa League is our target so we need to do well in both – but we can do it.”

How good was Hazard against West Ham?

Within the first half hour of Monday’s game at Stamford Bridge Hazard had:

There was plenty more brilliance in the second half, including the perfect first touch and composed finish in the 90th minute to make sure of a win which took Chelsea up to third in the Premier League, above Tottenham and Arsenal.

The goals mean that:

It was a performance to whet the appetite of any suitors…

‘I think he’s done over here’ – is Hazard on his way to Real Madrid?

There is still no deal between the clubs. They have been in talks for a while – in touch since January, I’m told – but still Chelsea want their money, so as long as Real Madrid don’t give them the money they want, Chelsea will not let him go. So still some talks to go.

I haven’t been told what Chelsea’s asking price is but we’ve seen in the Spanish press that they only want to spend a maximum of 100m euros, so about £85m. We’ll see where they end up but at the moment they don’t have an agreement.

Real Madrid want to act fast to close the deal as soon as possible, they want to announce it quickly because they need good news after the season they are having. But Chelsea are known for being tough negotiators, especially director Marina Granovskaia.

Hazard’s camp are not really briefing. He has no agent, which doesn’t help in this case, but they are quite confident a deal will get done at a certain point.

I think they want to get rid of this too because it’s been going on already for two years. Real Madrid made their first approach in November 2016, then Hazard broke his ankle with the Belgium national team so the transfer didn’t go through. Last summer they made another approach, but then Chelsea said no because they had promised Sarri that Hazard was going to stay. Hazard didn’t push for a deal at that point because they were asking a crazy fee, so he knew it was useless to go to war with Chelsea.

Is he going to force the deal if Chelsea keep saying they have to pay this and Real don’t want to pay?

I think he’s done over here. He’s been here for seven years. He’s always been happy over here – he likes the quiet life – but there is still that childhood dream. He was 10 years old when Zinedine Zidane joined Real Madrid.

Real were going to buy him even without Zidane. It’s the club who want him but Zidane returning is everything falling into place at a good moment.

Real need a goalscorer to partner Karim Benzema, and a star to keep the business model going.

Hazard has even given the step Real Madrid generally demand of showing interest in moving to Madrid. The last step is to agree a fee with Chelsea but if they demand a figure close to 100m euros, Real are willing to pay it.

Their aim is to wait for [France striker] Kylian Mbappe to get him in 2021, a year before his contract with PSG finishes – so quite possibly Hazard (or one superstar) is what they will aim for. The other two or three names they want to bring – centre back Eder Militao of Porto has been agreed – will be very good players that can go straight into the line-up.

‘Is selling Hazard for £100m even worth it now?’ Social media reaction

JP: What Hazard did to the three West Ham players in the build-up to the goal should be reviewed by PL as violation of “fair” play. Such voodoo should not be allowed. Poor Ogbonna is still sorting out his feet.

David Rowberry: Goal of the season right there.

Wale Ibraheem: Oh Eden! You are ridiculous! Madrid, your fee just increased by another £10m.

Marty: I know it’s beyond crazy to say this, but is selling Hazard for £100m even worth it now? Surely he’d be a massive help in getting to the Champions League next season and the money that would bring would be somewhere close to that.

Michael Reid: I think Hazard has just convinced Madrid to complete the deal this summer.

Ash Williams: Chelsea fans enjoy him while you can. He’s off to Madrid in the summer.

Scott: If Chelsea sell Hazard and aren’t allowed to sign a replacement then they are going to be as weak as me in a gym.