D’Tigress Players receive N1M each from Buhari for AfroBasket win 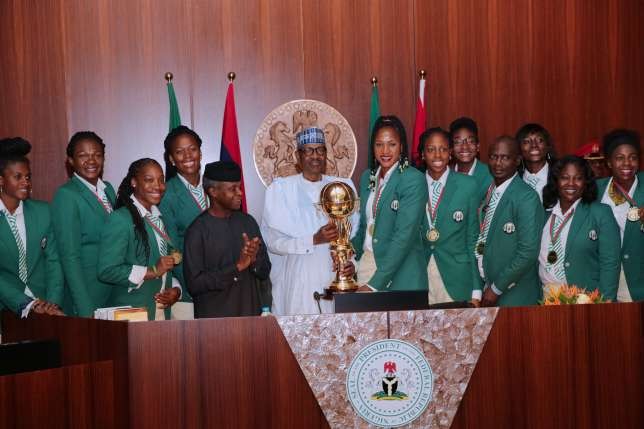 D’Tigress Players receive N1M each from Buhari for AfroBasket win

The 12 players in the team have received N1m each while the five technical crew members each got N500, 000.

Buhari pledged the sum of N1 million each for the D’Tigress as a reward for their victorious outing at the 2017 FIBA Women’s AfroBasket in Bamako, Mali.

The 12 players in the team have received N1m each while the five technical crew members each got N500, 000.

D’Tigress captain Aisha Mohammed, and Evelyn Akhator have confirmed receipt of the money.

“I can confirm that we have received our money as promised when we went to present the trophy we won in Mali to Mr President,” Mohammed said in a statement from the Nigeria Basketball Federation (NBF).

“On behalf of the team, I will like to thank His Excellency, President Muhammadu Buhari and the Honorable Minister of Youth and Sports Solomon Dalung for making this a reality.

“We must also not forget sports-loving Nigerians who were supporting us while we were battling to bring glory to our motherland.

“We believe that his Excellency will make funds available through the Ministry of Sports for adequate preparation. Like we have continued to maintain, we don’t intend to participate at the 2018 FIBA World Cup just to make up the numbers, we want to show the world that we can compete favourably with the best in the world.”

Dynamo Novosibirsk star Akhator also added that the reward from the president will play a role in convincing Nigerian born players abroad to come back and represent the country.

Courtesy of progressing to the Final, both Nigeria and Senegal had already qualified for the 2018 FIBA Women’s Basketball World Cup in Spain.