OPP move in on rail blockade by Tyendinaga Mohawk 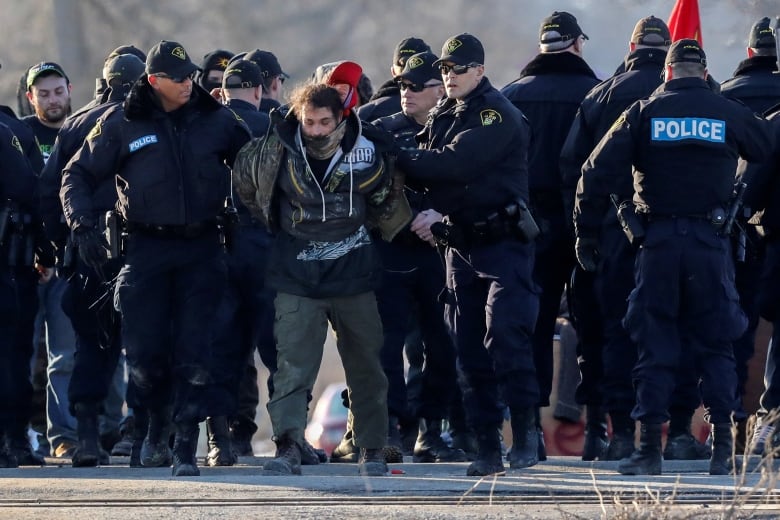 Ontario Provincial Police officers have moved against the rail blockade near Belleville, Ont., where protests by the Mohawks of Tyendinaga have crippled passenger and freight train traffic for more than two weeks in solidarity with anti-pipeline protests in northern B.C.

Police and CN Rail had warned protesters to clear the area by midnight Sunday. Police and the railway ordered the camps dismantled, warning protesters would face charges if they disobeyed.

The CBC’s Olivia Stefanovich is on the scene and describes an atmosphere of tension as dozens of police officers moved in on the protest camp around 8:15 a.m. ET.

A handful of protesters were handcuffed this morning and loaded into a police vehicle. At least one protester was wrestled to the ground soon after police moved in.

The Ontario Provincial Police have begun to remove demonstrators from the camp near Belleville, Ont. Protests by the Mohawks of Tyendinaga have shut down passenger and freight train traffic for more than two weeks. 7:58

The protest began Feb. 6 in support of Wet’suwet’en hereditary chiefs who oppose the construction of the $6-billion Coastal GasLink natural gas pipeline in northern B.C.

The OPP said in a statement Monday morning that it could arrest demonstrators who don’t comply, but added that “use of force remains a last resort.” The provincial police are enforcing an Ontario Superior Court of Justice injunction, which CN obtained earlier this month to end the demonstrations.

“We have remained respectful of the ongoing dialogue, including issues of sovereignty between our Indigenous communities and various federal ministers, and have hoped for productive communication leading to a peaceful resolution,” said OPP spokesperson Bill Dickson.

“Unfortunately, all avenues to successfully negotiate a peaceful resolution have been exhausted and a valid court injunction remains in effect.”

As of 11:30 a.m. ET, the OPP was saying it could not confirm how many protesters were detained or if any were facing charges.

‘Essential’ for barricades to come down — Blair

The Mohawks of Tyendinaga had said they would remain by the railway until the RCMP withdrew from Wet’suwet’en territory.

Earlier this month, B.C. RCMP enforced a court injunction against those preventing contractors from accessing the construction area for the Coast GasLink project.

On Friday, the RCMP in British Columbia moved its officers out of an outpost on Wet’suwet’en territory to a nearby detachment in the town of Houston. While the RCMP says it won’t stop patrolling the area, the move partially addresses a demand made by the nation’s hereditary chiefs late last week.

Prime Minister Justin Trudeau met with members of his cabinet Monday morning to discuss the blockades.

On Friday, he said that barricades on rail lines and other major transportation routes must come down after two weeks of the government calling for patience and stalled attempts at negotiation.

Public Safety Minister Bill Blair said Monday the government is committed to its reconciliation agenda, but the rail blockades have had such a negative impact on Canadians that they have to come down.

“The impact of these real disruptions and the barricades is is untenable. It can’t continue, it cannot persist. It’s absolutely essential that those barricades come down and that rail service be resumed,” Blair said after the cabinet committee meeting.

A few hundred protesters angry over the government’s handling of the file are moving through downtown Ottawa today. Ottawa police are expecting traffic disruptions near Parliament Hill and ByWard Market and are asking drivers to avoid the area if possible until further notice.